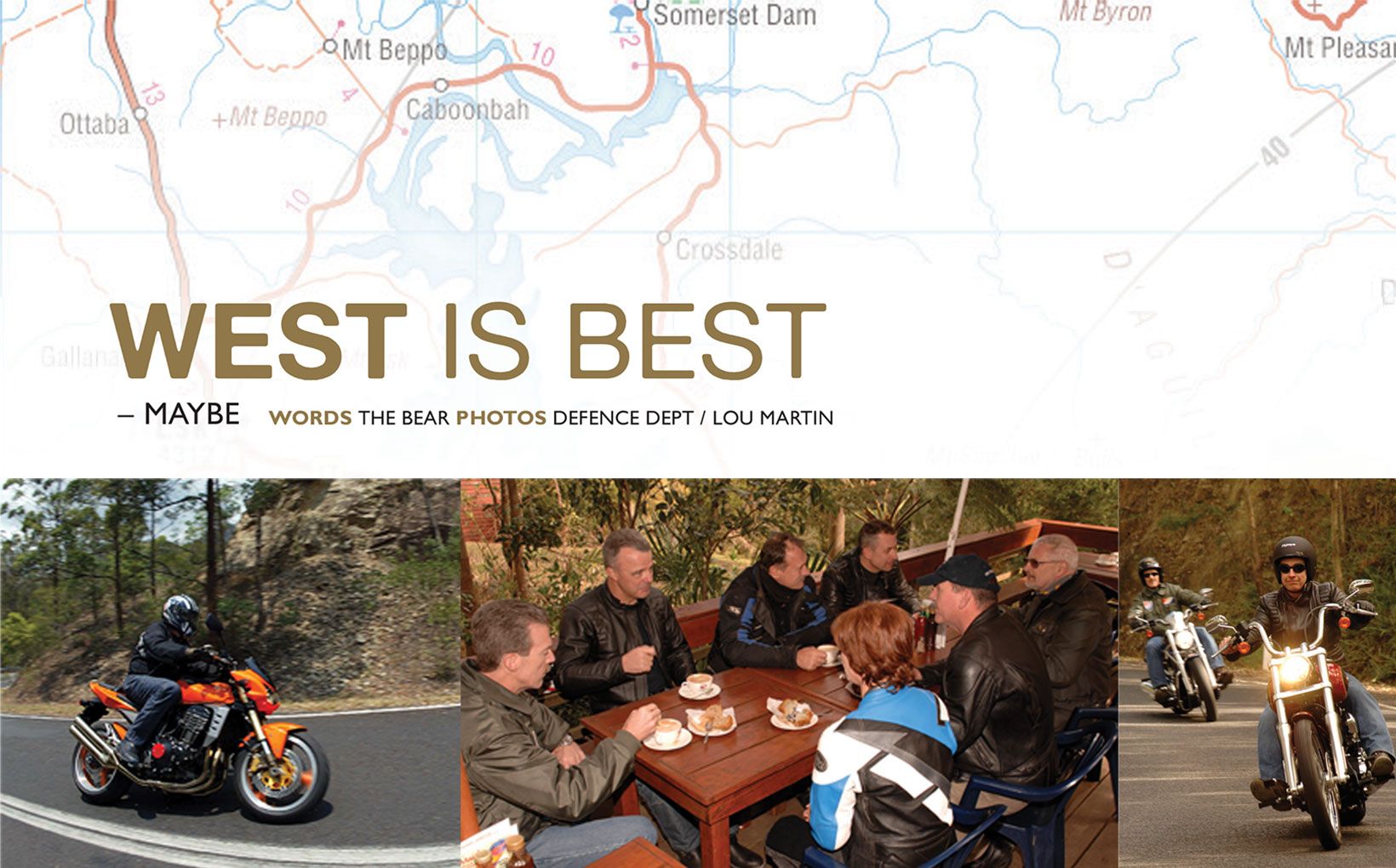 Brisbane motorcyclists are lucky folk. Well, in most ways – their State government seems to be dead set on making their lives as difficult as it can, but apart from that – what have the Romans ever done for us? Err, sorry, slipped back into Monty Python there. Don’t worry, there will be no mention of dead parrots. Brisbane riders are lucky because there is a terrifc amount of territory around the city that offers excellent motorcycling. And best of all, it’s close. You don’t find so many good roads on the doorstep of any other major Australian city except Adelaide.

And it isn’t just nearby, either. Whether you head north, west or south from Brisbane you get marvellous riding country. For this map, I just pulled together a few of the most popular bike roads near Brisbane. There are many more, and I suspect we will be revisiting the area before too long!

Theoretically not part of these routes, Haigslea is so close that I had to include it. It’s the home of the Australian Motorcycle Museum. This is at 3 Butlers Road, and opens seven days a week all year long from 9.30am to 4pm. The phone number is 07 5464 4938. We recommend it highly; the trouble is that it’s likely to use up so much of your time that it is actually better as a destination in its own right. It will certainly open the eyes of all but the most jaded motorcycle enthusiasts.

A pretty, attractive little place despite the fact that it has nothing much of note other than a big pub which apparently has decent meals – I haven’t been there at the right time of day to judge that. Whatever – it’s a good place to stop for a breather and to refuel, anyway.

Set beautifully near the ridge of the D’Aguilar Range, Mt G is a small village with a few services such as a couple of cafés. A good place to stop if you have missed seeing Mt Nebo as you’ve gone past… no, actually I think the food up here is better than anywhere in Mt Nebo, especially at the Malala Teahouse.

Much like Mt G, Mt N lies a little further down the mountain. The road through the village is quite tricky, and the speed limit is controlled rather carefully here.

There is quite a bit of choice for coffee in Samford Village, but you’re on your own when choosing the café to patronise – I have tried a couple and keep getting different quality coffee. Damned if I know what that’s about. It’s a useful place to fuel up.

Both the bakery and the pub in Dayboro get good wraps all round, and the pies at the bakery have come in for extra praise. I have eaten lunch at the pub, which is a wonderful place to watch the bikes go by on their way to tackling the road north. There also always seem to be plenty of bikes parked outside.

What would I do if I had a long summer Sunday? I’d string some of the routes together and maybe head out to The Gap before turning north to Stamford Village, then west onto the Mt Glorious Road. Follow that to the end, continue along Northbrook Parkway, turn right to ride around Lake Wivenhoe and down to the dam via Esk. Turn left here, back up to Northbrook Parkway and the Mt Glorious Road and back to Brisbane via Mt Nebo. Oh yeah. 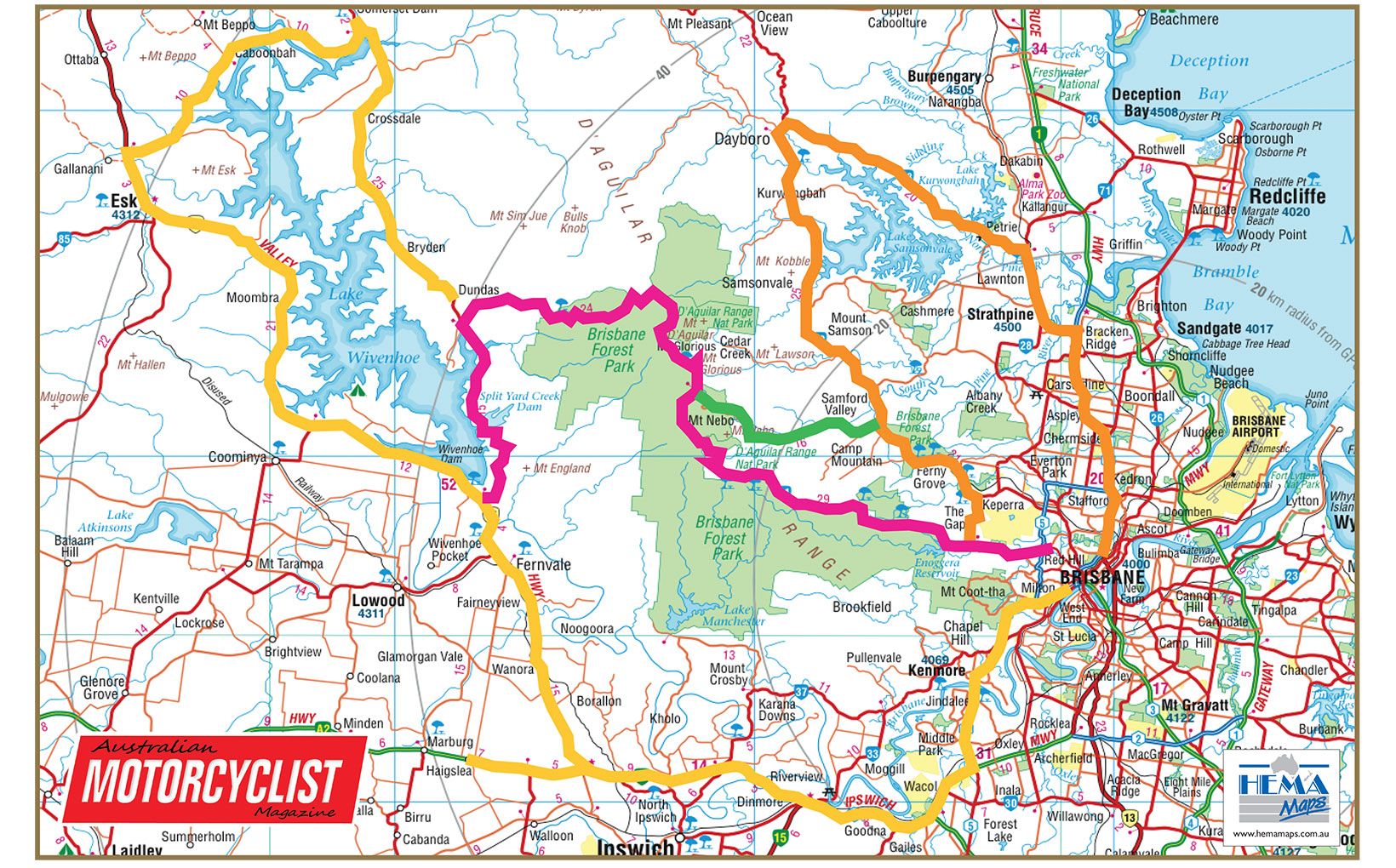 As you can no doubt see, these routes combine really well. You can start out on one and finish on another, or whatever. Let’s get started with the longest one.

Leave Brisbane in a south-westerly direction, as if you’re going to Ipswich. Don’t worry, you’re not going to Ipswich (my little joke, Col – he lives there). At some stage, no matter which way you go, you’ll find yourself on the A2 motorway, going west. Now, here is where it depends on how much time you have. If you have a lot, and are perhaps thinking of returning to Brisbane by way of our Pink Route, you could carry on along the motorway until you get to Haigslea and take a look at the Australian Motorcycle Museum (see the town information).

Should you decide to give it a miss and call in another day, you should take the exit to the Brisbane Valley Highway, about nine or ten kilometres before Haigslea. This takes you up through pleasant rural scenery to Fernvale and then along the western shore of the huge Lake Wivenhoe to the pretty little township of Esk with Mt Esk in the background. Just three kilometres north of Esk, turn right and ride around Mt Esk until you once again reach the shores of Lake Wivenhoe. Take another right turn, this one to Crossdale, and you will find yourself just about circumnavigating the lake. Unfortunately, the road doesn’t actually follow the shoreline very closely, but the scenery is pretty anyway and you do catch sight of the water fairly frequently. Best of all, there is relatively little traffic on these roads except the motorway (of course).

Just south of Dundas there is a turnoff to the left which takes you up into Brisbane Forest park and our Red Route. If you want to avoid that, and with it some of the best riding to be had anywhere in Australia, that’s fine; just continue south until you reach the Brisbane Valley Highway again at Wivenhoe Dam. From there it’s just a matter of retracing your tracks. But we would suggest you not do that…

…because we would seriously recommend that you ride back through the glorious Mt Glorious road (or is it the nebulous Mt Nebo road?). But let’s start from Brisbane, to keep all this understandable. The way to the beginning of this road is easy to find – just follow all the riders on CBR600s, NInjas and R6s and you can’t miss it. Just in case, it’s simply a matter of heading for The Gap and then continuing along Mt Nebo Road. From here, you are effectively following the line of the D’Aguilar Range.

The road is narrow and quite technical in sections, which explains why it is also a popular place for (other) riders to crash, especially on weekends. If you don’t know the road (and yes, we understand that all Brisbane riders will) then make sure you learn it before you get carried away with the throttle. It is also policed quite keenly, and the speed limit signs mean precisely what they say. Lots of cyclists on the weekend. Take it carefully.

Having said that, though, let me add that this is indeed one of the most enjoyable roads in Australia. Perhaps the best thing is to keep your steed on a tight leash until you pass Mt Glorious and find yourself in the occasionally steep and also quite tricky section that eventually takes you down to the junction with the road along Lake Wyvenhoe.

By the way, the lake does have some significance here: I once came down Mt Tenison Woods to find a 4WD towing a sizeable yacht coming up – and using almost all of the road. Ulp. Thank you, BMW, for fitting ABS to your bikes…

Once you reach the Lake Wyvenhoe road you have the choice of continuing south and returning via the motorway, or retracing your route. My money would be on the latter, unless I was very tired.

A relatively simple run, and another one that’s popular with local riders – though for different reasons from the Red Route’s. You can also start at The Gap, but there is some nice riding between Brisbane and Samford Village no matter which road you choose. After that, the road opens out pleasantly and apart from the odd “cow deposit” or farmer on a tractor it’s an enjoyable twisty run up to Dayboro. Nothing like the Mt Nebo Road with its sweeping views over the valleys to the north, but beautifully bucolic anyway.

Just out of Dayboro on the northeastern side, take Hay Road, which becomes Dayboro Road as it slips down the eastern side of Lake Somerset on its way to Petrie and Strathpine and then Brisbane by way of the Bruce Highway. As far as Petrie this is pretty similar to the road up, but after that you’re in a bit of Brisbane’s suburban sprawl.

And finally, a short but worthwhile connection. Let’s see, this is going to take a bit of explaining. Although on any map, it looks as if Mt Glorious Road is a continuation of Mt Nebo Road, this is not so. In fact, Mt Glorious Road comes up from the valley and eventually Stamford Village, and Mt Nebo Road joins it just past Mt Nebo.

Oh, look, it doesn’t really matter. Just remember that you can turn north and downhill just past Mt Nebo (going west) and you will be on an excellent and recently-rebuilt road that will take you down to Stamford Village. From there, you can go where you please!