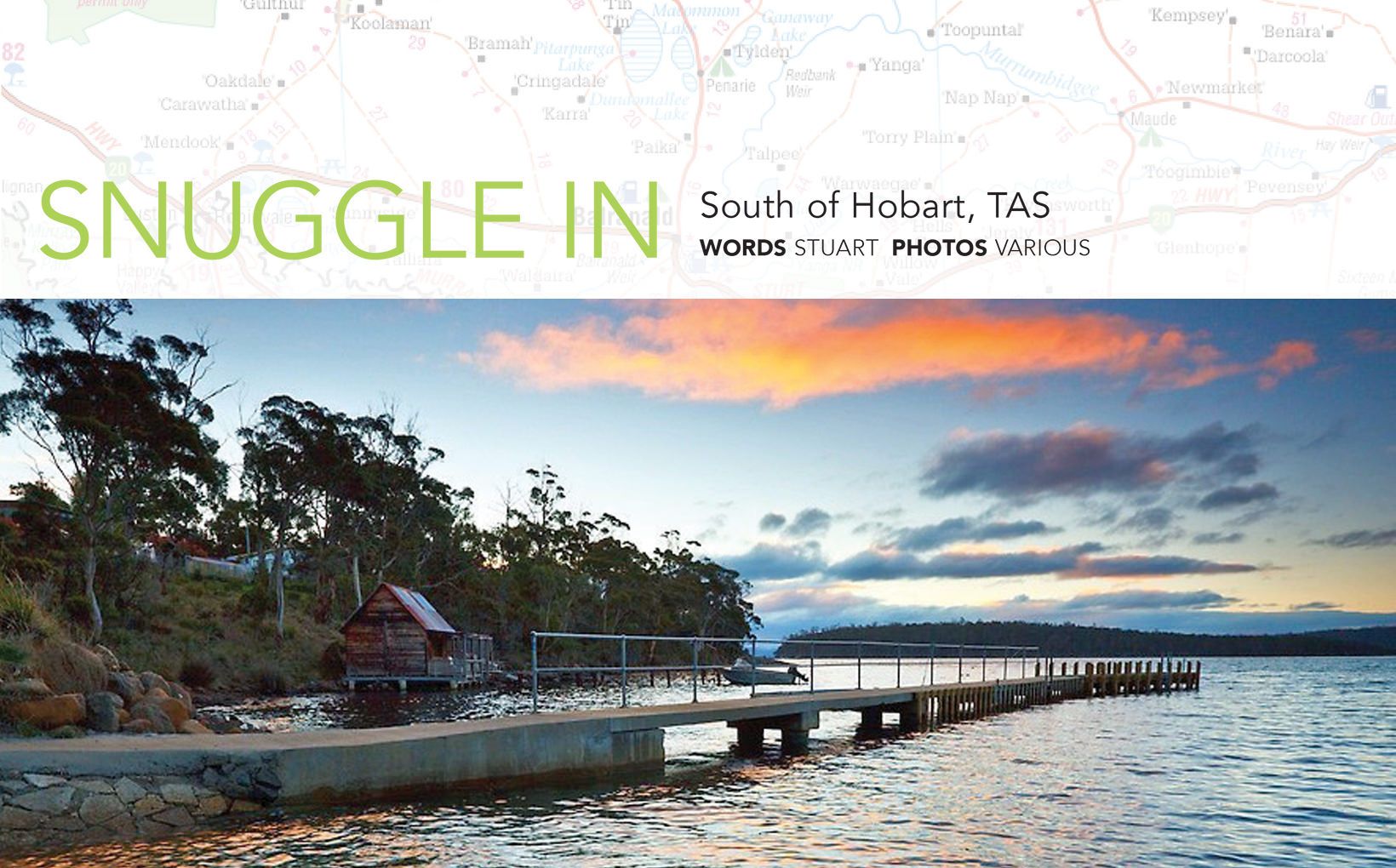 This is a short but scenic route south of Hobart with lots to do along the way.

Depending on how much you want to see and do off the bike it can be an all-day long ride.

The capital of Tassie, Hobart is a busy hub of activity. There’s loads to do and if you like food (who doesn’t!) there are many award-winning places to eat. Try to stay away from the obvious tourist traps, though. The food can be quite ordinary.

There are several motorcycle hire businesses in Hobart, so a fly in, fly out ride is possible. The other option is to arrive in Devonport after catching the Spirit of Tasmania across the Bass Strait and then making your way south to Hobart.

A suburb of Hobart that is centre to a fishing community - think, amazing seafood!

A way point to make sure you’re on the right track!

A relatively isolated location, if you want to “get away from it all”, Howden is a good start.

A small seaside town on the Channel Highway. Mostly a way point for this ride as you ride straight south towards Bruny Island.

The name Electrona is based on the Carbide Works which were established in 1909. Around 1908, James Gillies began negotiations with the State government to permit the construction of a Hydroelectric Power Scheme at Tasmania’s Great Lake, for the purpose of providing power for his newly patented zinc smelting process and a calcium carbide factory. Construction of the factory commenced in the vicinity of Snug, Tasmania in 1917, and shortly after the end of World War One the Electrona Carbide Works began production of carbide using lime (from limestone) and coke with electric arc furnaces. The carbide was used in the manufacture of acetylene gas. Gillies chose the name Electrona because of the electricity and electrodes used for smelting.

As you approach Lower Snug from Electrona there is a right turn to the beautiful Snug Falls. Take Snug Tiers Road and around a kilometre in, veer left on Snug Falls Road. There is a carpark just before the Snug Falls Track which is a two kilometre return walking track to the Falls. They are particularly spectacular after heavy rain.

Sleepy Woodbridge is one of the prettiest little towns on the D’Entrecasteaux Channel, overlooking Peppermint Bay and the northern end of Bruny Island, Woodbridge is a scenic hotspot for local produce and craft.

A way point for this ride as you make your way back north alongside the Huon River.

As you leave the scenic edge of Kangaroo Bay you head through Cygnet which has a couple of nice places to eat. A couple of kilometres out of town, Pagan Cider Cellar Door is quite nice with a variety of berry flavoured ciders.

Get some fuel if you need it, but definitely check out Cat’s Tongue Chocolatier or Banjo’s Bakery for some great sweet treats.

This particular section of road is used for the Targa Tasmania rally so it’s time to heat up the edge of those tyres before you roll back into Hobart. 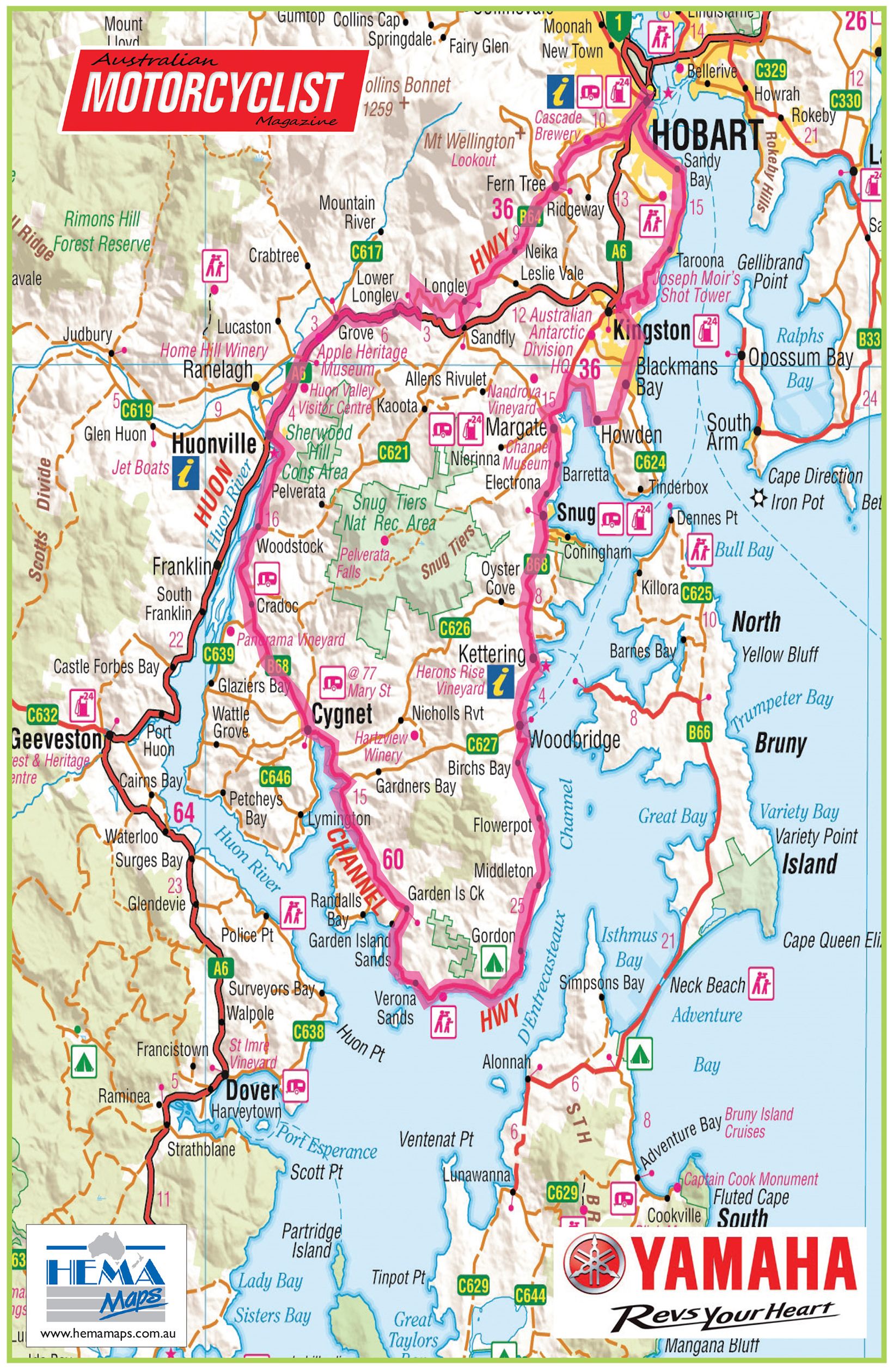 Fuel – Hobart, Huonville (you should only need to fill up once, in Hobart, for just about any bike.)

Head south-east out of Hobart on Sandy Bay Road which soon turns into the Channel Highway. Continue on into Kingston where you need to turn left onto Roslyn Ave and follow it down through Blackmans Bay where the road turns to Brightwater Road. Continue on down and around through Howden all the way back to the T-intersection at Channel Hwy and turn left.

From here you will ride the Channel Hwy all the way down to Charlotte Cove and around to Huonville.

From here, follow Huon road all the way back into Hobart and you’re done.

Dark and Dusty: Do you Dare?