Ridin the Bonang: More Corners than you'll dare to count 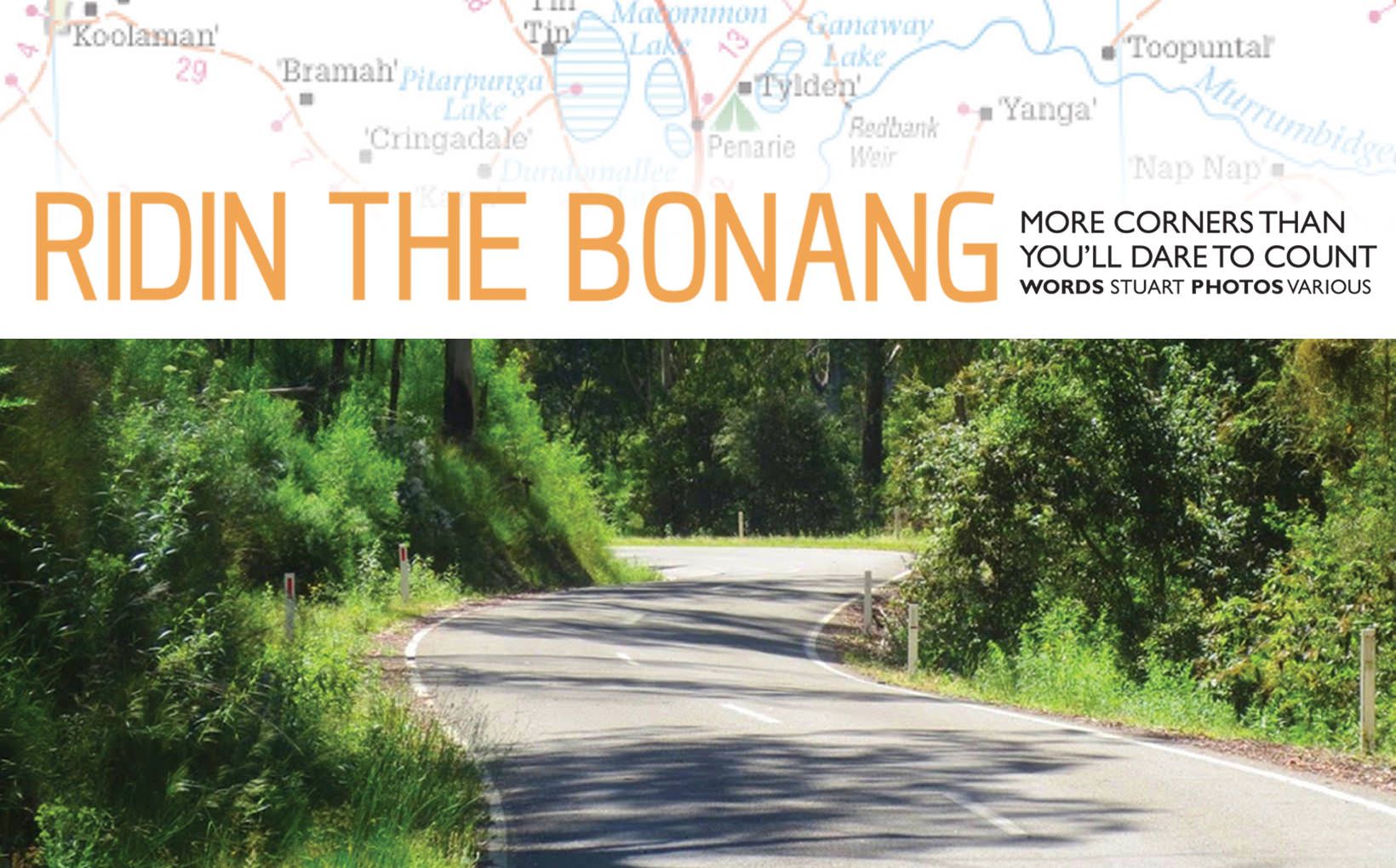 The Bonang Highway is one of those roads from Melbourne to Sydney, or vice versa (yes, you can go the other way!), which is rarely used. Many people avoid it due to the small few kilometres of dirt road, which is actually very well maintained, but it is what seems like the endless number of sweet flowing corners that makes this a must-do ride. Some say it’s the “road of one thousand corners” and others say it’s in the mid three hundreds.

Who really cares, it’s an awesome bit of road to ride.

Orbost is a major centre in East Gippsland, about 375 kilometres east of Melbourne and 235 kilometres south of Canberra (to put you in the general picture of things). It is also about 16 kilometres from the small town of Marlo on the coast of Bass Strait.

The area around Orbost was first settled in 1842 and originally used for cattle grazing. A township began to develop in the 1870s and it eventually became an important service centre for what has developed into a major cattle and agricultural district. The surrounding mountain forests produce hardwood timber, most of which is milled locally.

Good views of Orbost, the Snowy River and the bridges across its flood plain can be enjoyed from Grandview Lookout, located south-west of Orbost in the small community of Newmerella.

The towering peak of Mount Raymond, 16 kilometres east of Orbost on the Princes Highway, provides spectacular views of the region, including as far south as the wetlands adjoining Brodribb River. On a clear day the view extends all the way down to Bass Strait and the Ninety Mile Beach.

The Cabbage Tree Creek Flora Reserve, located south of the highway and to the east of Orbost, includes the Cabbage Tree Palms - Victoria’s only native palms exclusively located in this area. There are picnic facilities and walking tracks through the surrounding forests which are home to a large variety of birdlife.

It’s a shop, Jim, just as we know it. On the western side of the road, it is not especially noticeable except for the big mural on its northern wall.

It’s a pub, Jim, but not as we know it. It is in fact a fi shing resort but it has a few facilities including cold beer, as you would expect in a fi sherman’s hangout. Down off the road on the eastern side near the border.

Small but perfectly formed, Delegate has a well-used pub that’s always been motorcycle friendly. We can’t guarantee that there’s anything else there – this was one of the original towns that protested about losing its bank agency – but last time we checked there was a servo, or what looked suspiciously like one. No guarantees.

Bombala is a picturesque town that is known for its fi ne wool, beef cattle, timber and lavender production. Fly fishing for trout is very popular, as is bushwalking and spotting resident platypus in local streams (if you’ve got the time to look around). It definitely does have fuel.

There are several great walks that traverse the area. Both the Swamp Walk around Nunnock Swamp and the Heritage Walk are nice.

The beautifully restored Early Settlers Hut, which dates back to the 1840s, offers a fascinating glimpse back into the early colonial life of the area. The Bombala Historic Railway, which houses a small museum, or the Bombala Historic Engines Shed which has a good selection of restored vintage era engines and equipment is also worth checking out. 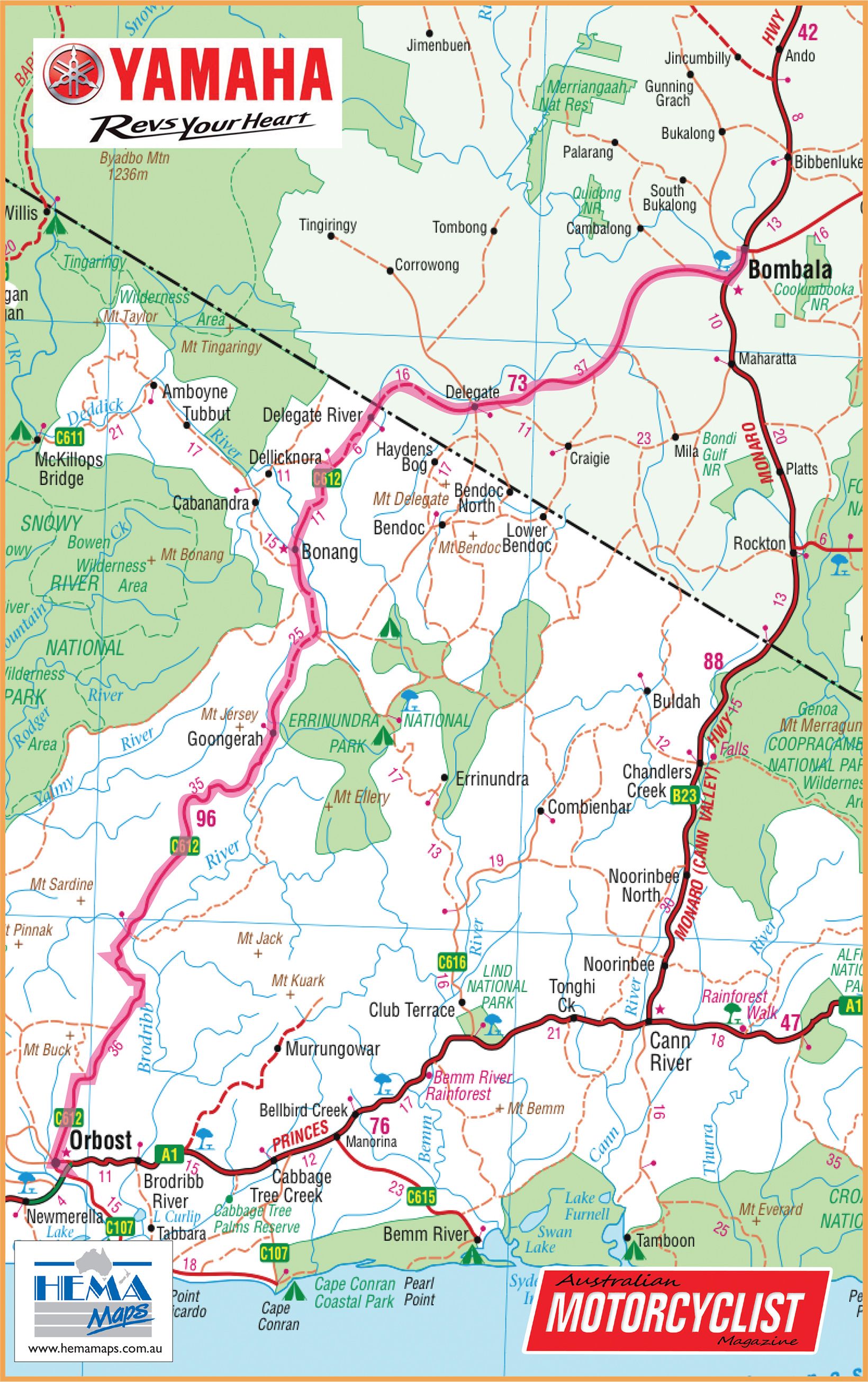 For this ride you can either start at Orbost on the Victorian side, or Bombala on the New South Wales side. I started at Orbost coming from Melbourne back to Sydney.

It’s virtually impossible to get lost on this ride as you stay on Bonang road the entire way until you reach Bombala, but to give you as much details as possible – from Nicholson street in the main part of Orbost turn right onto Bonang road and head north out past the golf course to Sardine Creek, and enjoy the corners all the way to the NSW border where the name of the road changes to Delegate road and starts to veer east and into Bombala. There are only two noticeable turnoffs, both on the western side of the road and both leading to the Snowy River. Effectively there’s no way of getting misled along this route. Enjoy!

Fuel – Orbost and Bombala – nothing in between.

Alice to the Top! Up the Guts: Part Two