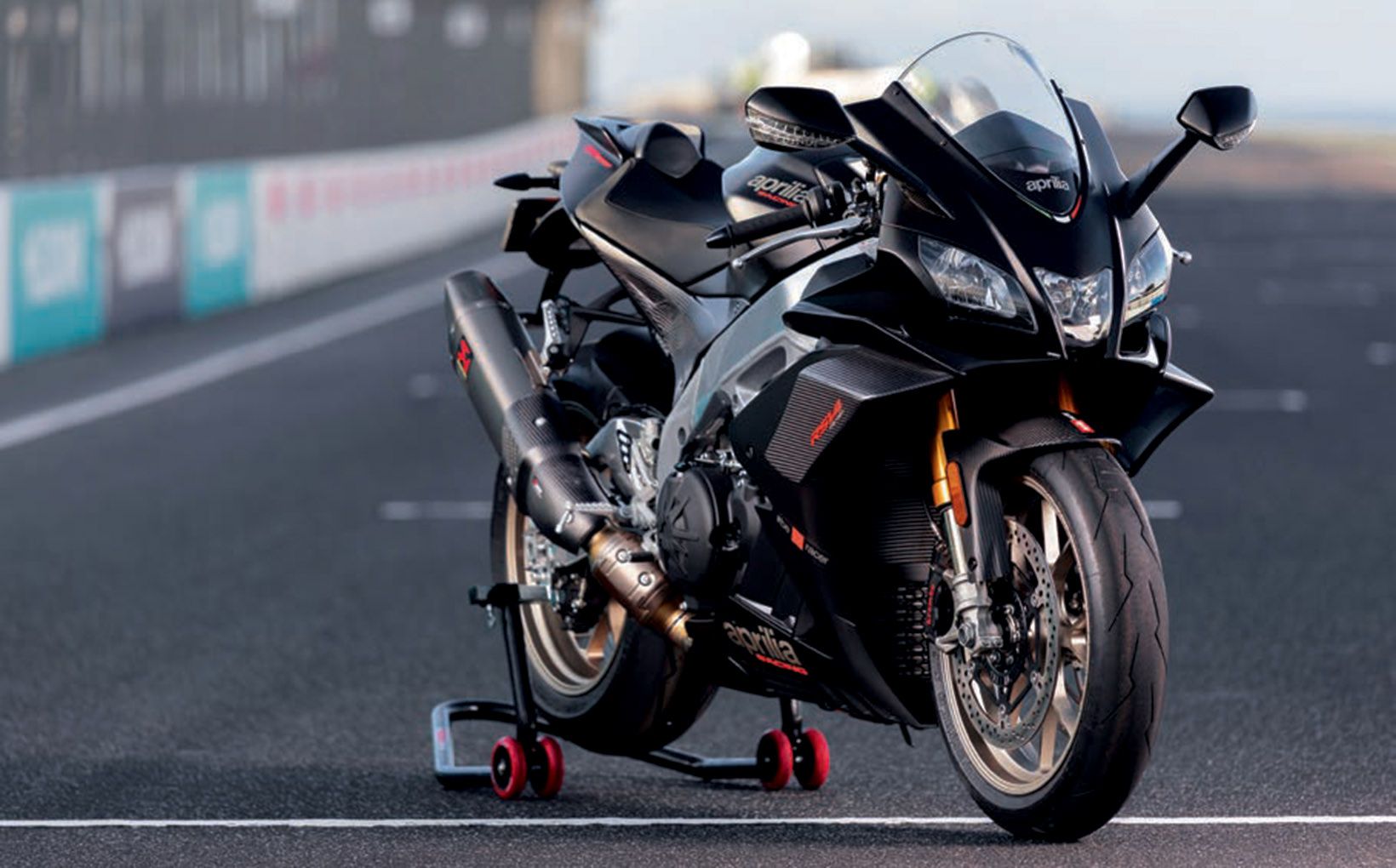 The “Factory” moniker has always been reserved for Aprilia’s halo bikes. The formula has always been increased performance, presence and exclusivity using premium parts.

The price of the parts bought individually was always more than premium asked for the bike, so if you're after that level of performance, it offers good value, but you'll still need to justify the $33,990 to yourself at least.

That would buy a Japanese Sportsbike and a lot of tyres, but it's a lot less than some of the MV Agustas and Ducatis.

This year’s bike follows the familiar Aprilia Factory formula and stretches it further. The company has thrown the kitchen sink at it this time, with forged wheels, Öhlins suspension, aerodynamic wings, Arkrapovic Titanium exhaust, Brembo Stylema Calipers, lots of carbon-fibre and… its own dedicated 217hp (161.8kW) engine. The 217hp claim is the highest in the Superbike class. It’s also a completely different engine to the one used in the Tuono. 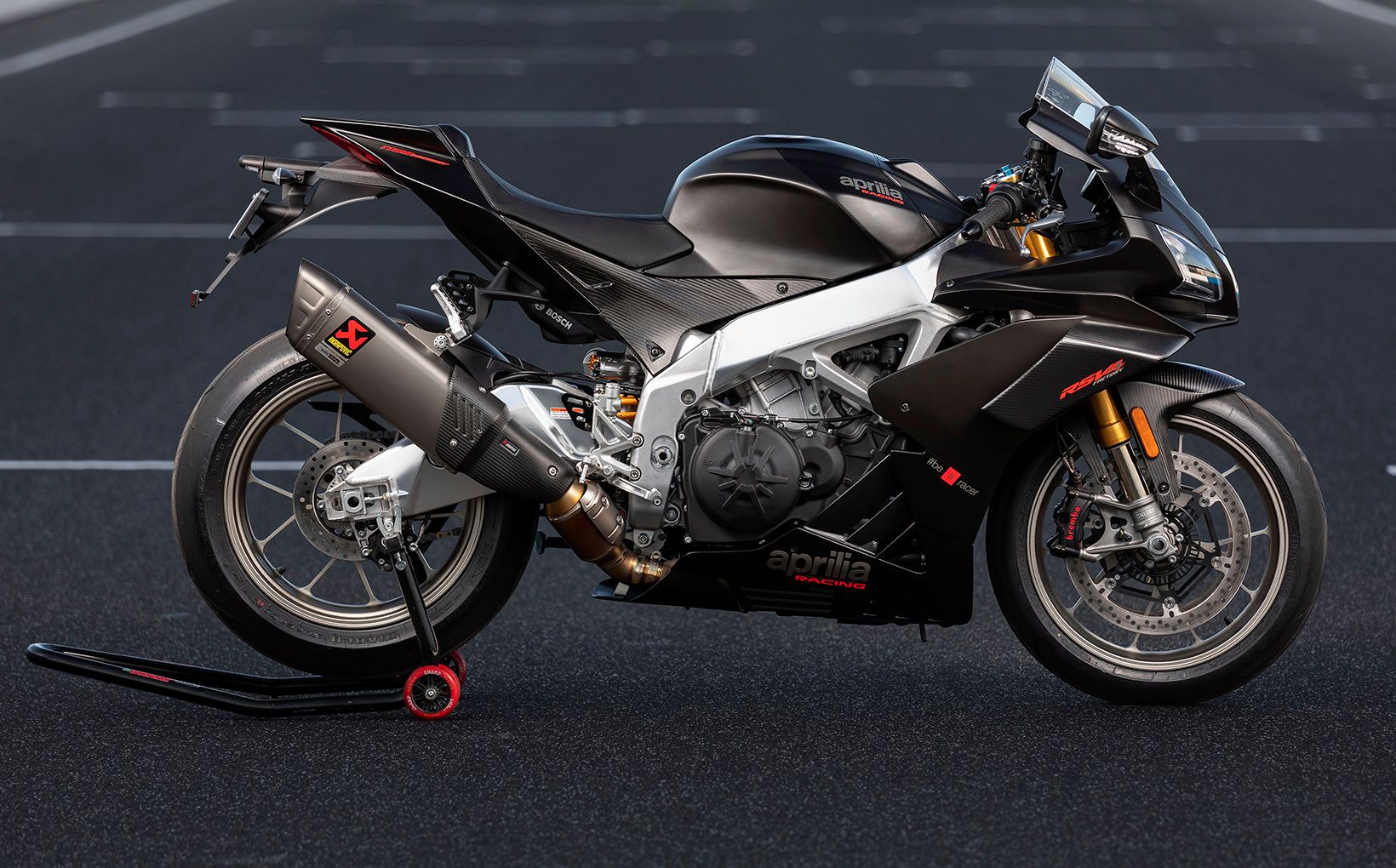 Both MY19 RR and Factory models get Aprilia’s fourth generation APRC electronics package, with improved traction control, wheelie control, quick shift up/down, cornering ABS and cruise control. There’s also Launch Control and a Pit Lane Limiter – if you need that sort of thing. Perhaps the Pit Lane speed limiter might be handy in school zones; and with 217hp on tap… launch control is superfluous at traffic lights. 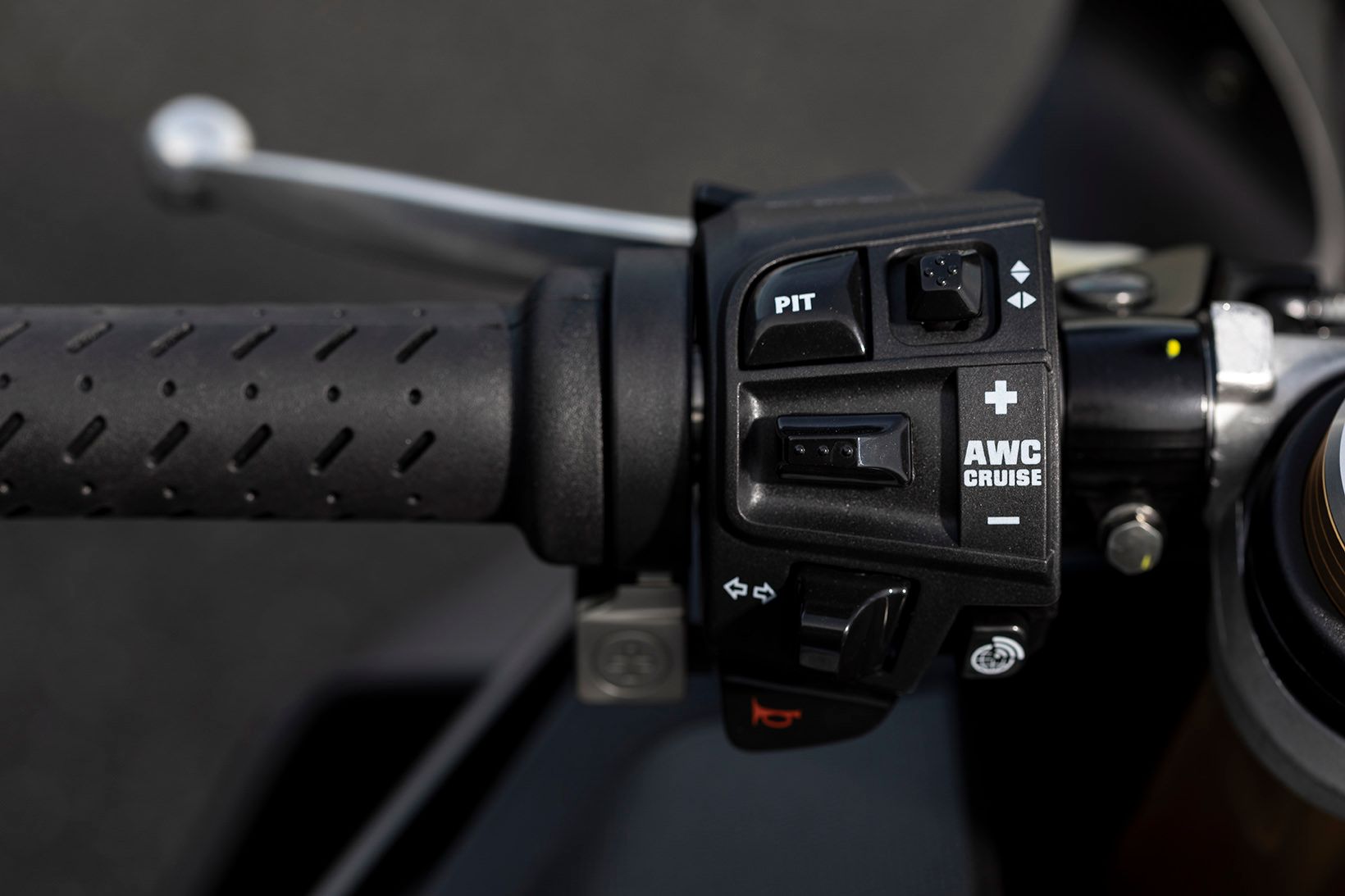 A big point of difference with the Aprilia RSV4 range is its adjustable chassis. Steering head angle, engine position and swing arm position are all adjustable. For riders wanting MotoGP–like level of chassis set up, an Aprilia RSV4 is the only production bike option. Changing these things is a bit of work by the way, but at least you can. 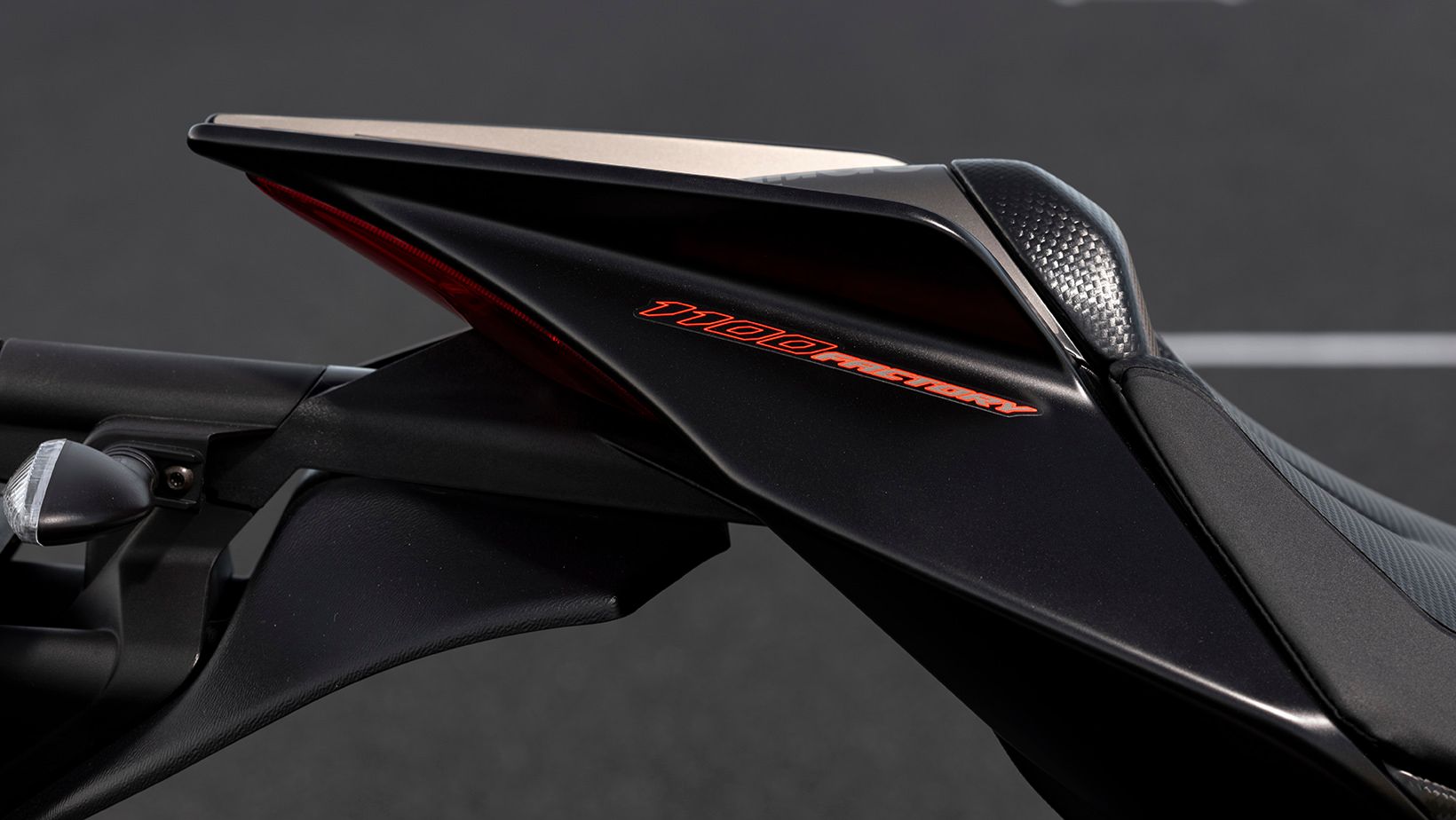 The Factory is distinguished with its own unique paint scheme. It is dark and understated, almost dull. To my eye, it looks good; classy. I also think Aprilia had to go for a dark scheme to play down the visual bulk of the winglets. In a light colour it might look a bit like Dumbo the elephant. 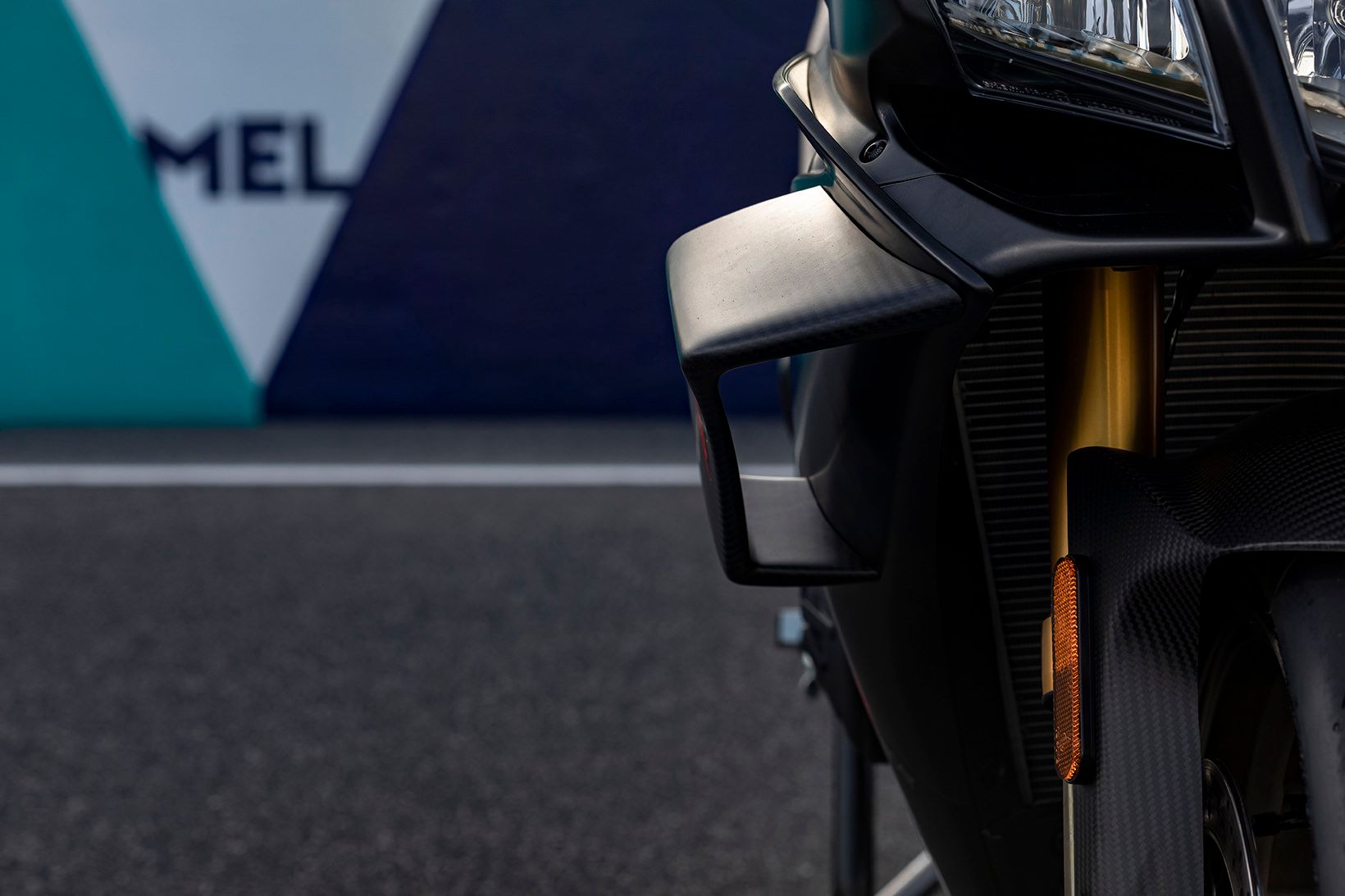 Our time with the bike was limited to track use only at Sydney Motorsport Park. That’s ok, as it’s a purpose-built track bike. You can put a numberplate on it, but you may consider not doing that if you’re regular track rider; and use it as a dedicated track machine only. You’ll avoid a couple of thousand dollars of government charges. It’s pretty much the same story as every other 1000cc Supersport bike. 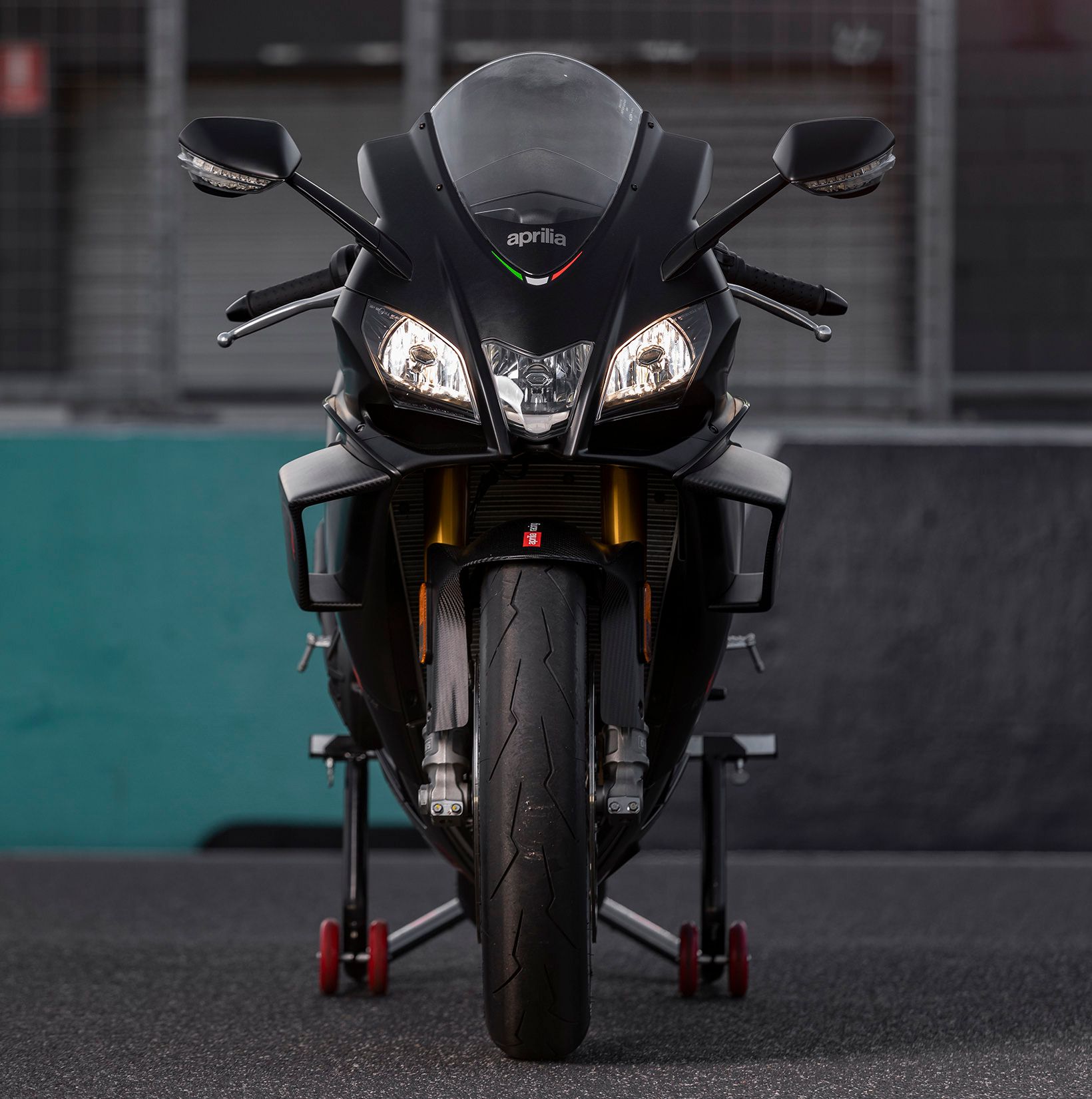 Getting on the bike it feels like a race bike; small, high pegs… It works for me, but I’m 170cm short. Other testers were closer to average, and I think the high pegs were less than ideal for them. Fortunately, this is something you can consider before handing over the purchase price by sitting on the bike in the showroom. It would be nice if the pegs were adjustable with a low setting for street use.

Aprilia technicians had adjusted the bike to the owner’s manual recommended track settings, plus an extra click tighter all round. It worked well. On track the first thing I noticed was how easy it is to place the bike where you want it.

It followed my chosen line exactly. This speaks to a very high level of steering geometry stability during hard braking and acceleration. The bike doesn’t have electronic suspension like the Tuono, but it didn’t feel at all deficient because of it. 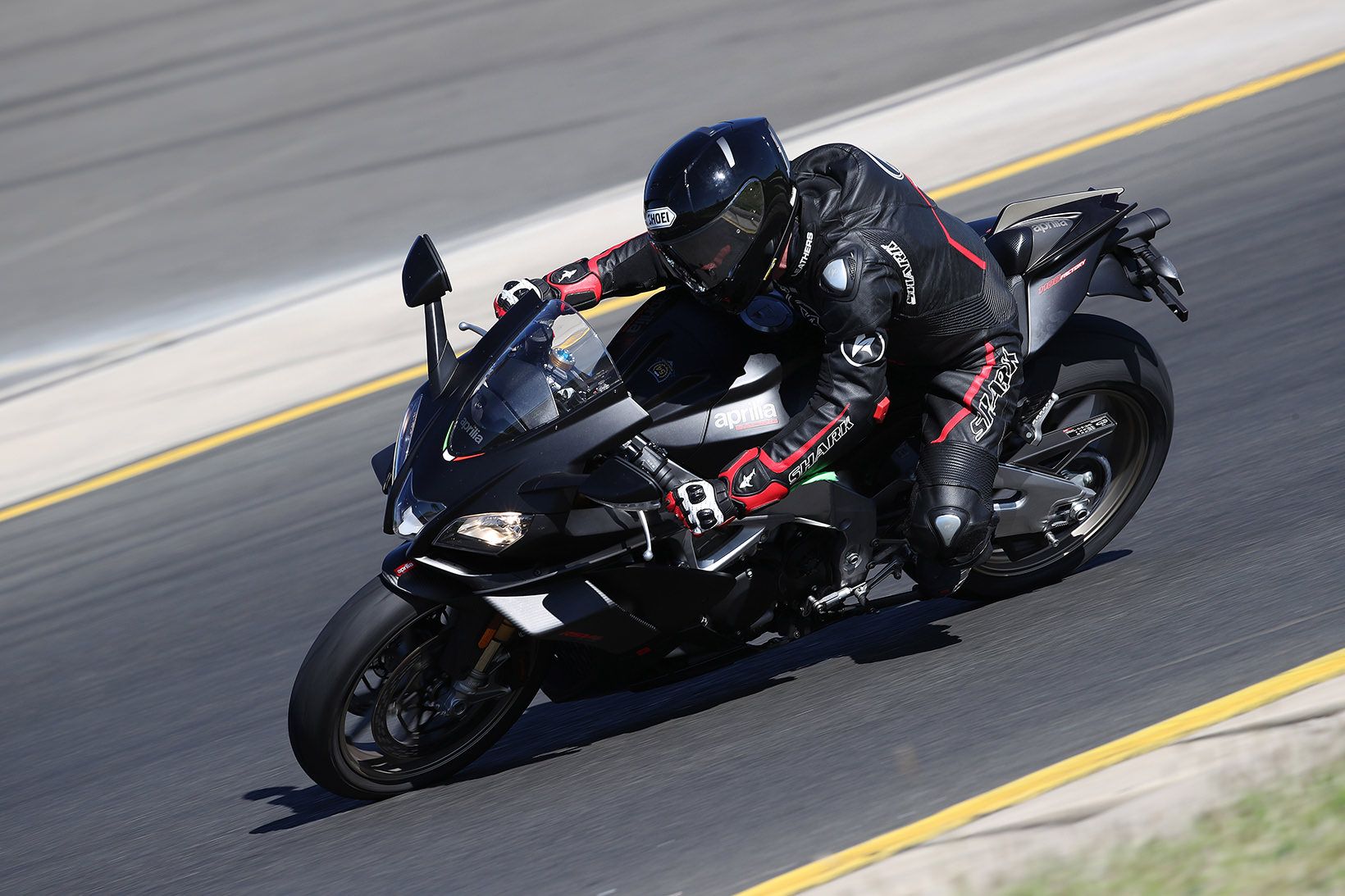 The Quick Shift up and down is worth noting as well. At track engine speeds it worked beautifully. Sometimes at lower street revs quickshifters can be a bit clunky, and this may, or may not be the case with the Aprilia, I didn’t test it in that environment. However, when you’re serious it is as good as I’ve used.

The RSV Factory is amazingly forgiving when you get it wrong. In the past ultra high-powered bikes rewarded errors with sights of earth… sky… earth… sky… sights trackside observers describe as highsides.

As an example, in one session the front lifted off coming out of a corner as I accelerated to pass some slower riders, which is often a recipe for an arm-breaking tank slapper, followed by… earth, sky…etc. However, there was only gentle a waggle from the front, and I carried on, gapping the slower riders far more than my modest talent should have allowed. Impressive, but 217HP with a 62kg rider is going to equal excitement. A lot of excitement. What’s surprising is how accessible that excitement is. The bike just hooks up and drives down the track, the front wheel may hover above ground depending the wheelie control setting. Aleix Espargaro fantasies anybody? 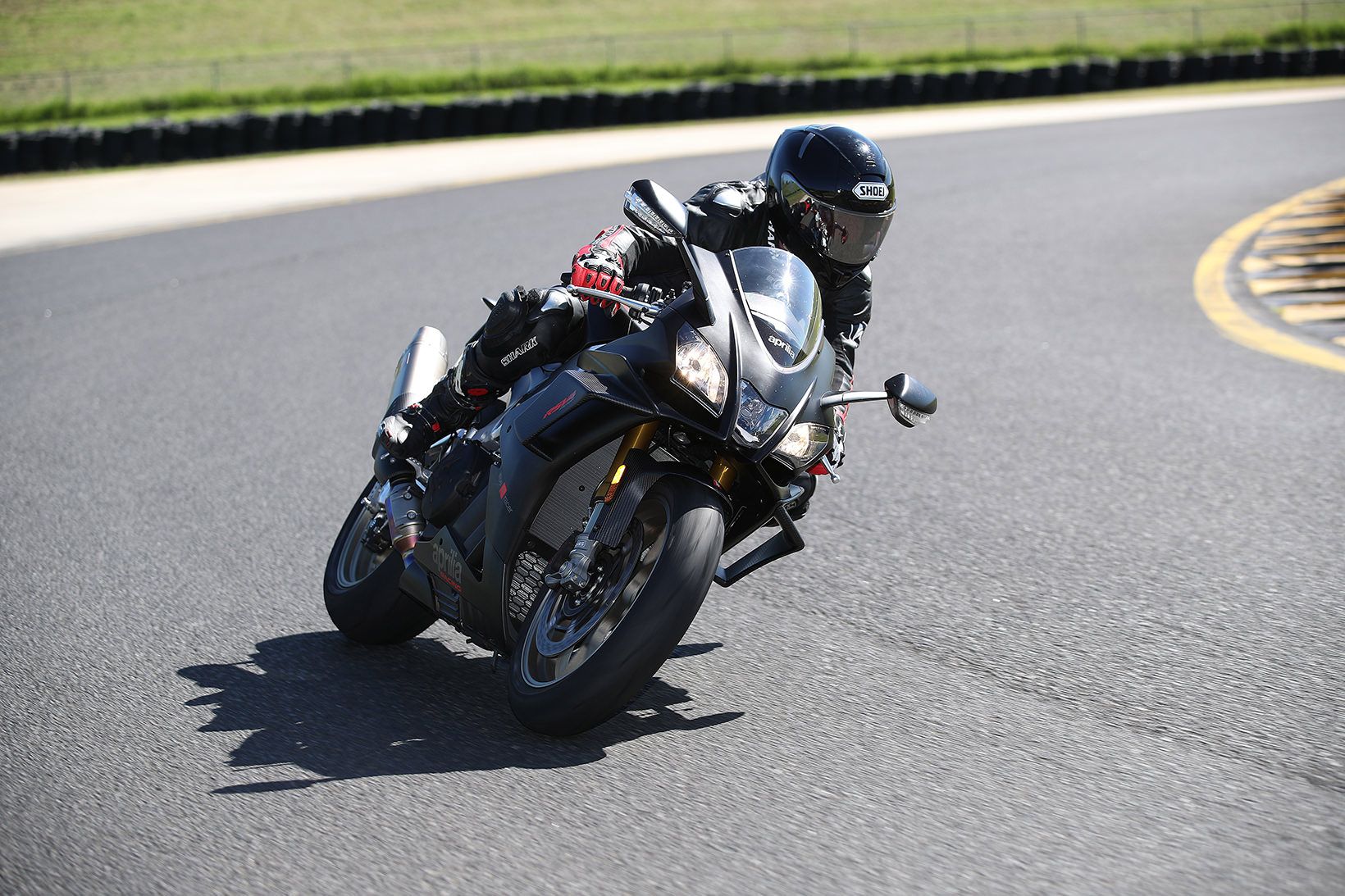 As is always the case, it’s not a perfect machine (and I’m being pedantic here), there are a couple of things which I think could be improved. The many electronic settings are driven by a miniature joy stick on the left switch block. The logic of how this is done is easily learned; but it’s necessarily tiny, and therefore fiddly to operate. Not a deal breaker, but it will annoy you from time to time.

When you first start this bike, you’ll notice something else that is suboptimal. It’s a fire breathing monster, but at idle it sounds like a Vespa. The exhaust flap being the culprit. Once engine revs rise the noise is MotoGP, and a wonderful thing; but I sense at urban speed limits, it’s going to be mostly Vespa; MotoGP not so much. Perhaps they could emulate the HSV V8 Commodore with its Bi-modal exhaust. The HSV exhaust flap is open at idle giving a nice burble, it closes at street speeds, and opens again at higher RPM.

I spoke with Aprilia Australia’s technical manager about quality, and without boring readers poo-less, I can say I was impressed. They back this up by offering full factory warranty for track work. Aprilia do require shorter service intervals (50%) to maintain that warranty. Oh, and the ECU knows when the bike has been on track. 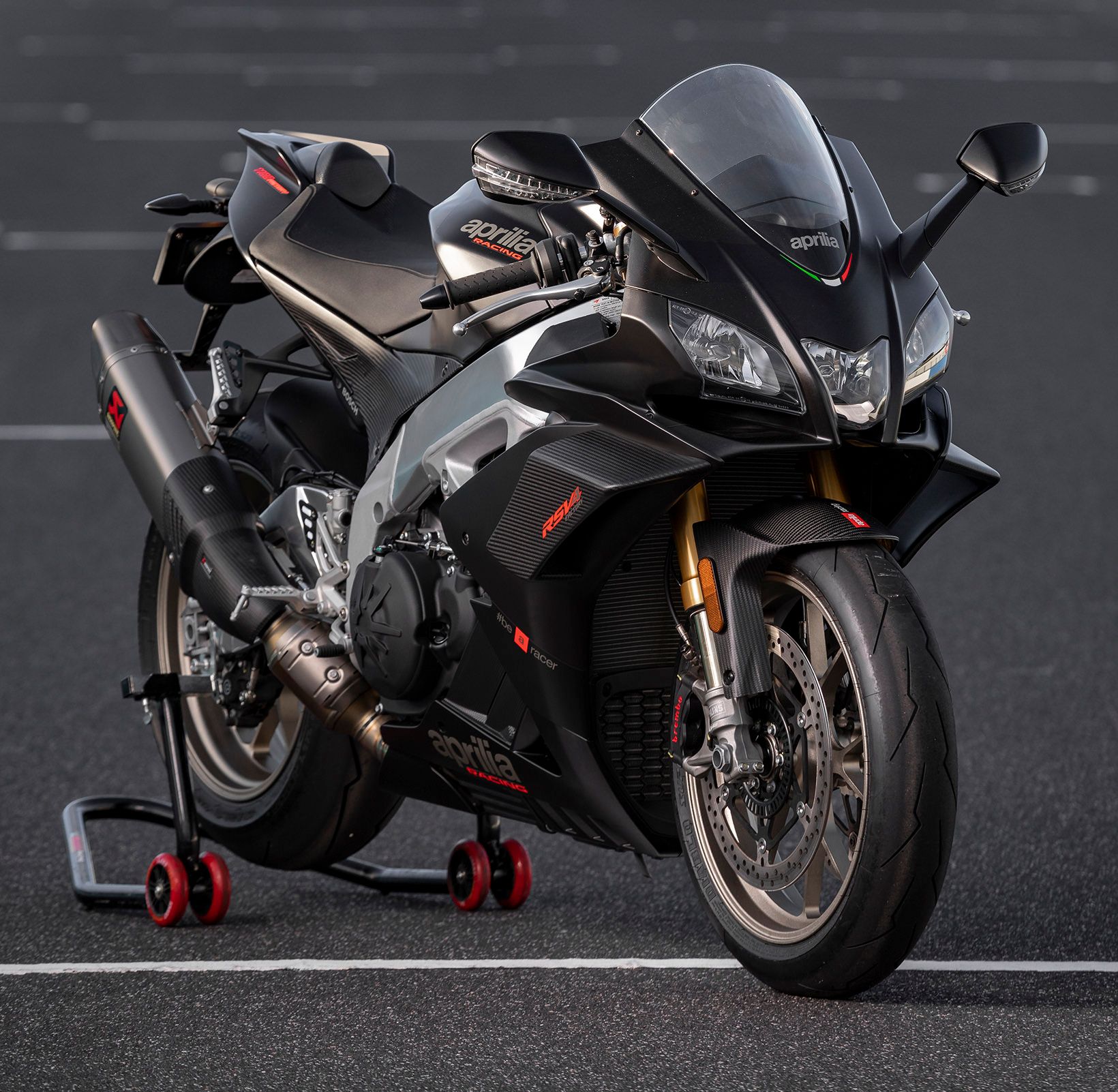 Regarding warranty, it is two years, unlimited kilometres and that’s OK, but as an expensive, premium bike, I think it’s time for the Aprilia to go three years. I’m sure the bikes would go the distance. Longer warranty would sell more bikes; dealers would get more service work, and owners would get more resale. Why wouldn’t you?

The Aprilia RSV4 Factory is a superb bit of engineering, but where does it fit into Australian motorcycledom? Well, you’d either be a Superbike racer, a road rider who can’t resist the magnificent folly of a 200plus horsepower sports bike; and/ or... a track day junkie.  As a café conveyance it certainly has its charms; as something you can use on public roads, not so much.  Even with your crazy dial set to maximum, you ain’t going to use more than a fraction of RSV Factory’s capability on a public road. It is first and foremost, a formidable track tool.