Across the Top of Tas - St Helens to Launceston 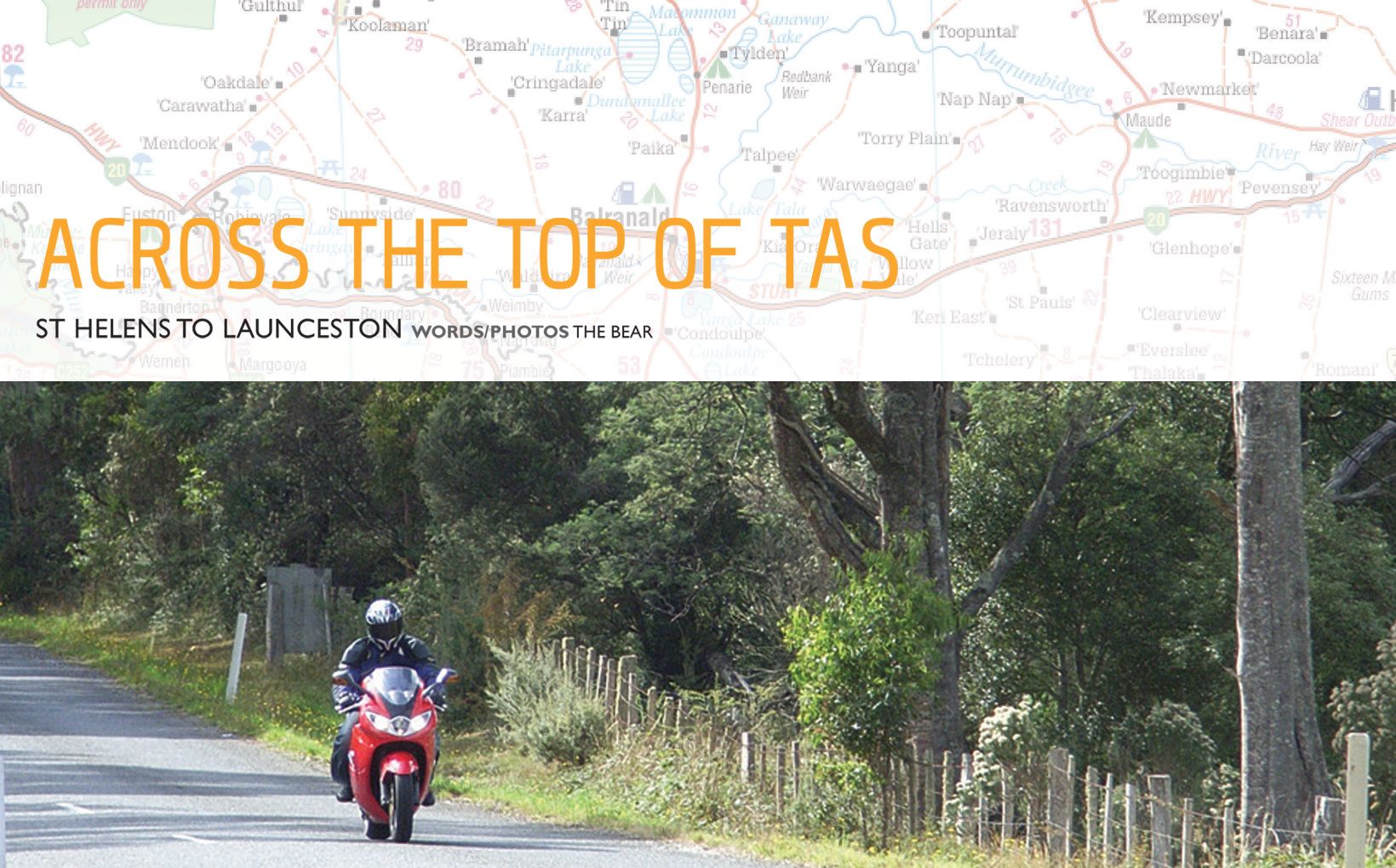 In my mind, St Helens will always be associated with crayfi sh. Freshly caught, these tasty crustaceans form an important ingredient for the local restaurants. However, Bicheno, further south, and St Helens are the only places where I’ve ever seen (and eaten) crayfi sh as a takeaway meal, wrapped in newspaper and eaten with a wooden fork. Sadly, the last time I was there the place where you could buy it was gone – maybe it was just out of season. The beaches are beautiful, and the mild climate means that this is a place where camping is almost always a pleasure. All services are available, and you might as well fuel up here.

A short detour north from St Helens takes you to this small but almost staggeringly picturesque village. A combination of pristine bush, lichencovered granite boulders and white sandy beaches defi nitely gives Mother Nature a good name here. The village, really a collection of what seems to be more or less just holiday houses from the foreshore (there’s more of it inland), intrudes relatively little. Let’s hope it stays that way. I could image de rich folks deciding that Binalong Bay would make an uncrowded Byron Bay, and moving in. Don’ read dis, rich folks! Oh, apparently Binalong hosts the Great Abalone Bakeoff every February – I’ve never been there for it, but doesn’t it sound good.

Off the highway a short distance to the north, this is a small timber settlement that had its heyday when tin was mined around here. It’s been called “a fi ne, unadulterated example of early Tasmania” and might be worth a look. There are no services.

Also just off the road, Pyengana doesn’t have a pub. It is a pub. Commonly referred to as The Pub In The Paddock, which is precisely what it is, it’s a small, pretty standard Tasmanian country pub with variable opening hours. In my experience it is rather quiet, but I suspect that tourist buses now stop there. If you get invaded, ride on to St Columbas Falls, a waterfall pleasantly set in the bush. And don’t forget the Pyengana Café at the dairy farm. Great atmosphere, food and coffee!

Once the Weldborough Hotel was known officially as The Worst Little Pub On The Coast (no, it’s nowhere near the coast). It was a rather rundown, whimsical sort of place with obscene cartoons plastered on the wall of the bar and a steady flow of motorcyclists through its basic but beautifully located campground. These days it is a stop on the Tasmanian Brew and Cider Trail, known as Historic Hotel Weldborough and very flash indeed. It was closed when I passed through fairly recently (well, okay, it was 8.00 o’clock in the morning) so I can’t vouch for it myself but by all reports it is worth a stop – and you can drink your way all around Tasmania with the comprehensive range of beers and ciders*.

One of Tasmania’s most agreeable towns, Scottsdale allegedly also has the best soils in the entire island. One crop that takes full advantage of that is lavender. There are a couple of excellent if not exactly cheap café/restaurants in town, and all services are available. It’s worth taking a look at the Forest Eco Centre, I’m told, which is all about sustainable forestry. There is no point in going to Jetsonville, a few kilometres to the north, and asking for George. He doesn’t live there, and neither does his boy Elroy.

Despite a bit of a messy one-way system, Launceston makes a good stop. It offers lots of 19th Century buildings, extensive parks and gardens and the terrific National Automobile Museum which, despite its name, has some interesting motorcycles on display. And of course there is the Boag’s Brewery, owned these days by the Japanese. Tours can be booked online and are good fun, even if they do cost $33 per person. Gulp. The Queen Victoria Museum and Art Gallery has some really good exhibits on Aboriginal history. If you’ve ever wondered what all the fuss is about Huon pine, take a look in the Design Centre of Tasmania. *I am not going to insult you by carrying on about not riding after drinking. I presume you’re an adult. 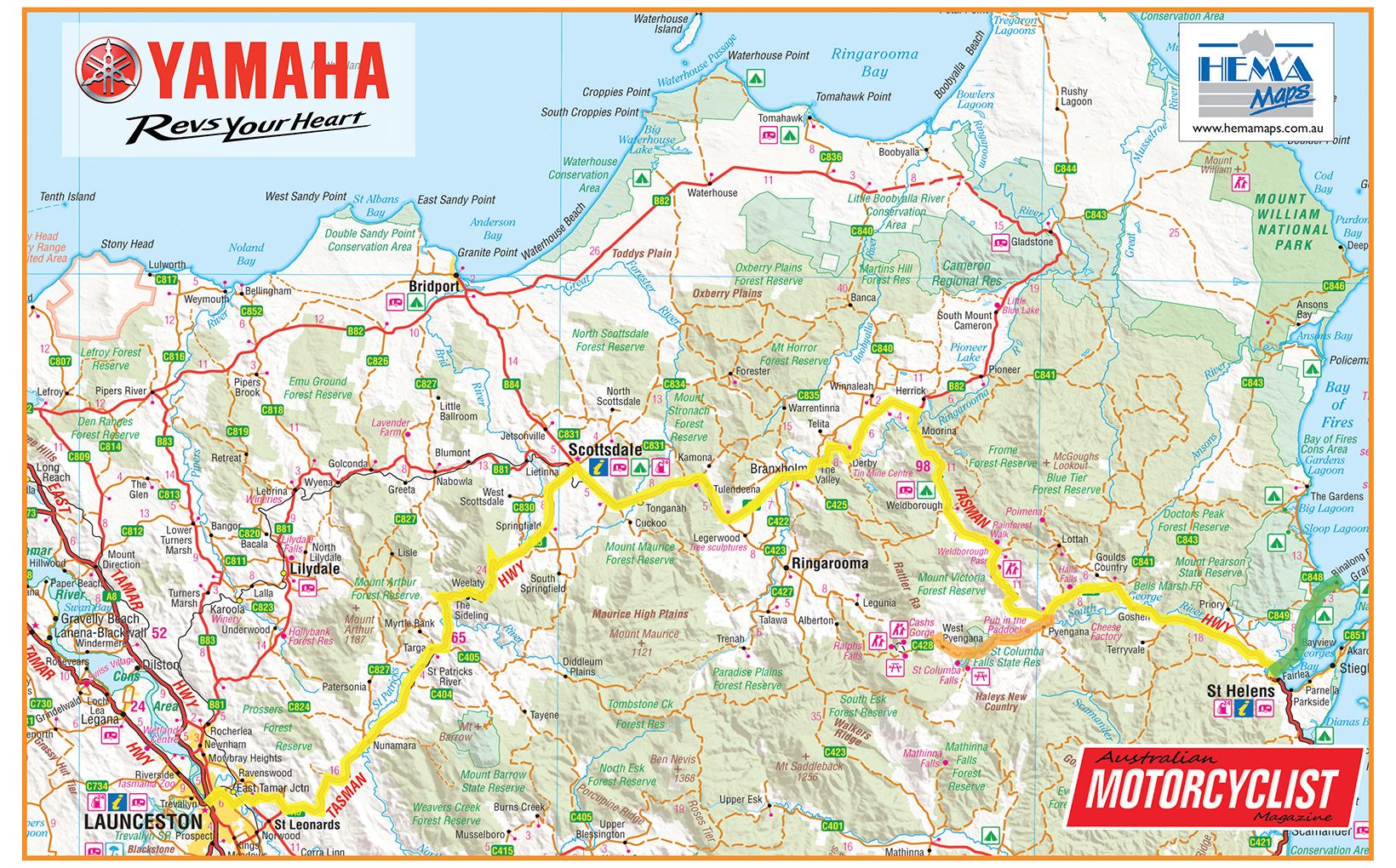 ACROSS THE TOP OF TAS - ST HELENS TO LAUNCESTON

I recently had it pointed out to me in a forceful fashion by one of our Tasmanian (I’ve given up on “Taswegian”, everyone thinks I’m being precious) readers that we seem to be undervaluing our own South Island and promoting another South Island far too much. I’m not sure that I agree that New Zealand’s South island can be over-promoted, but I do understand her disappointment. We have definitely been guilty of ignoring much of Tasmania, and we’ll try to set that right in the coming months. So to start with, here is a short ride through some of the most beautiful country on this green Earth, also taking in one of Tasmania’s best bike roads: the A3 or Tasman Highway.

Leading north-west out of St Helens, the Tasman Highway passes through lush paddocks (yes, really – ask the cows) and dense patches of forest on its way over the various tiers and ridges to Tasmania’s second-largest city, Launceston (that’s “loncesten” to you). There are no mountains as such along the road, but plenty of those tiers and so on make for an excellent, twisty road. The road surface is generally good, but you will find some wavy bits where log trucks, I presume, have pushed the top layer around. The run to Pyengana is pretty but not especially challenging. After that it gets a bit more interesting with some tighter corners. I seem to recall removing substantial amounts of steel from the Harley I was riding the first time I traversed this road; other bikes have found it easier. Stop at the lookout at Weldborough Pass and, well, look out; there is a lot of wild-looking forest out there. Actually, much of it is regrowth; there was a lot of tin mining around here as well as logging which continues to this day. After the obligatory stop at the Weldborough pub there is another twisty ride to Branxholm, which is a tiny spot without any services. You will see many tracks and even roads off to both sides of the A3 along here. Be careful if you decide to go exploring; the bush is riddled with unmarked mine shafts and if the locals can be believed, you wouldn’t be the first rider to disappear into their maws. Take that with a pinch of salt, but be wary nonetheless. The road flattens out after Branxholm, and passes fields of hops as it approaches Scottsdale. There is fuel here, and although it’s only another 65km to Launceston it won’t hurt you to drop a few dollars into the local tills and fi ll up as well as getting yourself around a coffee. Try the Café on King, street that is. A bit more flat road and then another ridge to cross follows, more flat country along the St Patricks River and then some more hills before you descend into Launceston. And here’s a final suggestion for your visit: take a look at Princes Square. There you’ll see a fountain featuring a… pineapple. This was originally a half-naked nymph, but the good burgers objected and had it replaced. All together now: hmm. Pineapple, eh?

Just a short detour out to the coast from St Helens. Turn right into Quail Street; this becomes Binalong Bay Road and takes you north along the bay shore some 10 kilometres or so to Binalong Bay. You can come back via the Mount Pearson State Reserve track, which is a good alternative ride if you don’t mind some gravel. It meets Ansons Bay Road where you turn left. This in turn takes you back to the Tasman Highway west of town.

This is even shorter, whether you go out to St Columbas Falls or not. But it’s worth it for a look at both the pub and the falls. After Goshen, which is an intersection not a town – what Australian atlases delight in calling a “location”- you pass the Willows roadhouse and then you’ll see the signpost to Pyengana to the left. Can’t miss it.