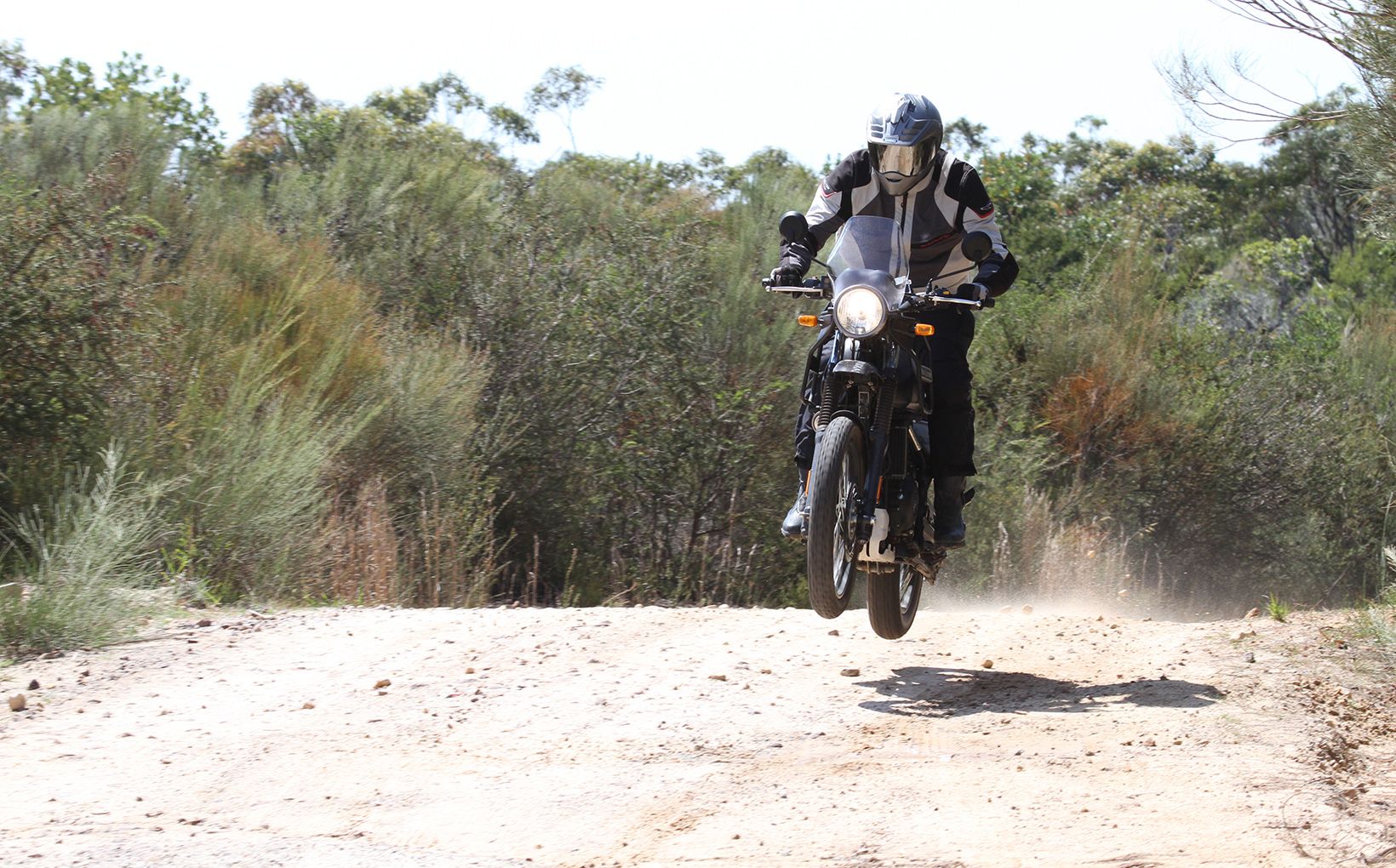 The Royal Enfield Himalayan is one of the most popular RE models. It’s a robust, versatile bike for the daily rider, learner, adventure seeker or enthusiast. The addition of EFI and ABS lift the Himalayan up a level, while it remains low on price. 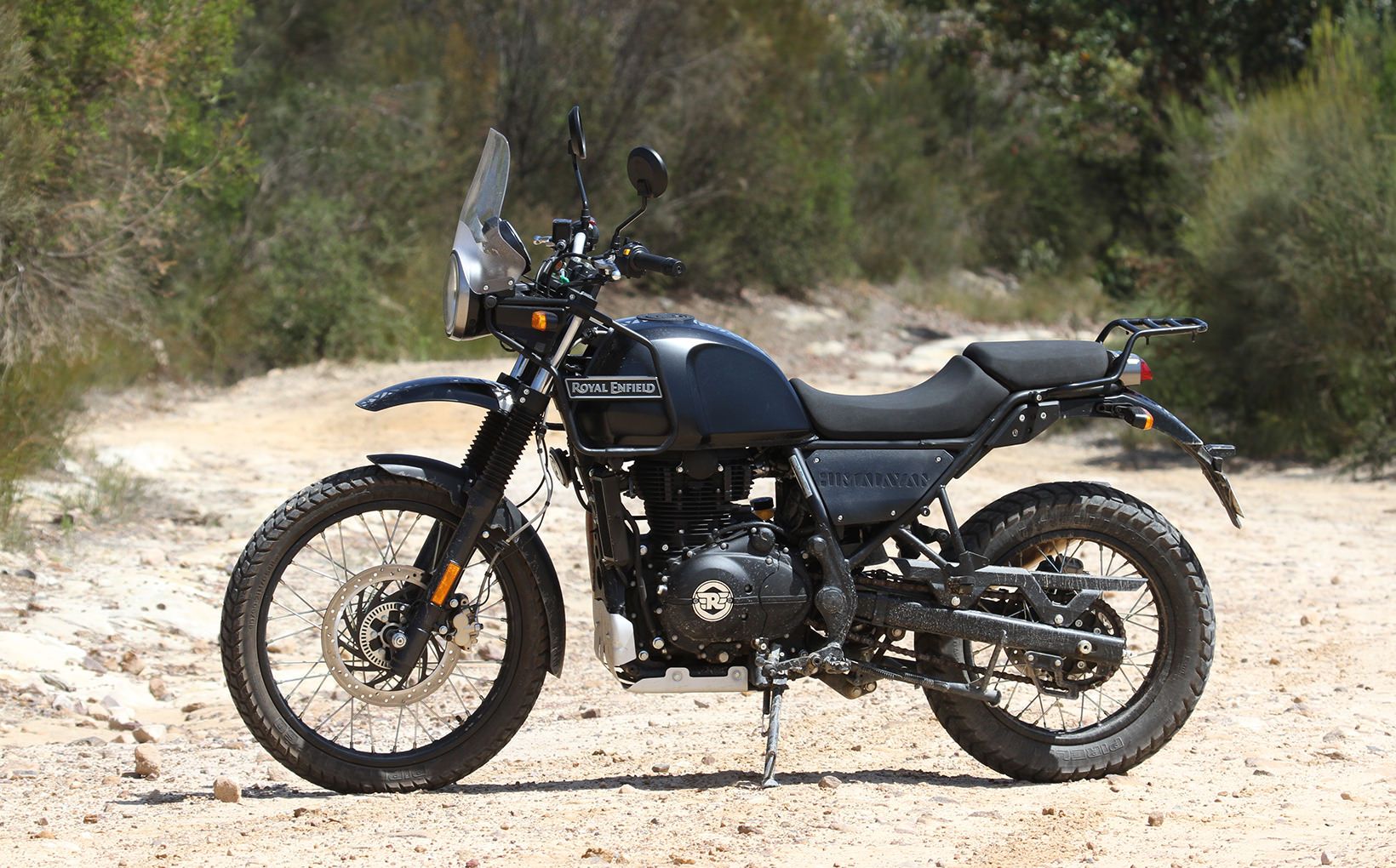 The seat is absolutely rock hard!

I rode this bike for two weeks and was fairly impressed with it. First of all, that long-stroke single is surprisingly torquey and with the long, tall gears, the Himalayan gets along well. It’s also smooth for a single and the gearbox and final drive ratios are well suited to get the maximum out of the motor. 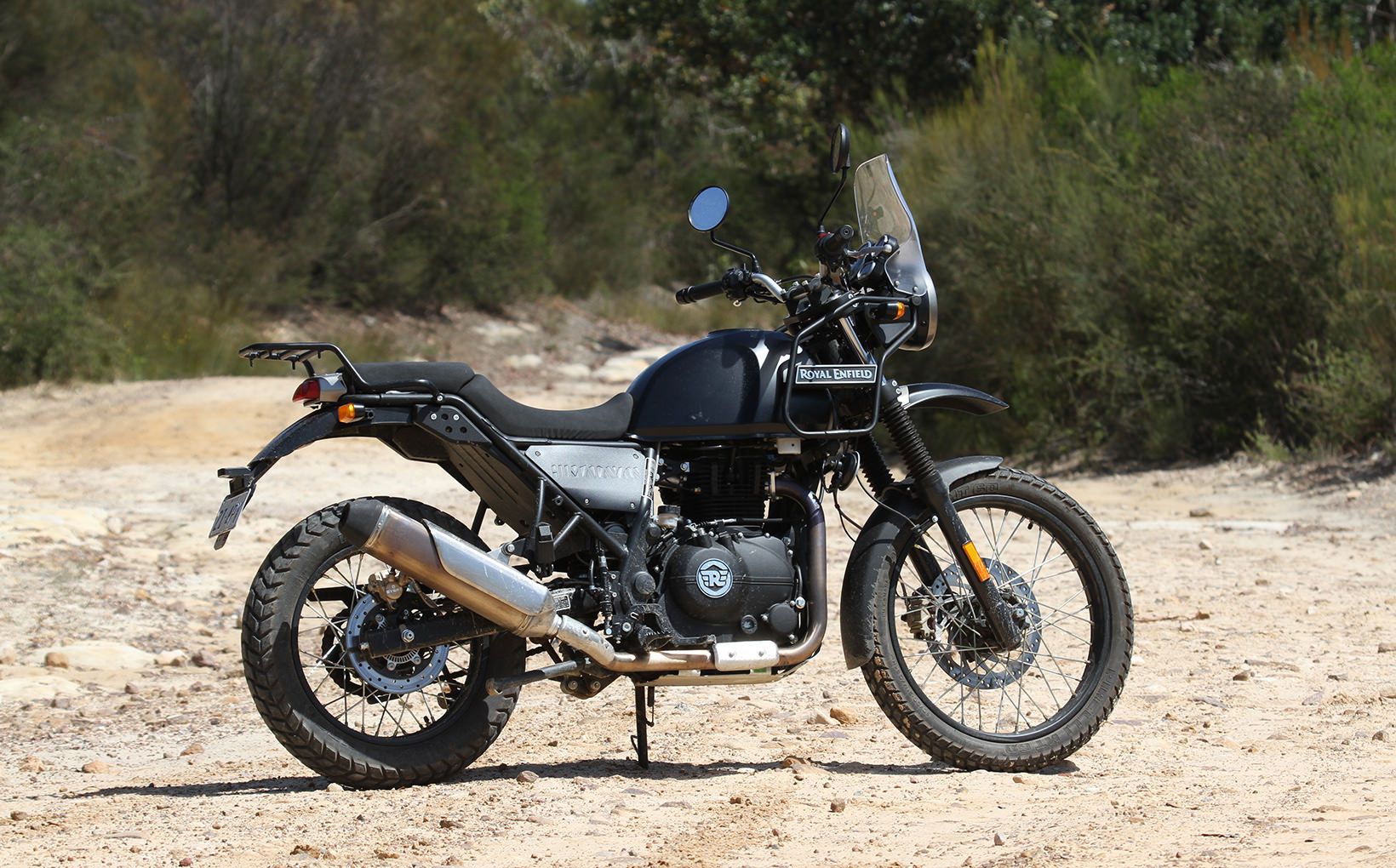 The Himalayan is powered by the Royal Enfield LS 410 engine, which is 411cc and produces just 24hp@6500rpm and 32Nm@4000rpm. It has a five-speed wide-ratio gearbox, is a SOHC oil/air-cooled unit and aside from the EFI, is about as basic as they come for an engine. 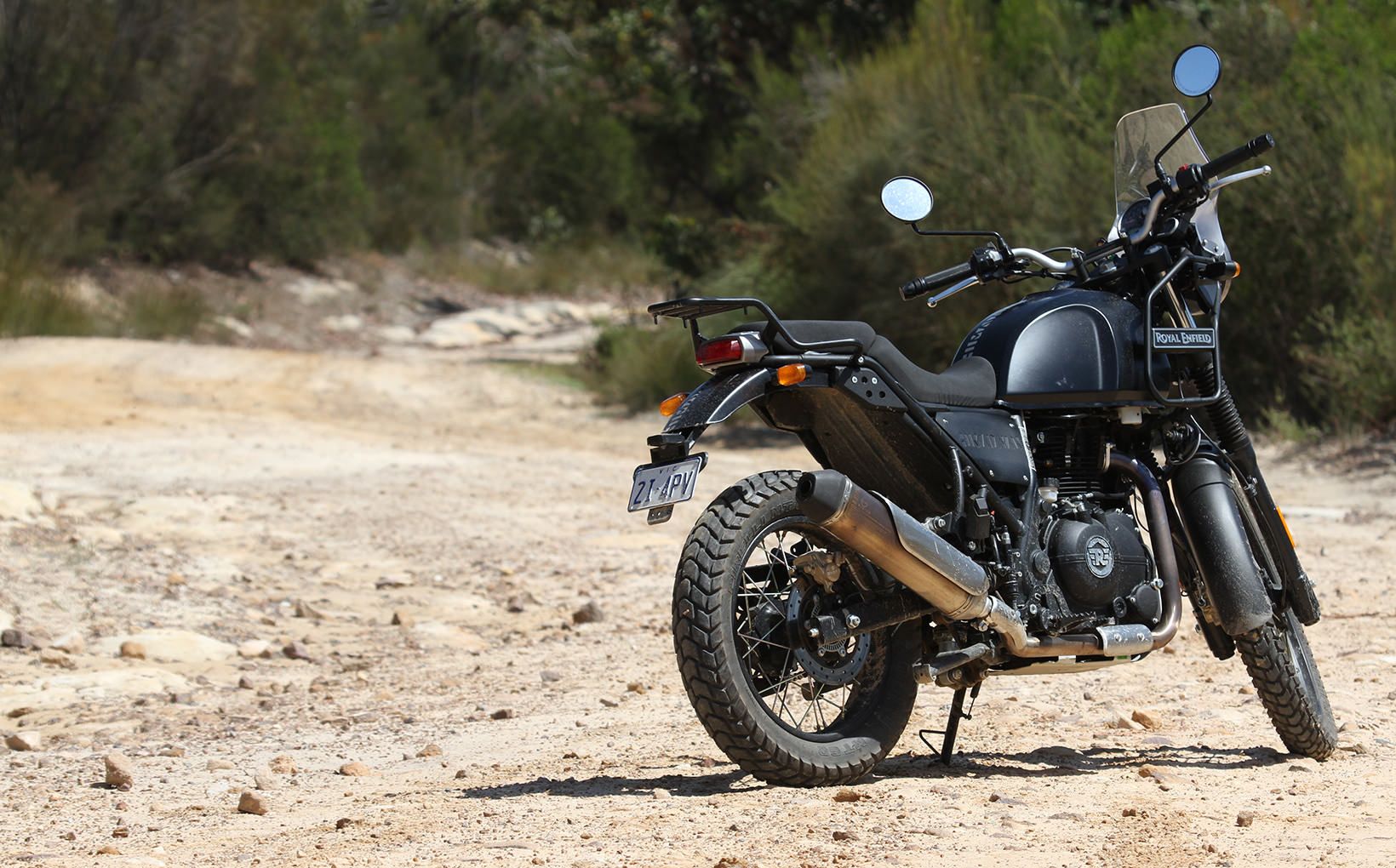 Chassis-wise the Himalayan has a half-duplex split-cradle steel frame running 41mm conventional forks and a linkage type monoshock rear end. The brakes are basic, with a single 300mm rotor at the front with a two-piston ByBre caliper and a 240mm rotor and single-piston caliper at the back. Wheels are 36-spoke steel items, a 21in at the front and a 17in rear, while the tyres are Pirelli MT-60. All-up the bike weighs in at a claimed 191kg ready to roll… 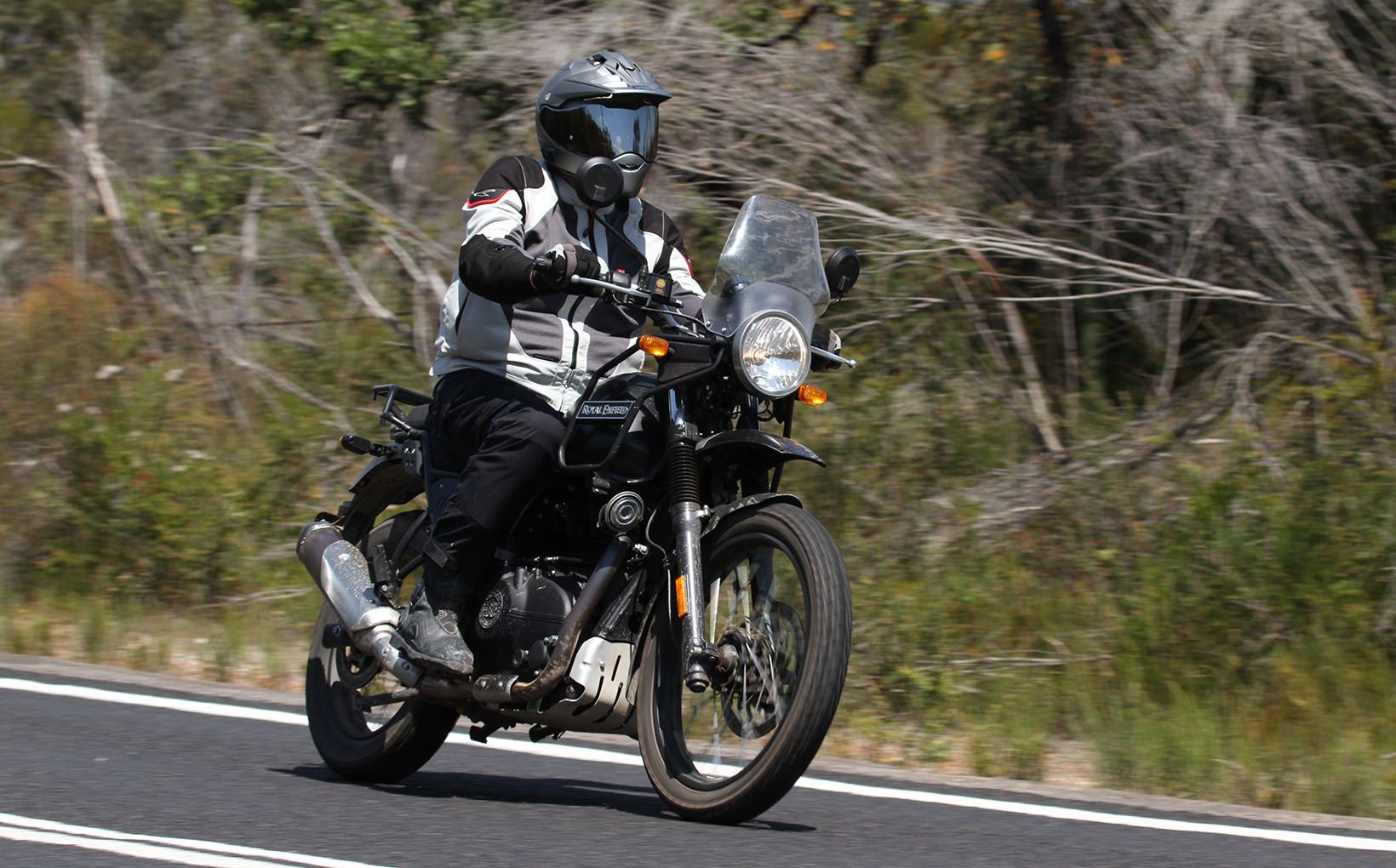 The Himalayan is a cramped ride for me. Sitting on the bike, my knees touch the crash bars and my legs are excessively flexed due to the seat-to-footpeg distance. It’s a tight rider triangle for a taller (187cm) rider. This shocked me somewhat, as the bike is dubbed an ‘Adventure Tourer’ by RE, however, touring for me would be out of the question. We are all different shapes and sizes, however, so what doesn’t work for me might be spot-on for you.

The ‘bars are tall and not too wide, just right. The screen tall enough and the dash well positioned. The controls fall easily to hand… The tank is narrow, as is the seat, which incidentally feels rock hard, while the side covers bulge out and prevent me from sitting on the bike properly as they press against my legs. Standing on the bike, this is further exaggerated. The side covers need to be redesigned to allow a better ride position. 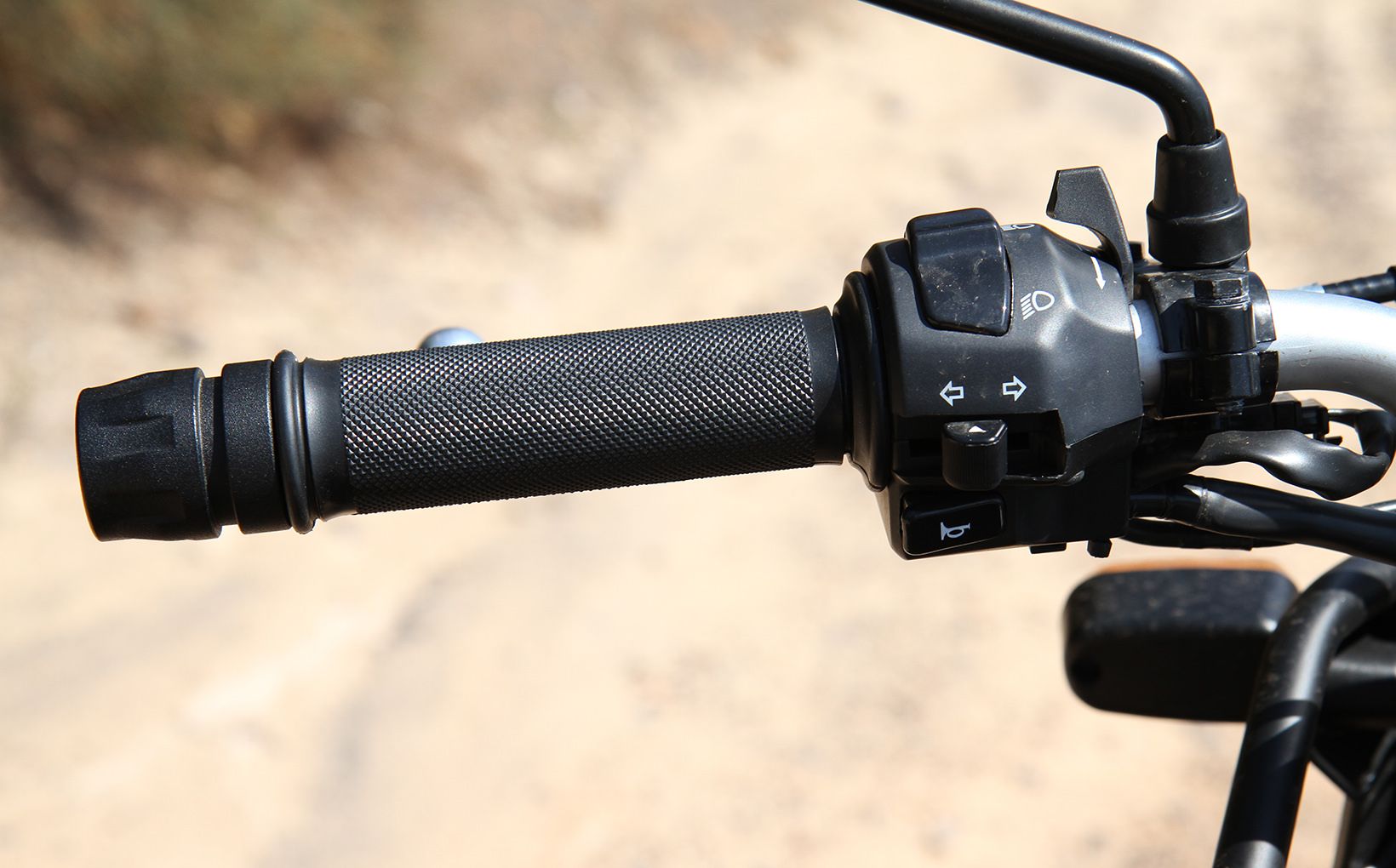 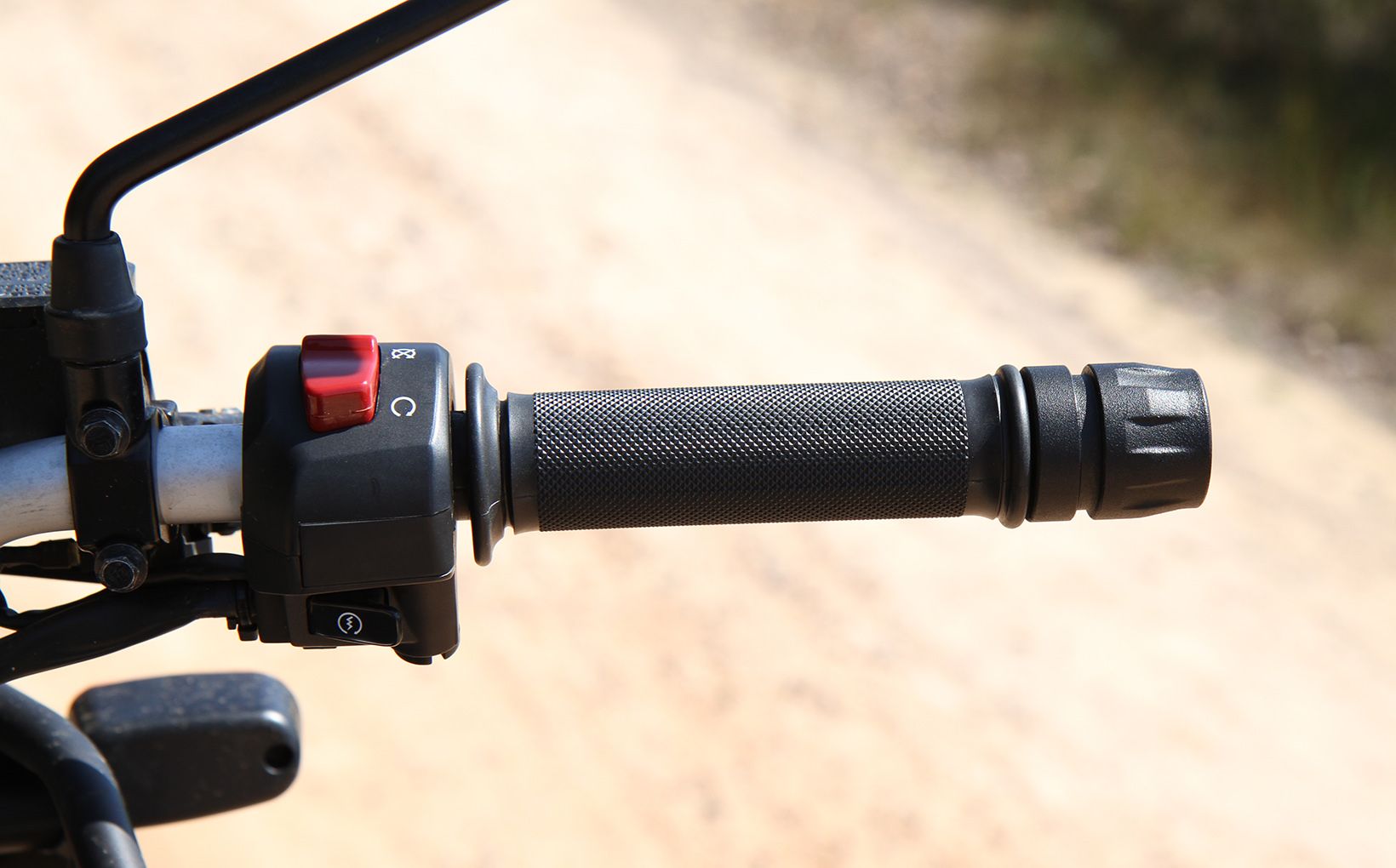 The controls fall easily to hand…

Firing the bike up, I notice it is a little hard to get it going from dead cold, as the carby version was. There is a choke/fast idle lever but this has little effect. I let the bike idle for a good few minutes before it will accept throttle. Once warm, I head off for a day of testing, with some tarmac and off-road planned including highway, country road, single-track and dirt trail and only one fuel stop required!

Heading through town to run some errands and grab a coffee, I soon realise just how nice this 410 motor is. It’s punching well above on-paper spec, with a nice broad spread of torque and an engaging nature, particularly between 4000 and 5000rpm. The clutch action is light and smooth, fuelling not too bad at all, the gearbox is slick and the bike is easy to handle around town. 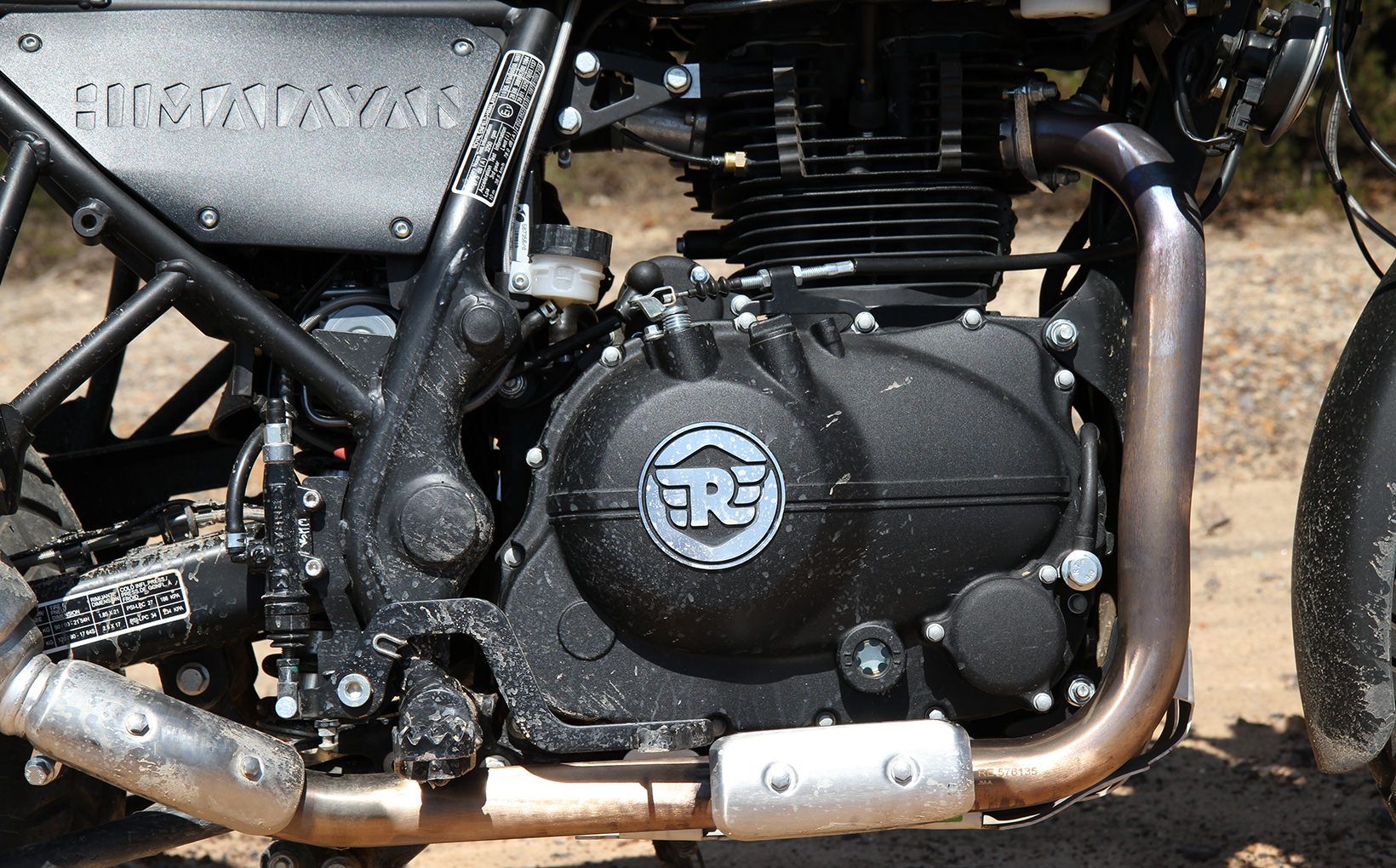 That little motor really punches above its capacity and spec.

Commuting would be no problem on the bike, with a decent view through the mirrors, easy switchgear and a clear enough dash. The horn is pretty loud, too, as most Royal Enfield horns are!

I head up to the hills for some cornering fun. This is where I’m truly surprised by the Himalayan. This thing is a blast! The MT-60 tyres are great on the tarmac, with surprisingly good feel and feedback for their odd sizes and tread design. The bike loves corner speed and commitment. 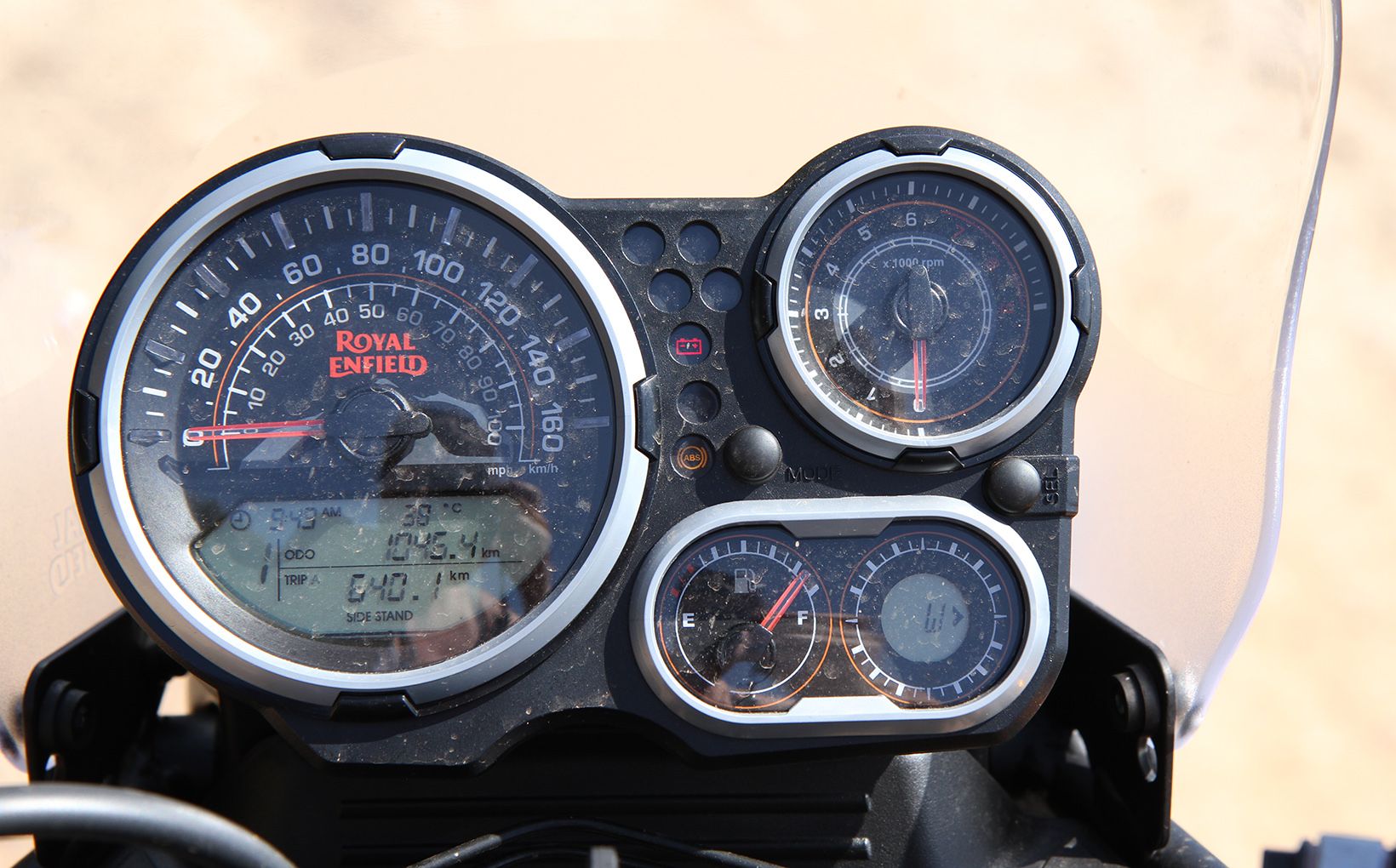 The dash is basic but even has a compass!

Forget the hard braking, the brakes are just adequate anyway but have just the right amount of power and initial bite for the tyres. Cornering the Himalayan is a matter of rolling into turns with a fast entry speed and once the initial turn-in is done, a point where the Himalayan does feel a bit resistant, the bike falls on its side from lean-in to full lean fairly abruptly, yet predictably, then is sits on its side like it is on rails and tracks through the turn, bumps or no bumps… ‘Peg clearance is respectable too. 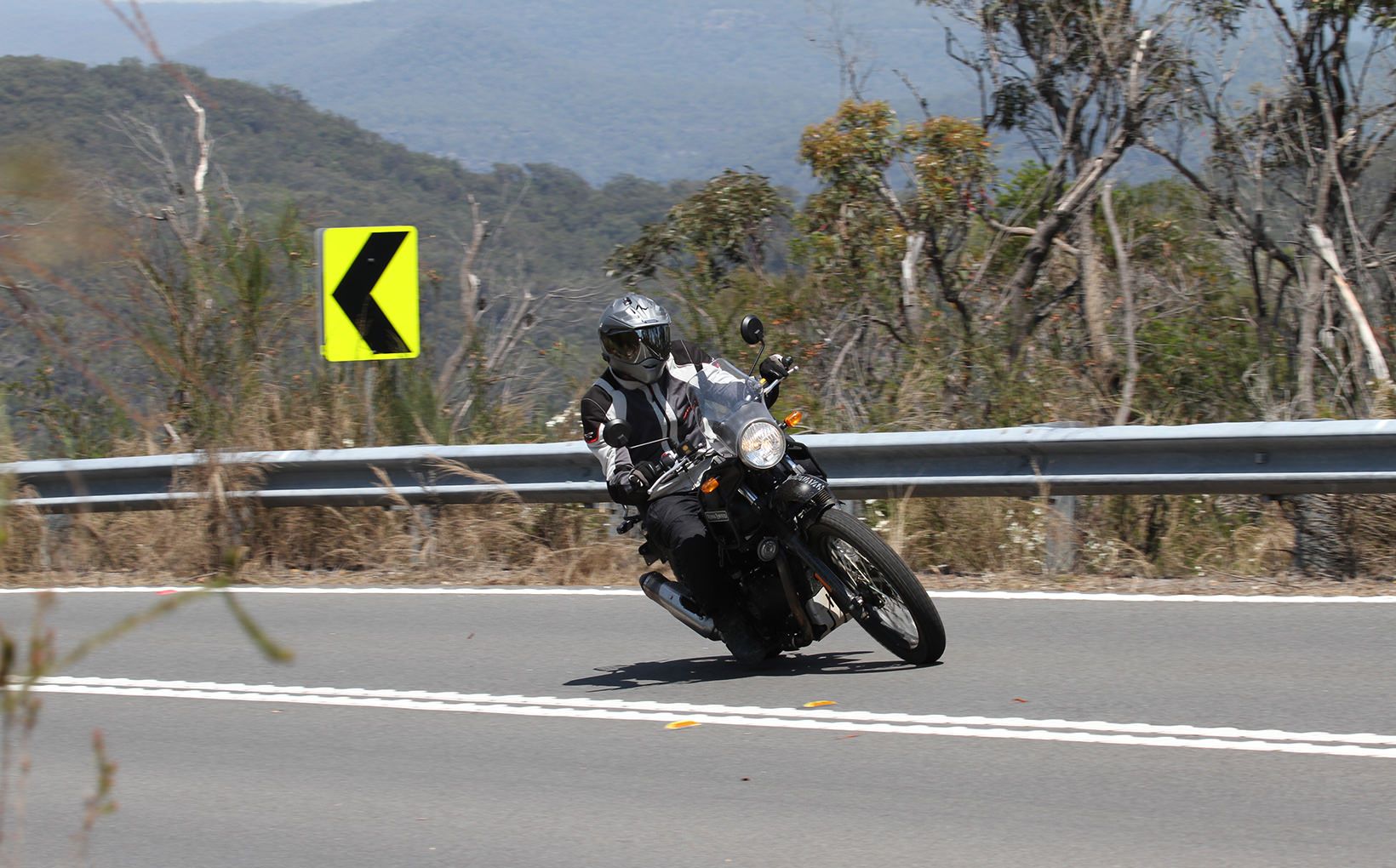 You can really get stuck into the cornering on the duel sport machine.

The engine can be revved but there is little point revving it high. I find 4000 to 5000rpm the most rewarding and progressive. Long, tall, gears mean lazy gear changing is fine. Overall, a rewarding experience in the twisties for what the bike is… take your time, enjoy the ride.

On the open highway, sitting on 110km/h, the Himalayan doesn’t do it easy, but with only 24-ponies that is to be expected. I found the bike was not always willing or able to pull fifth gear up the hilly sections of motorway but at times dropping back to fourth caused the bike to rev beyond the meaty range. 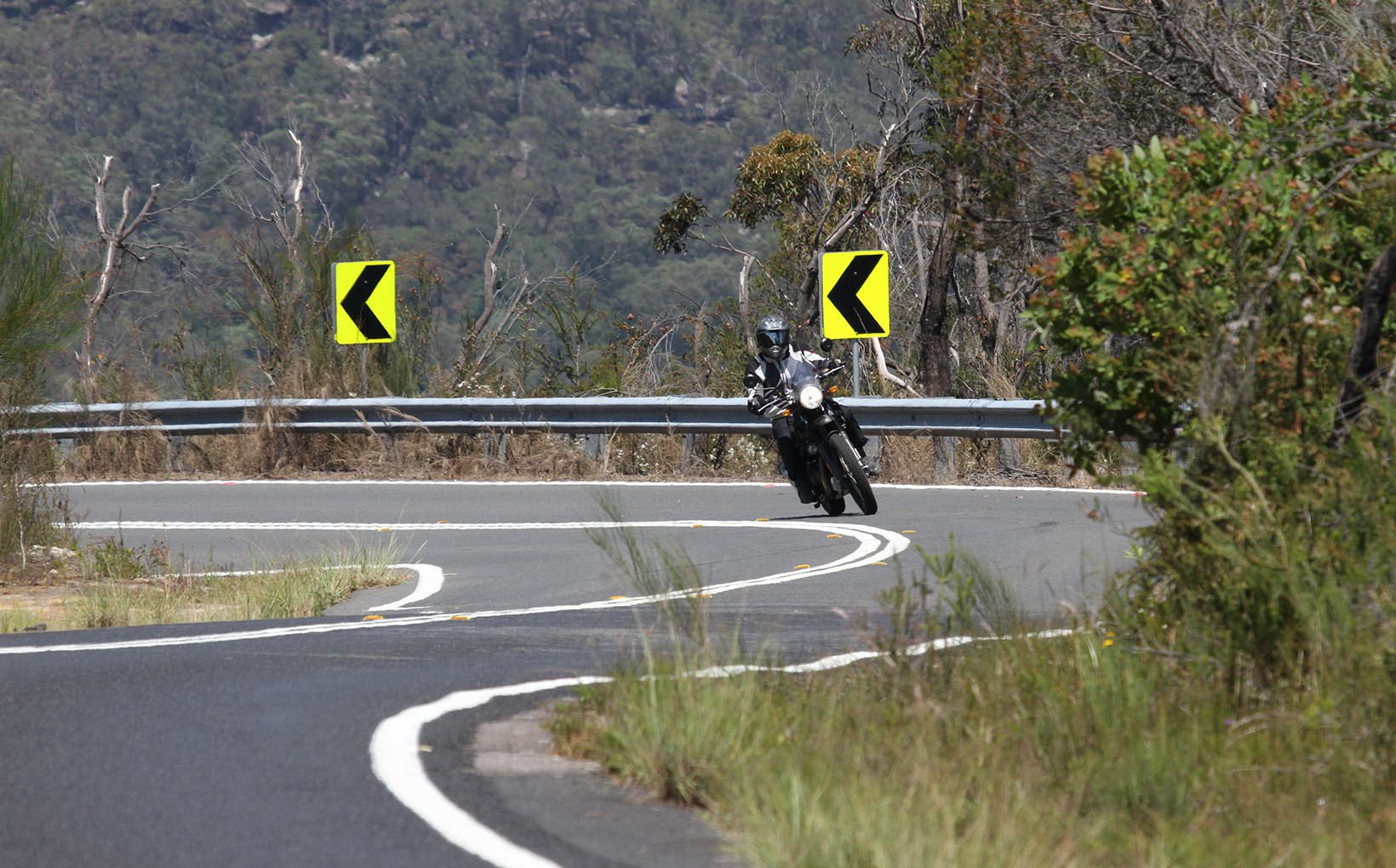 The Himalayan is great fun through the Twisties

Comfort on the highway is an issue for me. The seat is rock hard and agony after just an hour… add in the cramped position and I find myself unable to do more than one-hour stints on the bike.

Protection from the screen is not too bad, vibes a little irritating at times. All-up though, I’d stick to less open roads and shorter trips on the Himalayan, although I’d be keen to try the Touring seat option and play around with the ergonomics a bit. For me, the bike is more a commuter with a weekend adventure advantage than an outright tourer. A great little robust daily rider with good carrying capacity… 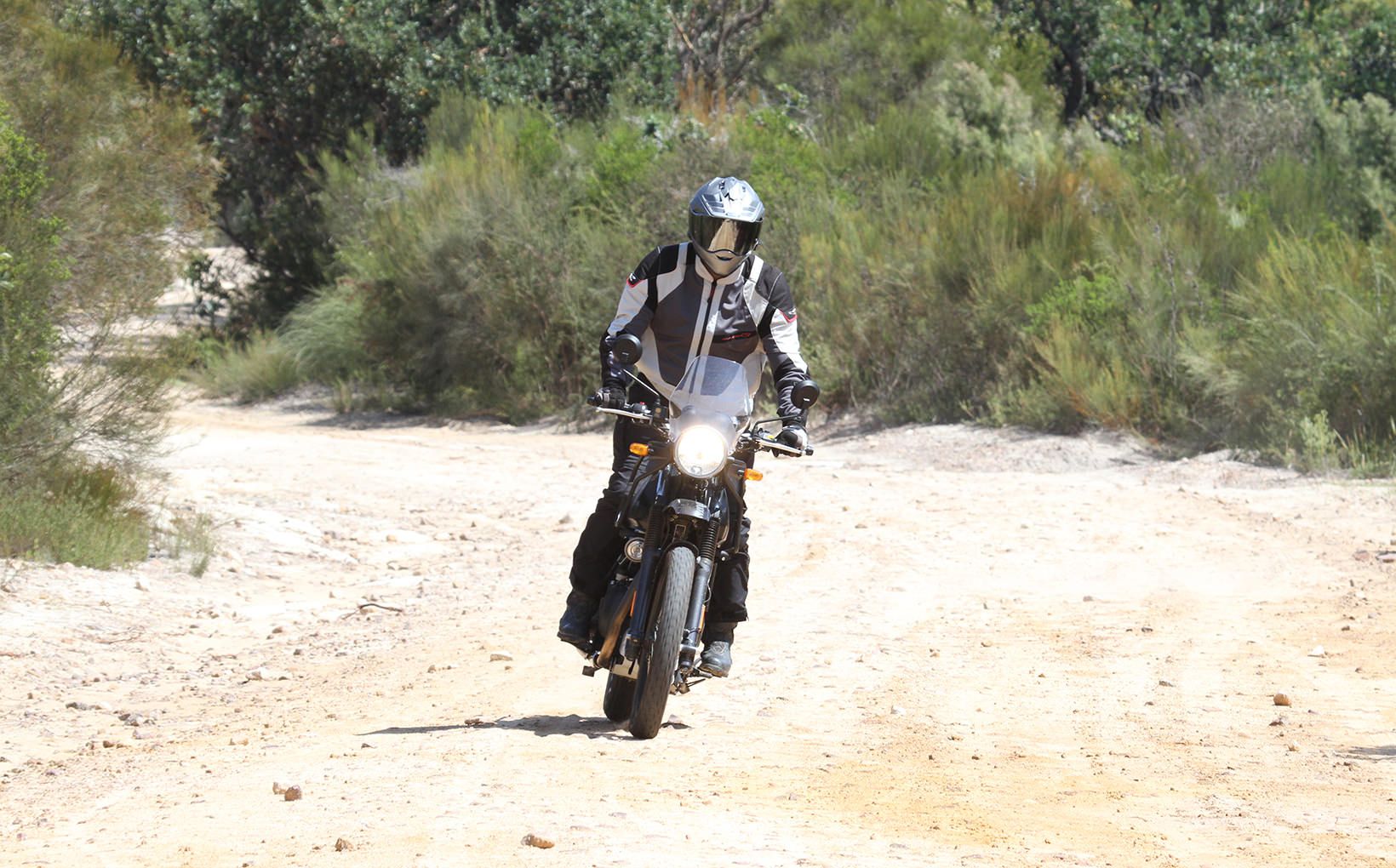 Off-road riding on the Himalayan is a positive experience when riding within the limits of the bike. After the fun on the tarmac I turn left off the road and head bush. The run is a long one, around 38km off road to the historic town of St Albans and back, so 80km of dirt. I don’t touch tyre pressures. I just head off into the hills to see how the bike handles going straight from tarmac to dirt.

The Himalayan is smooth and easy on the flowing dirt road but on standard road pressures the MT-60 tyres are not finding grip at all and a few monumental slides have me pulling up and dropping the pressures by 10psi each end. This makes a big difference but I’m still not confident in the front tyre. 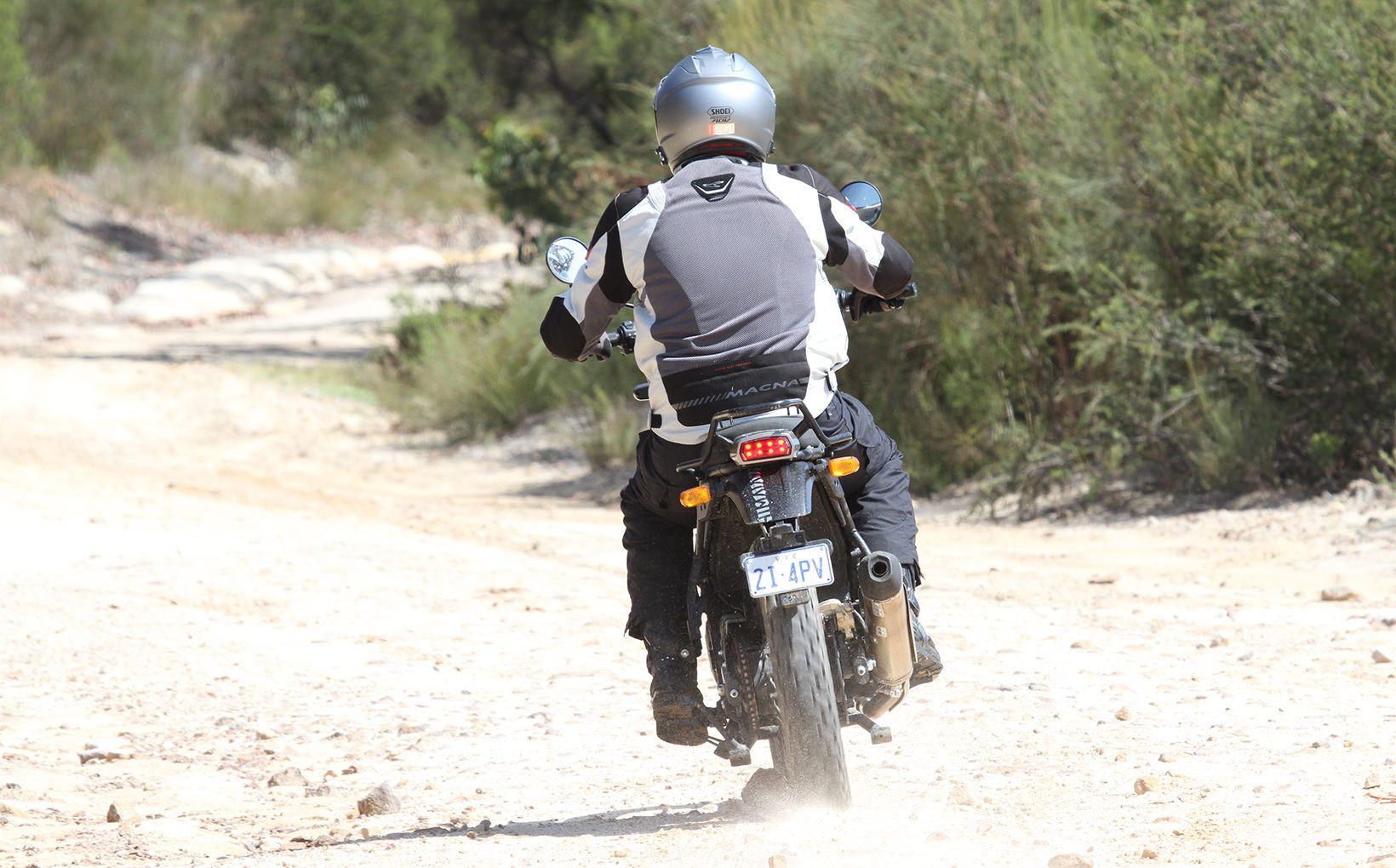 Rear suspension travel is limited so be prepared for the bumps

Off road the Himalayan is fun and capable as long as it is ridden accordingly, more suited to lower speed riding and gentle trails or dirt roads. Try and ride hard and fast and you will soon override the machine.

The suspension is soaking up most of the irregularities. The front is particularly good, while at the back, 180mm of travel is still fairly limiting and bigger bumps bottom the back-end out with a whack. Stability is good though, and the engine is tractable and enjoyable. 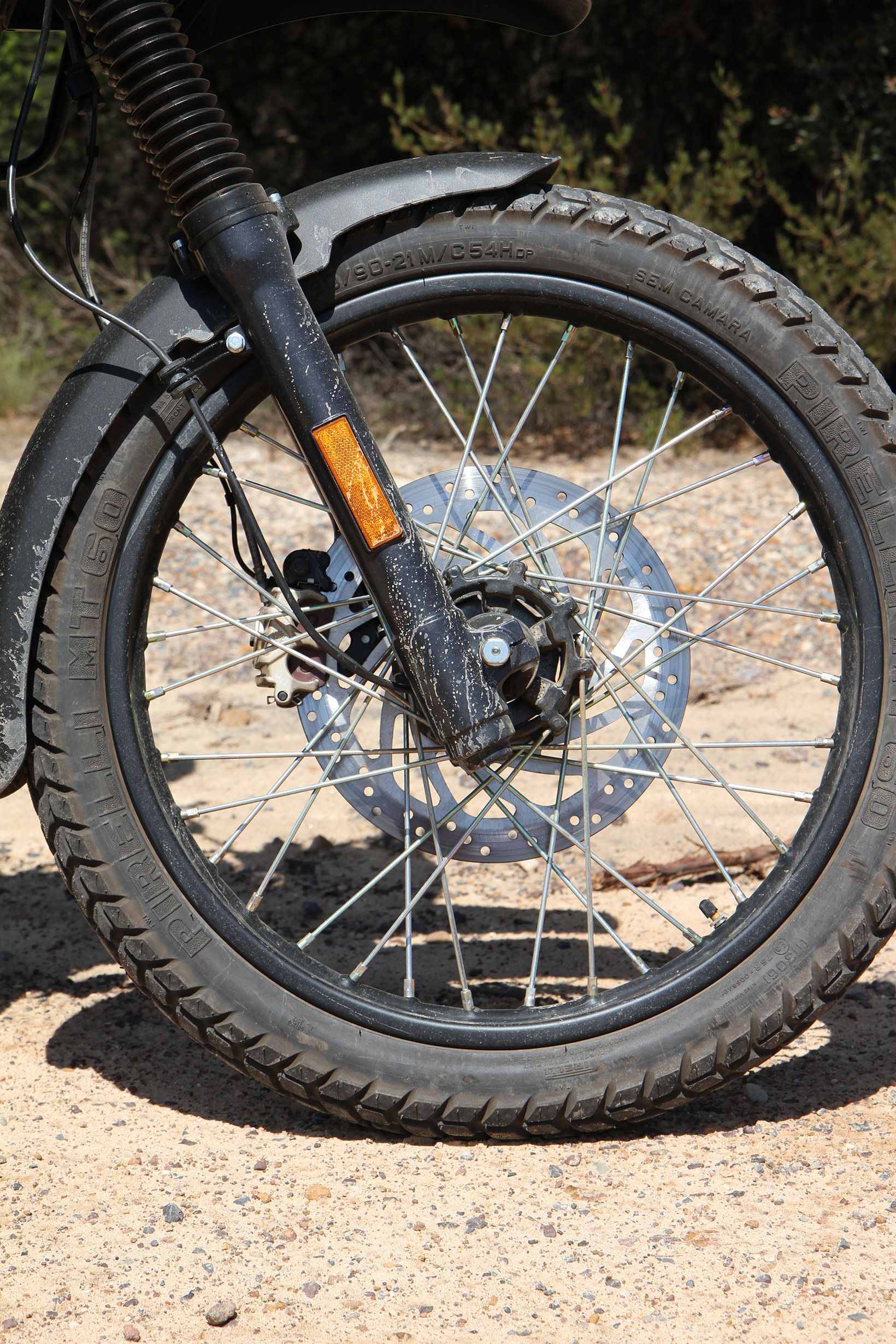 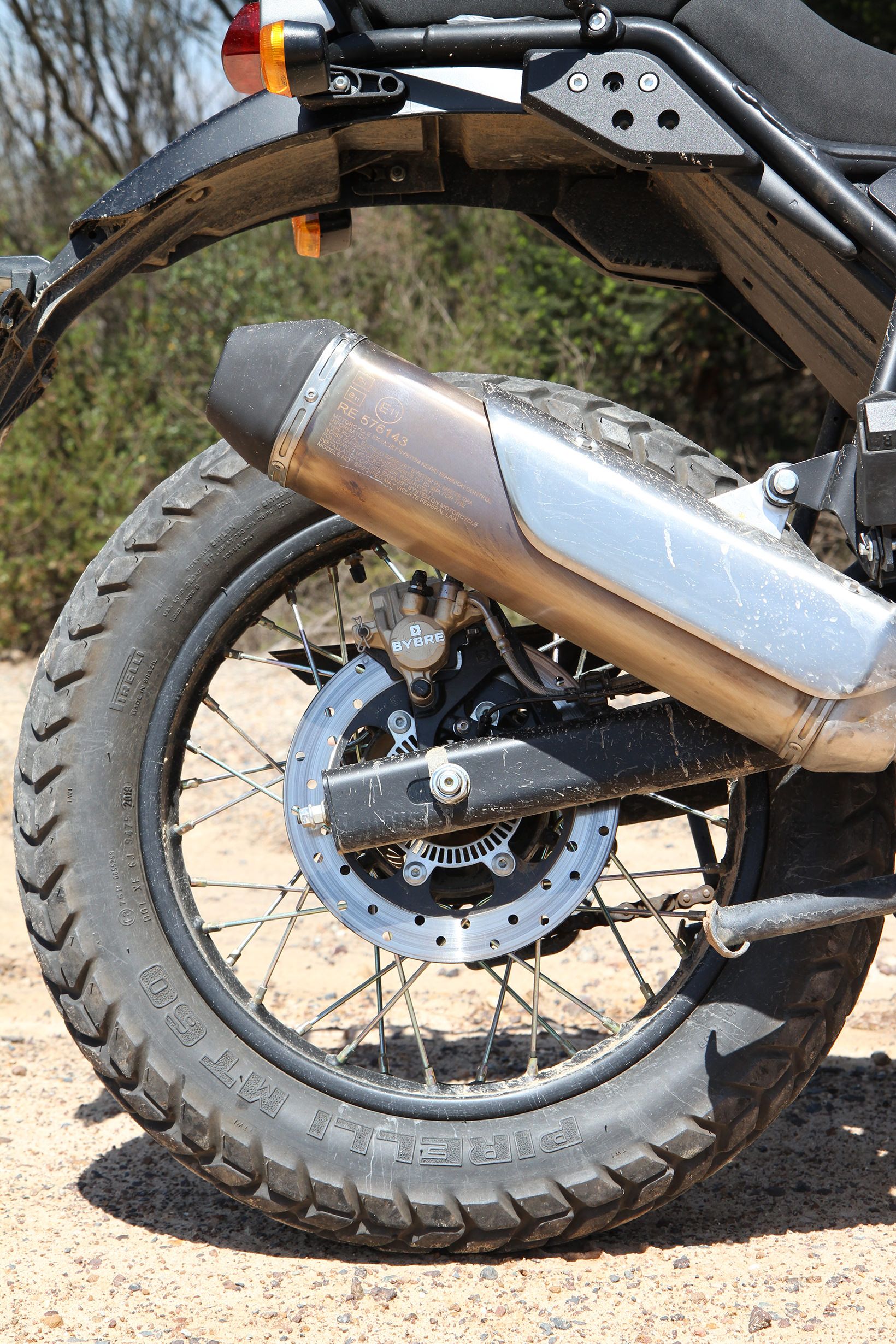 A proper sized 21in front wheel and 17in rear

I head off the road and take on fire trails and a bit of single track for a few hours of play time. This is where the Himalayan is great, the single-cylinder engine thumping along and tooling around the tracks in first and second gear has the bike in its element.

It’s amazing where the Himalayan will go, as I’m on tracks I normally take on a real dirt bike. The advantage also is, due to the size of the bike, there are plenty of places I get into that I could never get to on a full-sized Adventure bike. It’s also easy to pick the Himalayan up off the ground. 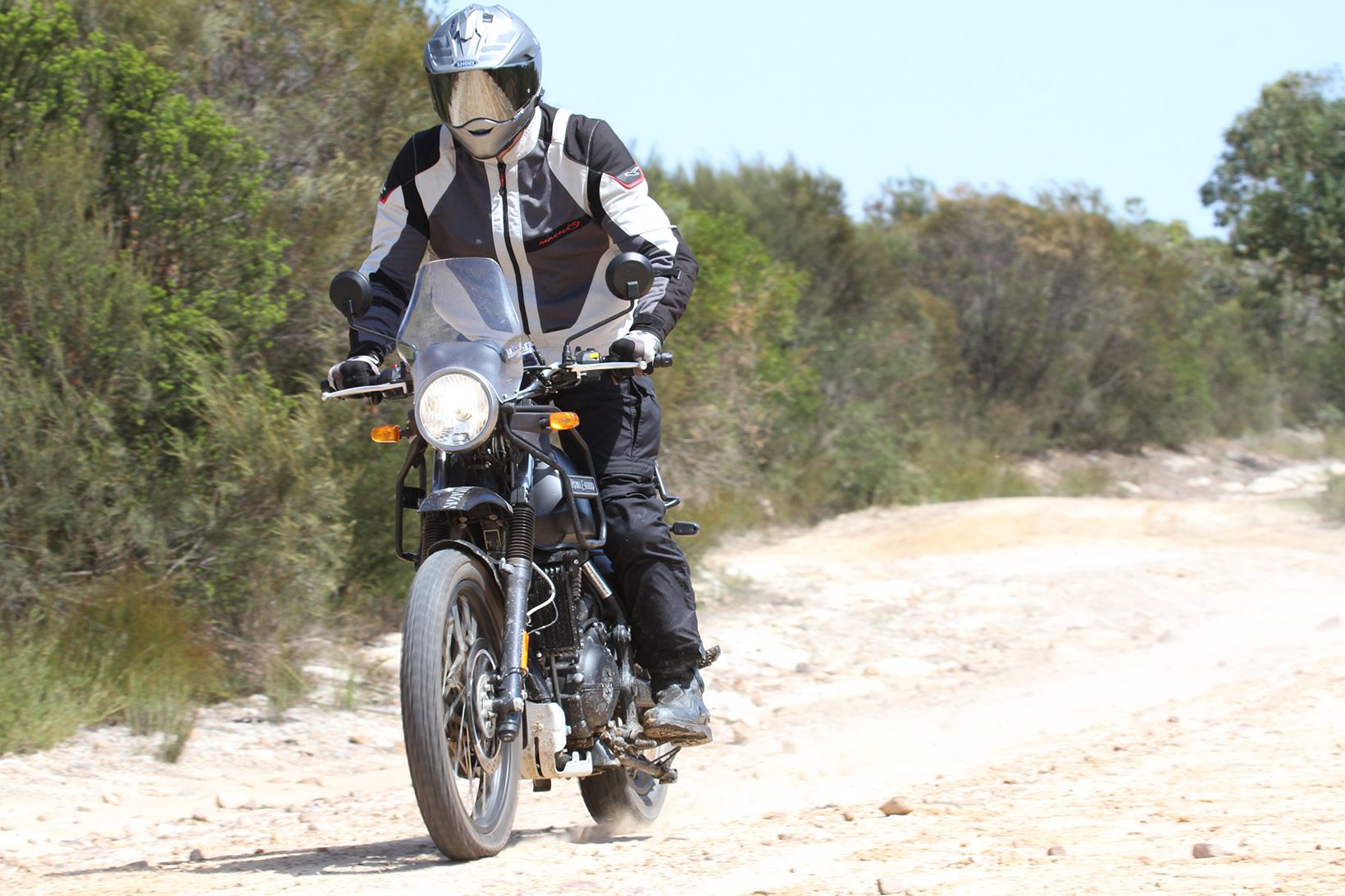 Standing is a little awkward with the wide side covers

Arriving at St Albans, I take a shady spot under a tree and eat my packed lunch and have a cold drink. I’ve done the route plenty of times but that run was relaxed and enjoyable, as really there is no choice on a bike with 24hp. What I appreciate the most about the bike is the engine firstly and the 21in front wheel secondly. I’m not all tired, as I would be on a faster bike, and I’m ready to enjoy the same run back to the tarmac and the 40km ride home through the countryside after that.

Protect your Royal Enfield. Call Shannons Insurance on 13 46 46 to get a quote today.