2018 Harley-Davidson Sport Glide: Glide on by 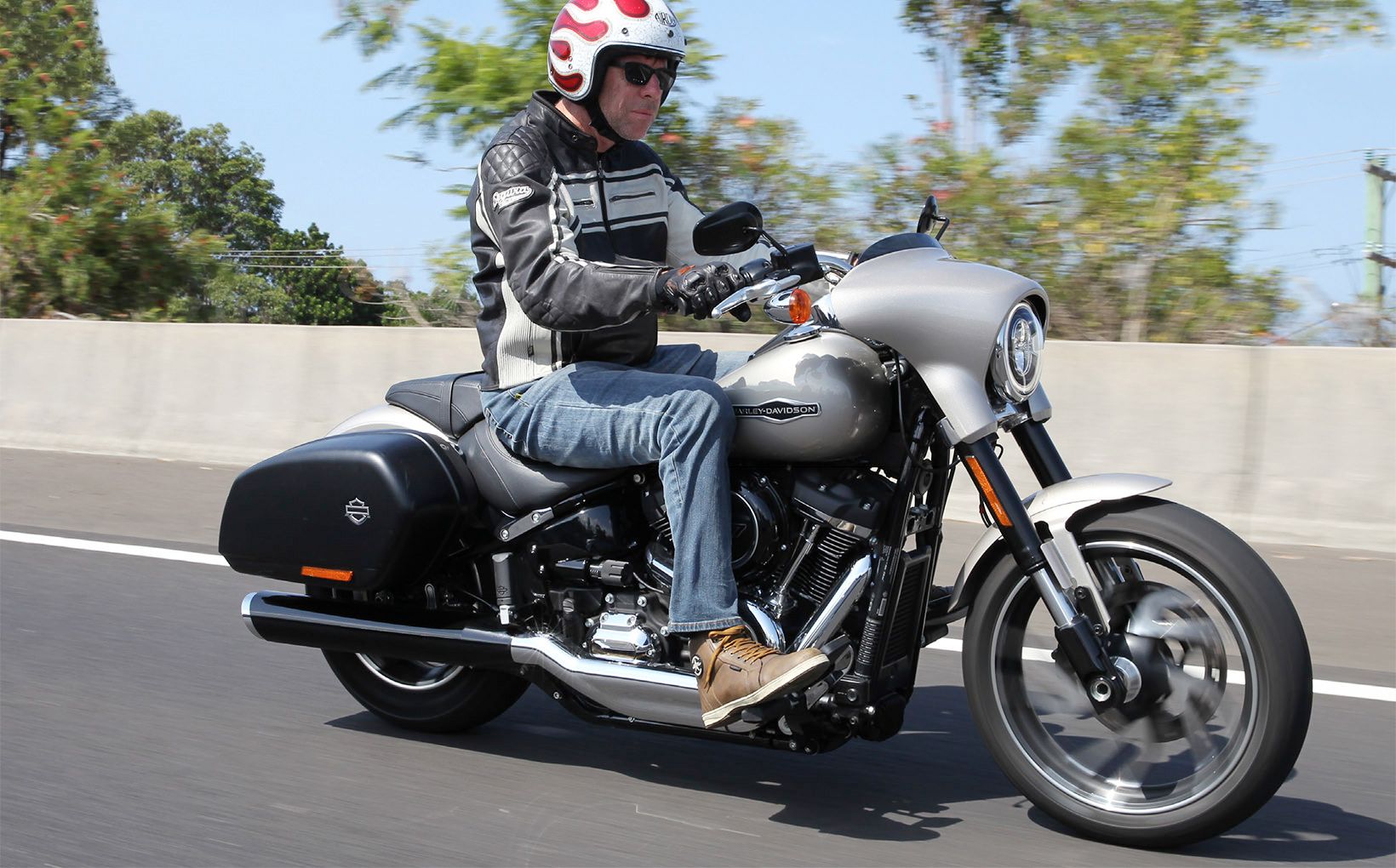 HARLEY’S NEW SPORT Glide is possibly best described as a middleweight sportstourer. It would be a big stretch to imagine riding it around the continent, but its slim fairing, comfortable riding position and respectably sized panniers make it an ideal choice for anyone wanting to join the Harley-Davidson ranks and do some short-to-medium-range touring. We also discovered it’s a handy little cruiser and capable everyday rider.

If you’re thinking light-touring duties in Harley’s Softail line-up is already serviced by its Heritage Softail, you’d be right. But the Sport Glide differs in that it’s designed for those wanting a more modern-looking tourer with a slightly sportier edge.

Looks wise, Harley has done a commendable job of providing the Sport Glide with enough individual styling to set it apart from its Softail siblings. Its contemporary styling is capped off by eye-catching Mantis aluminium wheels, providing an almost custom look, and the 16-inch rear and 18-inch front are fitted with Michelin Scorcher 31 tyres.

Colour-wise, there’s a choice of Vivid Black, Twisty Cherry or Silver Fortune. A couple of wild paint schemes would have been a nice touch to build a little more on the custom look. The headlight and combined taillight/stoplight/ indicator are all LED, while the front indicators remain traditional bulb types. 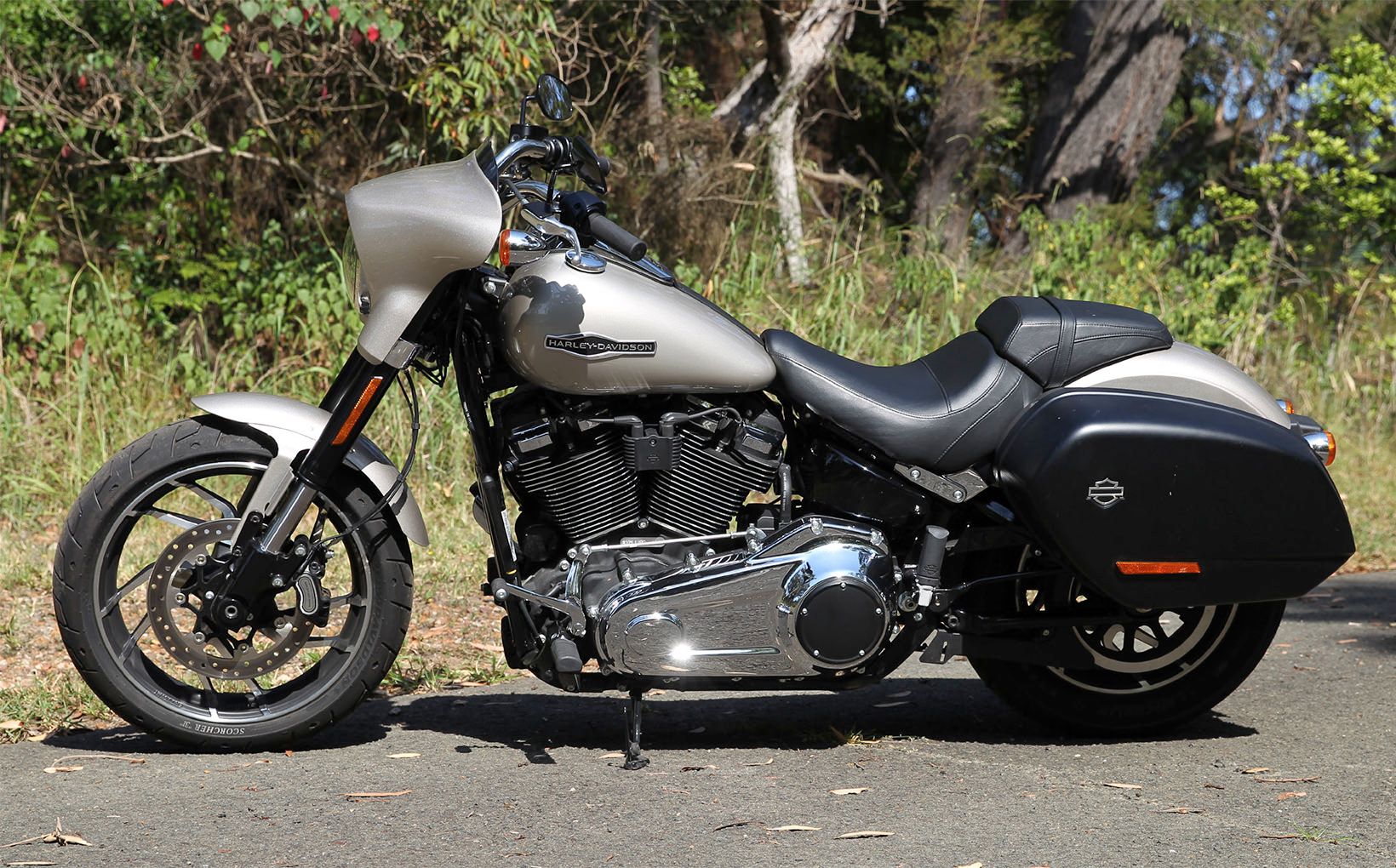 Climbing aboard the Sport Glide reveals yet another Softail with a curious mixture of modern (for Harley) and traditional styling. The instrument binnacle is the old-school tank-mounted design, featuring a large circular analogue speedo. Digital inserts display trip meters, gear-position, fuel level and range-to empty. The tachometer is also digital, and a little too small for my ageing eyesight. And taking your eyes off the road to look at the top of the tank to check your speed takes a bit of getting used to. A USB charging port is located below the steering neck, but there’s no cubbyholes built into the mini batwing fairing to support it – good for a GPS, but not for charging your phone.

While I may appear a little cramped (when don’t I?), the Sport Glide’s ergonomics are comfortable. There’s a hint of sportiness in the rider triangle which helps highlight the reasonably responsive nature of the chassis. The forward-set footpegs (as opposed to the Heritage’s footboards) are the right decision to match the low 680mm seat, preventing a cramped leg position that mid-mount pegs would deliver while still retaining a decent amount of lean angle (27.9° right and 28.7° left). The stretch to the wide and almost-straight handlebar may place shorter-armed riders into a forward crouch, but for me, the reach was spot on.

At a claimed weight of 317kg (wet) it’s quite a hefty machine, but matched with its low seat height, it’s easy to manage. When you take a look at the size of the massive V-twin engine, and the amount of steel used in the chassis, you appreciate the effort that has gone into getting the weight down to that number.

L-R: A relatively low 680mm seat height makes it one of the most accessible cruisers in the business. Plenty of meat to stamp your boot on if you need to use the rear’s single 292mm disc brake in a hurry. Removing the mini-Batwing fairing instantly transforms the look from semi-tourer to naked sports cruiser, the panniers click off pretty quickly, too. Those mantis-style wheels aren’t to everyone’s taste

The detachable side-opening hard cases provide 25.5 litres of storage space, enough for more than a few odds and ends if heading off on an overnighter; or a laptop, files, lunch and a pair of shoes if heading to the office. I managed to squeeze my XL openface helmet and leather jacket into one case, but my full-face helmet was too large.

Despite their differing styles, all nine modes in Harley’s new Softail range benefit from the stiffness of the new monoshock chassis. The 107cu-in (1745cc) V-twin engine is bolted directly to the frame without the use of rubber mounts, making it a stressed member of the chassis. Doing this with the old Twin- Cam 103B engine would have resulted in a bone-rattling ride. The two balancer shafts in the Milwaukee-Eight V-twin deliver Harley’s trademark vibes and rumble at idle but smooths out once the revs rise. A 270-degree crank ensures the Sport Glide sounds like a Harley, albeit quite a muted one with the stock 2-1-2 exhaust system.

Through the urban jungle, and the lowspeed twisties of a good country road, the tiny screen provided an enjoyable wind-inthe- face ride, but at freeway speeds it offers negligible protection. Anyone serious about touring may want to consider fitting the optional 140mm screen ($237.94 ) 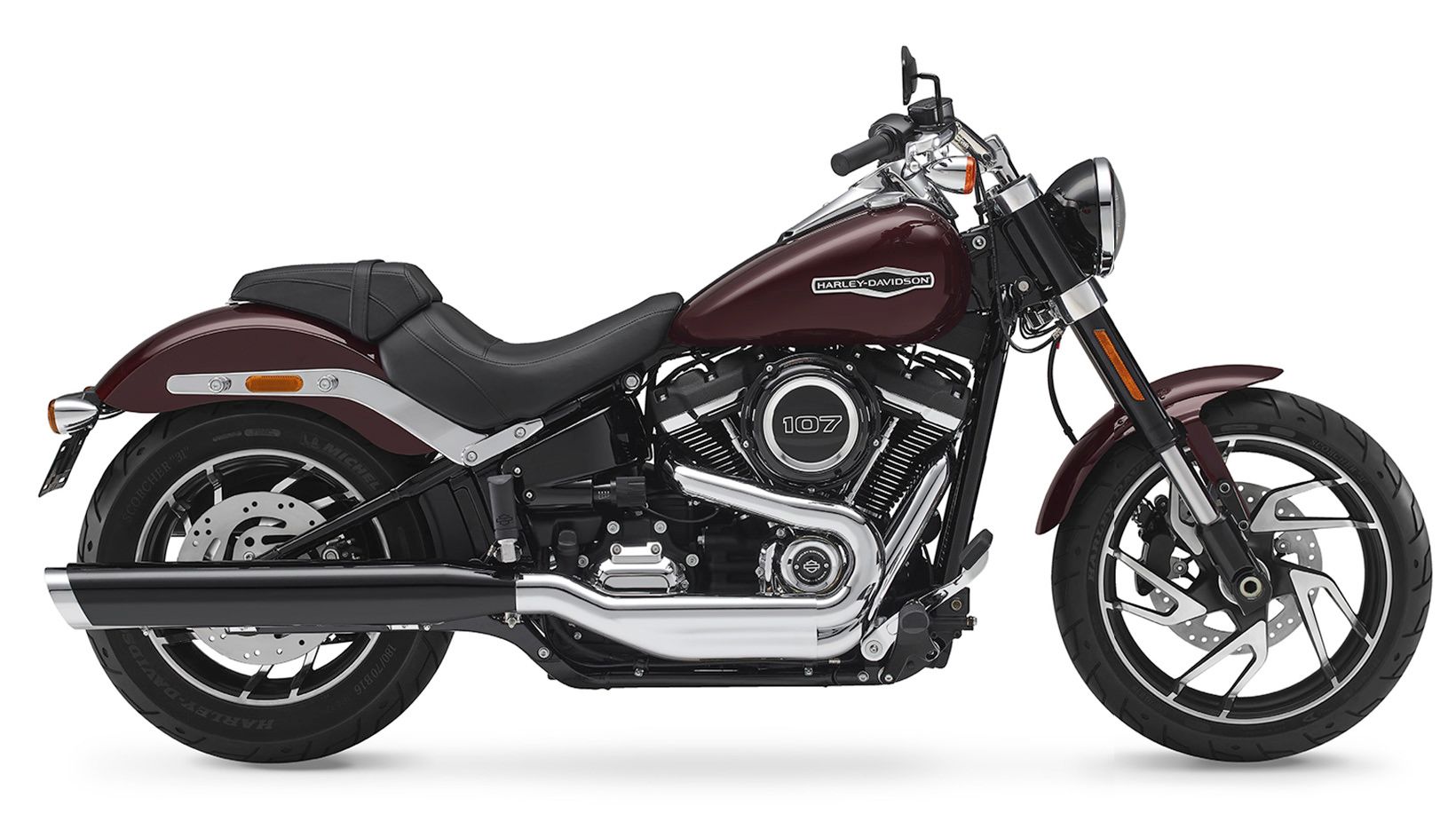 The Sport Glide is one of the Softail models offered only with the 107cu-in donk, with no optional 114cu-in unit on offer. Having ridden both, I prefer the 114 engine for the little extra punch it provides but the 107 unit is still more than up to the task of hauling around the Sport Glide’s 317 kilograms. The combined weight quickly blew out to around 500kg when I took the missus for a run down the coast with all of our gear stuffed into the panniers. The engine’s peak torque of 145Nm arrives at just 3000rpm, which means it pulls like a train from a standing start. Revving it past 4500rpm is pointless, it’s best to select the next gear and keep surging forward. The sixspeed Cruise Drive gearbox is a major step up from previous offerings. You still feel a decent clunk each time you select a new gear, but it’s a reassuring clunk rather than one that makes you wince.

Left: It’s a good idea to don a glove if you need to adjust the preload while the header
pipe is still hot Right: Practical and good looking, there’s not much the Sport Glide couldn’t do if pushed

Putting a little more sport into the Sport Glide is the same 43mm inverted, dualbending, non-adjustable cartridge fork used on the Fab Bob. Despite sharing the hardware, the feel from the front end of the Sport Glide is completely different to that of the Fat Bob due to their differing frontend geometry. The Fat Bob has 28 degrees of rake, 132mm of trail and runs on 16-inch wheels with fat rubber. The Sport Glide has a more raked-out front at 30 degrees, with 150mm of trail. It has an 18-inch front wheel and a much narrower-profile hoop. Add in a 1625mm wheelbase, and the result is a bike that still offers a good amount of feedback from the front end but is not a super-quick turner. It still enjoys being pushed along a twisty road with a bit of gusto, thanks to an impressive chassis, just keep your heels high.

The rear shock is adjustable for preload via a remote hydraulic adjuster knob located in close proximity to the header pipe, so care needs to be taken when making adjustments if the engine is hot – I wore a glove. Riding twoup with full panniers, I set the preload at 4.0 from its maximum of five. Riding solo, with panniers carrying a few lightweight odds and sods, I initially set the preload to level 3.0 but I found the rear to be a little too firm, so I dropped down to level 2.0 and then to level 1.5 once the panniers were empty. I found these settings provided the most comfortable ride for my 88kg frame given the relatively short 89mm of travel (compared to 130mm at the front).

My first few short-haul rides were conducted in unseasonably cool weather, but when it came time to spend a full day cruising along the coast, the mercury had risen considerably. On the move, the big V-twin is easily cooled by the oil/air cooling system. At a standstill in traffic, I felt my left ankle getting a little cooked by the heat from the engine case. 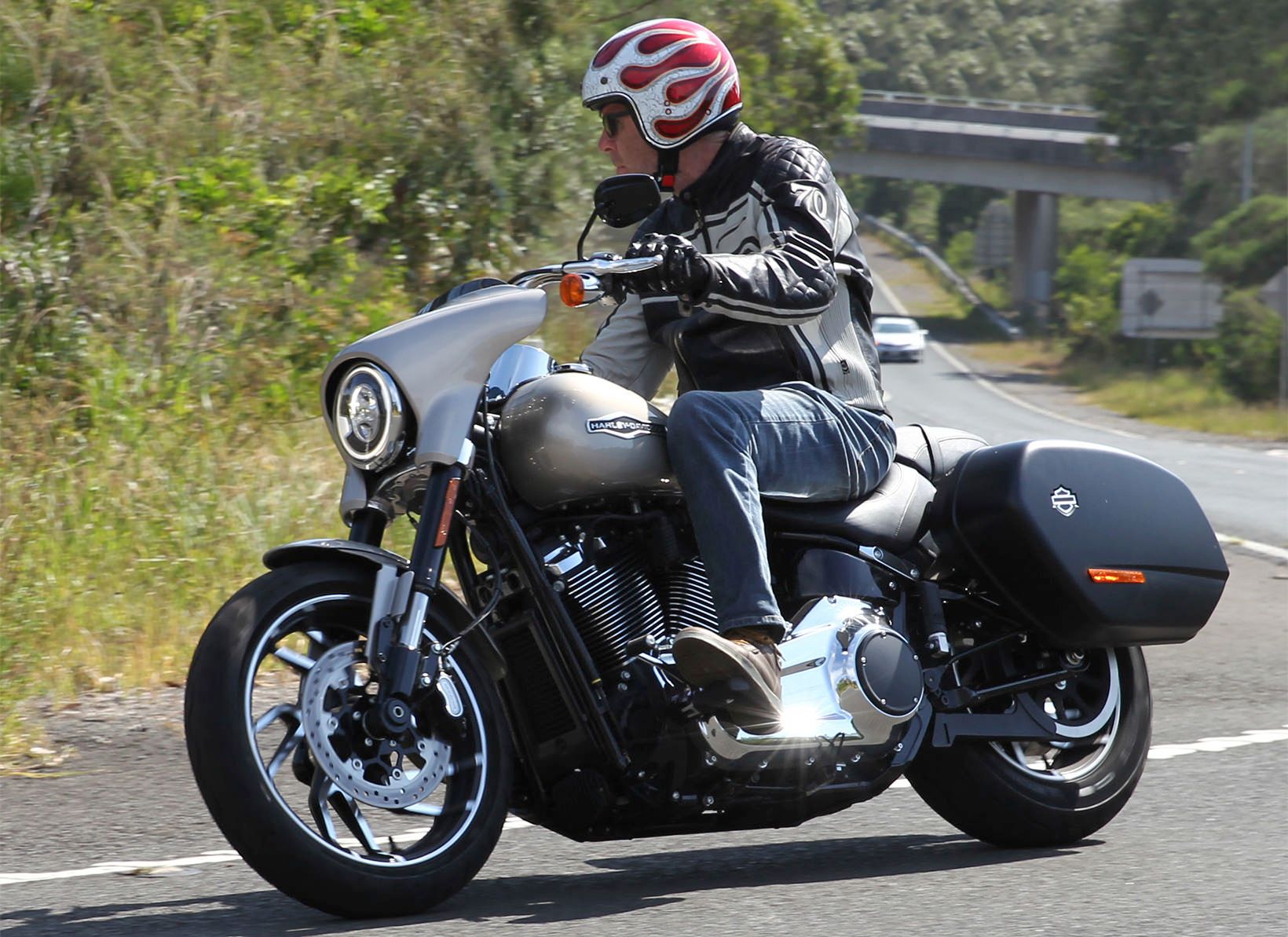 Braking is handled by a single 300mm front disc and four-piston caliper, which means the Fat Bob remains the only twin-disc model in the new Softail line-up. Like all the Softail models, the brake lever has a solid feel.

There’s also bucket loads of engine braking on offer from the big V-twin.

Platform sharing is something Harley-Davidson does well. Without sampling the Softail range you may think it is just one bike done nine ways, but each has its own distinct personality.

There are plenty of models and styles available across H-D’s current line up, and it seems to be growing by the month, but I reckon the new Softail range is its most impressive. The Sport Glide retails for $27,750 (ride away) which sits in between the Deluxe and the Fatbob in the Softail range. For under $30K you are getting onto a Harley that offers a lot more engine and chassis performance than any Dyna or Softail before it. It’s also got more grunt than a Sportster and will take you to further away places.

It’s the best of both worlds.

Protect your Harley-Davidson. Call Shannons Insurance on 13 46 46 to get a quote today.