2221 people have viewed this lot

Porsche’s remarkable 356 put the Zuffenhausen company firmly on the automotive map in the 1950s, with Dr Ferdinand’s original design - a somewhat basic sports car closely based on Volkswagen’s Beetle - evolving into a technically advanced, beautifully resolved machine over a production life spanning more than fifteen years.  The earliest Gmünd-built cars were somewhat underpowered and primitive in terms of equipment but the 356 matured into a sophisticated sports car by the late 1950s, with the 356A introduced at the 1955 Frankfurt Motor Show heralding the biggest changes yet.  Gone was the so-called bent window (a legacy of the original split screen bodywork), replaced with a single curved piece of glass, along with a revised interior (including a decent heater), new suspension settings, a steering damper and 15-inch wheels and crossply tyres.  Available with both 1300cc (Normal) and 1600cc (Super) engines, the 356A was both more powerful and reliable than earlier models thanks to a new three-piece crankshaft and revised cooling system.  In addition to the coupe and cabriolet models, the stripped-out Speedster continued to prove popular in North America.  The revised, so-called ‘T2’ body appeared in 1957, with teardrop tail lamps, a repositioned lamp for the licence plate and reshaped seats.  Mechanically Porsche dropped the 1300cc engine and replaced the Solex carburettors with Zenith items; the 1600 Normal developed 70 horsepower at 5000rpm, while the 1600 Super extracted an additional five horses.  For those customers wanting even more power or to compete on the track, Porsche also added the legendary Carrera to the line-up, using a version of the complex four-cam motor found in the 550 Spyder.  Hugely popular in America and at home, relatively few 356s were made for right hand drive markets like England and Australia, where taxes and import duties made them prohibitively expensive.  Local distributor Norman Hamilton was patronised by a small band of well-heeled customers and the 356A was an unfamiliar sight on the roads of Sydney or Melbourne in the 1950s, with several appearing at Bathurst and elsewhere.

Fresh from five decades of continuous ownership, this incredible Porsche 356A ‘barn find’ is a rare Cabriolet completed in November 1958 in white with red leatherette upholstery.  Porsche’s records confirm the car was delivered through the Australian distributors Norman Hamilton in Melbourne in right-hand drive with a long list of options including a Ruby Red hardtop, black convertible top, American-style bumpers, Koni dampers, green tinted windscreen, electric clock, Bosch 40/45 watt headlamps, “Ponto” mirror and sunblinds with make-up mirrors.  Local Porsche authority Phil Schudmak reports the car was retailed through Diesel Motors, a business operated by Sydney businessman and serial 356 owner Laurie O’Neil.  At some point early in its life the original Super 1600 engine failed and a period correct Super unit (numbered P 81613, a motor from an Australian delivered 356A Coupe) was installed – we know the engine swap had taken place by the time the current long-term owner purchased the 356 in 1970, as it appears on the sales receipt.  Dated March 6, 1970 the invoice from Maxim Motors Pty Ltd in the Brisbane suburb of Bowen Hills confirms the Porsche was purchased by the long-term owner for the princely sum of $912.00 (including a $250.00 trade in for her 1956 Volkswagen Beetle) and has remained in the same family ever since.  A period image believed to date from the 1980s shows the little Porsche wearing its by-now black hardtop and Rudge wheels looking a little worse for wear but still very much registered and on the road.  At some stage in the 1990s ownership transferred to her son and the car ended up in storage under a local church in Newmarket from 1995 (when it last turned a wheel under its own power) until 2020, slowly deteriorating to the condition we see today.  Showing 12,482 miles on the clock, the 356 was recently disinterred from storage and transported to Sydney for auction and despite the ravages of time, remains in remarkably complete, undisturbed condition.  Sold unregistered, the car comes with a jack, hammer and spare Rudge wheel plus the original handbooks but no longer has the soft top and hood mechanism. 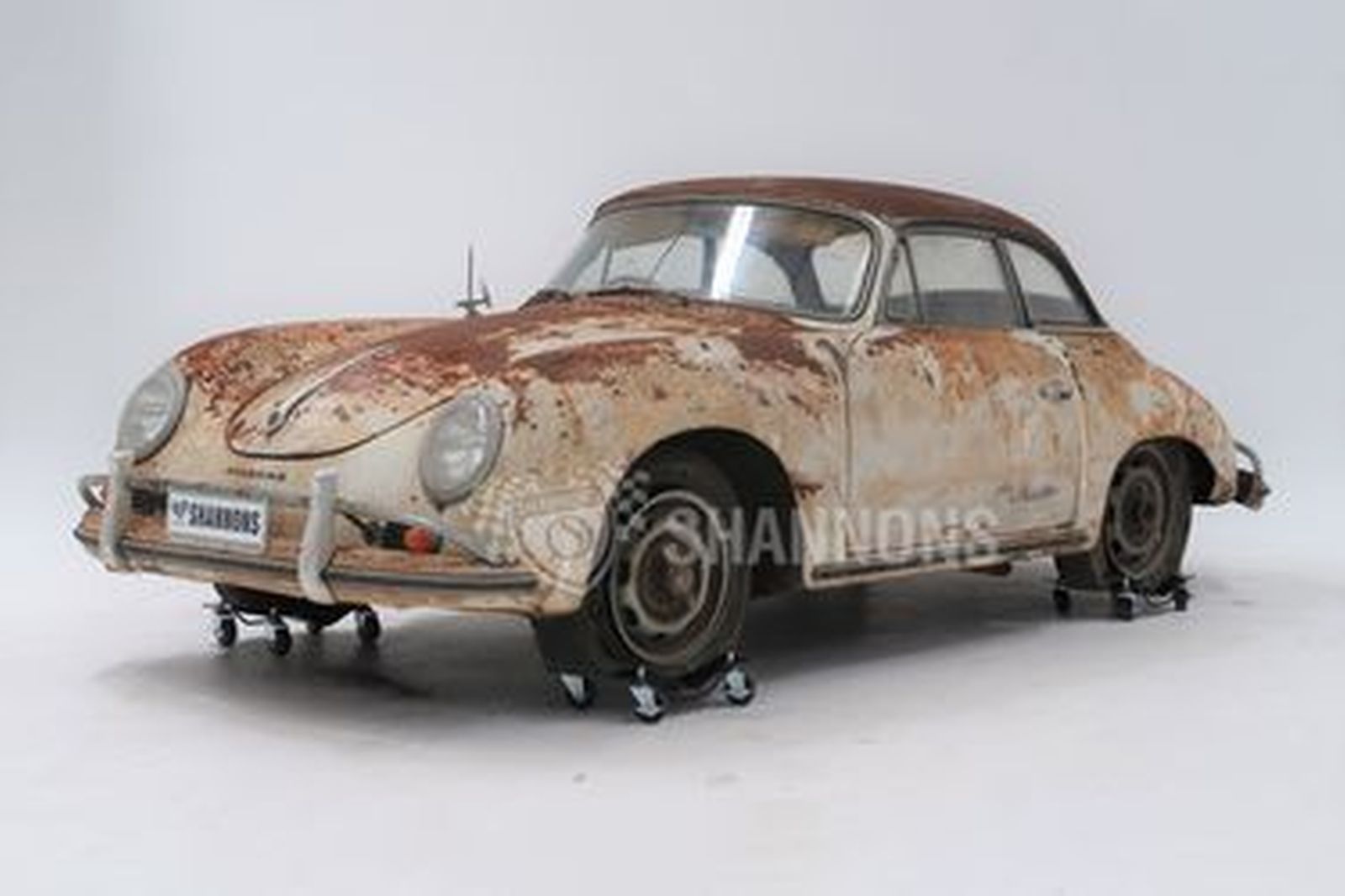