1533 people have viewed this lot

One by-product of military conflict is the rapid pace of technical development and an example of this was the United States Army, which created an entirely new class of vehicle during World War II, one that remains hugely popular today - the off-roader. Willys-Overland Motors, best known for its iconic Jeep CJ that proved so effective in wartime, also produced a four-wheel-drive truck between 1947 and 1965. The Truck’s styling and engineering was based on other existing models, the Willys Jeep Station Wagon, and the Jeep CJ-2A. Introduced as a one ton truck with a 2997mm wheelbase, it was available as a utility truck, a platform stake truck, a chassis cab, or a bare chassis. A three-quarter ton two-wheel drive version also became available in 1949. For 1950 the Willys Truck was restyled with a V-shaped grille with five horizontal bars (which has since become the Jeep trademark) and the following year its original flathead four was replaced by a Hurricane four-cylinder engine, increasing power from 47 kW to 54 kW. It was available only with a Borg-Warner T-90 three-speed manual, with synchro on second and third gears, while a Spicer/Dana 18 transfer case was used on the four-wheel drive models, replacing a Timken 51540 and then the Dana 53 used in the early years of production. The front axle was a Dana 25. Over 200,000 of the Willys Trucks are thought to have been manufactured.


Say “Willys” and you immediately think “Jeep” but in its earlier days not every model from this American manufacturer wore that Jeep appellation. Here we have a Willys Tray utility from 1952 with an indicated 20,450 Kms showing on the speedo at the time of cataloguing, has been much modified since it left the factory. What started out as a fairly rudimentary workhorse has been ‘gentrified’ (as they say in real estate), making it more useable in the modern world. Gone is the original Hurricane four, replaced by a Holden 186ci six, while similarly the Borg Warner three-speed has been usurped by a Toyota Supra five-speed. Aftermarket “Sunraysia style” rims replace the original steel rims. Out back the original utility tub or platform stake bed has been replaced by an AU Falcon tray, complete with black tonneau. The exterior has then been finished in a striking two-tone black over silver paint scheme, with driving lights added up front and reversing spots at the rear. The period peaked sunvisor over the windscreen is still in place, a nice original touch. Inside has seen extensive change, with even the dashboard swapped out for a new unit that features extensive gauges and woodgrain trim, which also extends to the door cards. Cloth and vinyl trim in a combination of grey, black and white feature on the bench seat, there’s a small aftermarket steering wheel, and an additional overhead control panel above the windscreen, behind which is a sunroof. A lot of work has gone into creating the new interior, which presents in good shape, as does the paintwork. This Willys comes with original Owner’s Manual and Workshop Manual, plus copies of the owner’s handbook and repair manual. Certainly not something you see every day, this Willys would make a great promotional vehicle or general runaround. From a deceased estate, the 1952 Willys Tray truck is being sold here as a No Reserve. 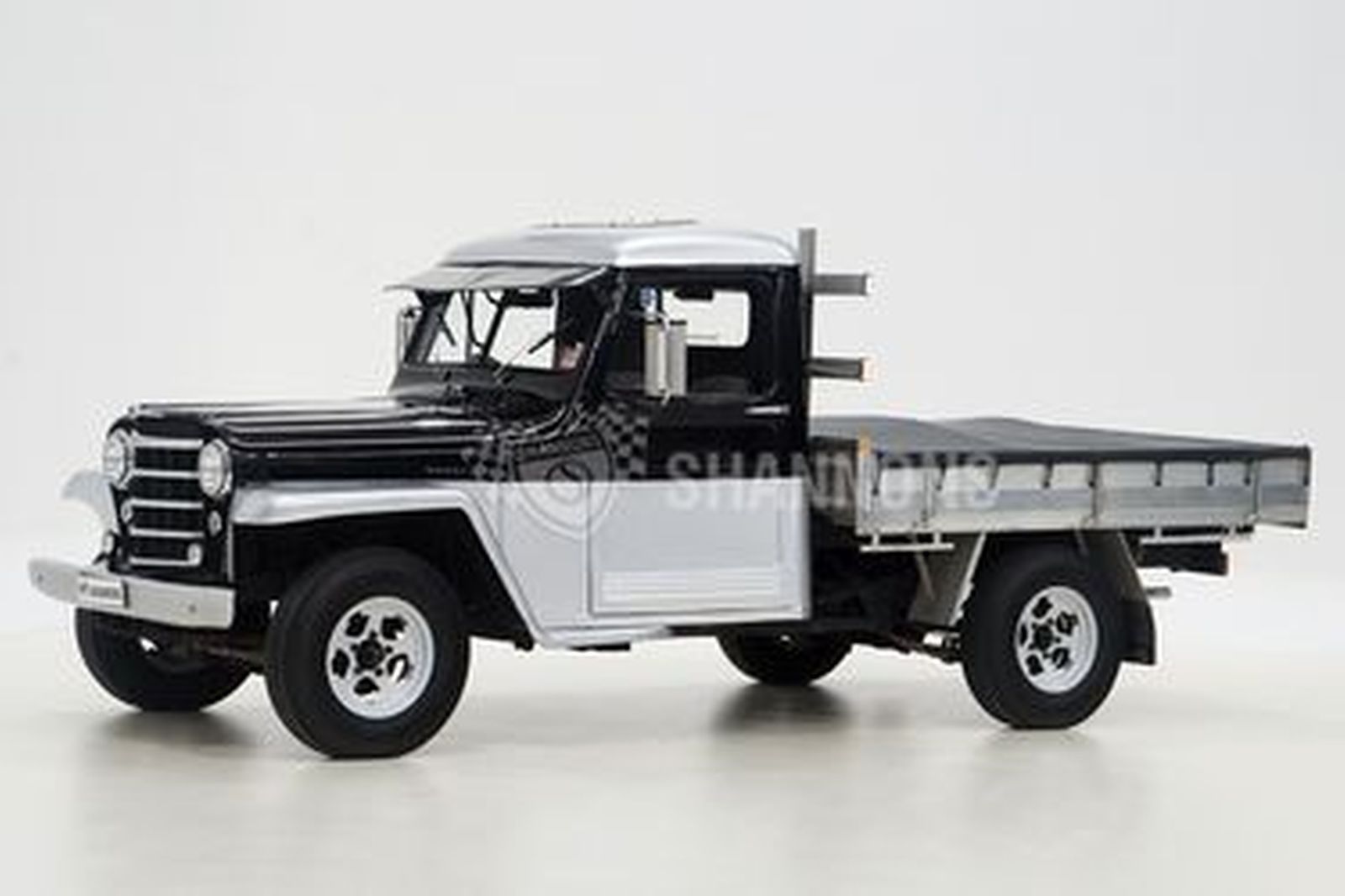