2746 people have viewed this lot

The Volkswagen Type 2 (T1) – better known to Australians as the Kombi – was introduced in 1949 and rapidly established itself as one of the most versatile and popular commercial vehicles ever made. Sharing the same reliable running gear found in the Beetle, the Kombi’s unitary construction bodywork was supported by a ladder frame ideally suited for load carrying. The Type 2 was initially sold as a van, bus, or pick-up, although as time went on these basic models were expanded into a bewildering array of offshoots, including campers, ambulances and many more derivatives. First seen in Australia in 1953 and sold as Completely Knocked Down (CKD) vehicles assembled at the Clayton plant in Melbourne between 1954 and 1977, the Kombi proved hugely successful in this country and for years they were a common sight on our roads. The original Kombi featured a split windscreen body style (retrospectively termed T1) and initially started out with an 1131cc flat-four engine, with mechanical changes mirroring the Beetle then later engine sizes up to 1500cc. Once the preserve of hippies looking for cheap transport, the Kombi now enjoys a cult following around the world and values of early ‘split window’ models continue to skyrocket.

Possibly the best restored Volkswagen Kombi Type 2 Transporter Single Cab ‘Muffin Top’ Utility in Australia, this genuine 1967 example was one of the last produced here at VW’s Clayton (Melbourne) assembly plant. It has undergone a professional five-year full rotisserie restoration by Nostalgia Panels (finished in 2012) and still presents superbly throughout. Where required new replacement panels (not patches) were used including the tray support rails, tray bed, nose panel, inner valances, doglegs, cab floor treasure chest lid, rear corners, side drop gates and tailgate. Underneath was treated to a rubberised ‘stone guard’ kit while on top the Ute has been finished in two-pack Cobra Black over Ultra Red, which really pops. The original bumpers were repaired and re-chromed, new California Split Window frames fitted (front and rear), new glass installed, and new door, engine bay and window seals fitted. New VW lighting and vintage-style fog lamps finish the Single Cab Ute’s body, while it sits low thanks to a Creative IRS kit and a set of Wide 5 Radar alloys wheels fitted with Michelin Pilot Sports radials. Replica hood bows and timbers have also been installed over an unmarked painted load bay. Inside, the original cabin was retrimmed in burgundy vinyl with white piping, black carpets and beige felt headlining. All the T2’s instruments were serviced and calibrated, and a replica period European radio with iPhone connectivity added. Volkshome built a ported and polished 1776cc flat four engine which uses an aluminium crankcase, sports crankshaft, Kadron twin 40mm carby kit, Degree pulley, custom exhaust, and an oil cooler. This is hooked up to a longer-legged Superbug transmission, while a new wiring loom installed along with a 12V conversion, plus the fuel tank and filler were reconditioned. Absolutely beautifully executed, this stunning ‘Muffin Top’ Ute is an absolute head tuner that is going to be of enormous interest to VW collectors everywhere. Previously on full Victorian registration, our 1967 VW Type 2 Kombi Transporter Single Cab Utility is being offered for sale here unregistered. 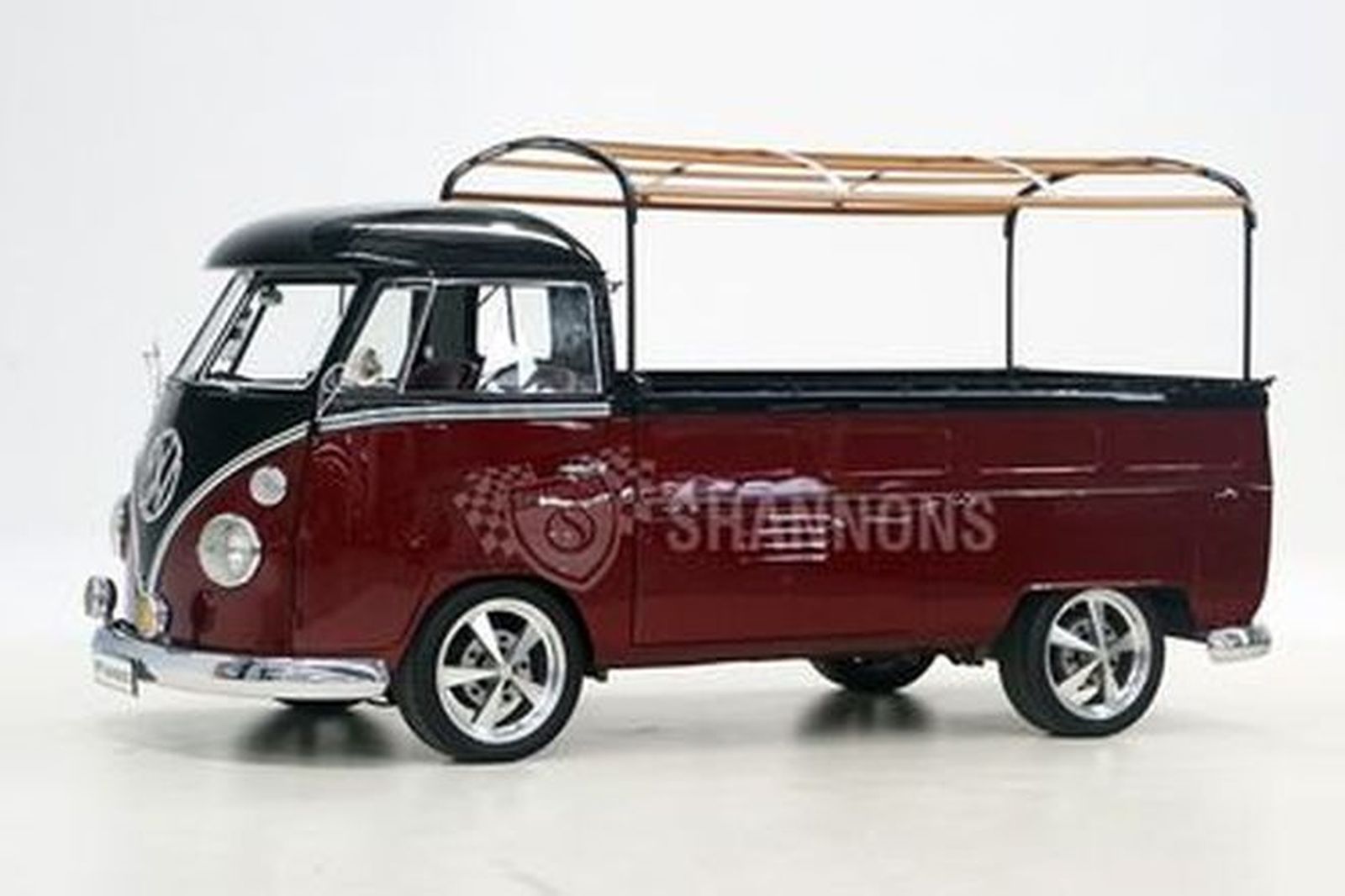