3503 people have viewed this lot

The Daimler Motor Company Limited was founded in London by H. J. Lawson in 1896, with a manufacturing base in Coventry. After early financial difficulties, Daimler was purchased by the Birmingham Small Arms Company (BSA) in 1910, which also made cars under its own name before the Second World War. Daimler’s first car had left the works in January 1897, fitted with a Panhard engine, followed in March by the first Daimler-engined cars. By mid-year Daimler was producing three of its own cars a week and also making Léon Bollée cars under license. Lawson claimed to have made 20 cars by July 1897. These earliest Daimlers had a twin-cylinder, 1526cc engine, mounted at the front of the car, with a four-speed gearbox and chain drive to the rear wheels. Various models followed in ever greater engine capacity, mechanical sophistication, and performance, though production numbers were never high. Daimler’s TE20 of 1912 was primarily available in a limousine configuration, used by royalty and the wealthy around the world. Power came from a 3308cc in-line four cylinder engine with Knight valve gear, producing 15kW (20 hp) and driving the rear wheels via a four-speed manual gearbox. Top speed was said to be 60 km/h (37 mph). Daimler’s trademark fluted radiator top was first seen in 1904 and developed from its use of heavily finned water-cooling tubes slung externally at the front of the early cars. Later, a more conventional, vertical radiator had a heavily finned header tank, and eventually these fins were echoed on the grille shell itself. Daimler TE20 production ended production in 1915 with 13 examples made, of which it is believed only four complete cars still exist.

Now well over 100 years old, this 1912 Daimler TE20 was imported to Jackson Motors (Launceston, Tasmania) as a rolling chassis and bodied locally as a Tourer for its first owner, Theresa Cox of Evandale, the first licensed female driver in Tasmania. The big Daimler was first brought to Victoria in 1918, then commuted back and forward between so that the Cox sons could attend Geelong Grammar, and the family visit its property holdings, in Victoria’s Western District. It finally made the mainland home from 1921, moving from Geelong to Nareen (where former Prime Minister Malcolm Fraser famously had a property) in 1935, where it was used for a further 10 years before being left for scrap because of a gearbox problem. The TE20 Tourer’s second owner, Eric Grant, found it on the Nareen property in 1959, the chassis cut at the back, and the engine and dash separate along with piles of parts. And so began a ground-up restoration that took 28.5 years! Grant had the Daimler back on its wheels by 1960 and after initial bodyless runs sitting on a fruit box, two seats were installed for its rally debut to Sorrento later that year. The 20hp four-cylinder engine was reconditioned along with the four-speed manual gearbox and the rest of the mechanicals, while a new wooden frame was created by Russell Mee. Restorer Grant then undertook body building classes in Melbourne, taking four years in the early ‘80s to recreate a steel Tourer body like that which it wore originally. It then went for painting in its original black. Eric also made all the Burr Elm woodwork for the interior before Grant White did the new black leather upholstery in 1984. For years later White also did the tan soft top roof. By then the Daimler had made its official return to the road on Australia Day in 1985. Known as “brass era” cars, this veteran Daimler certainly earns that appellation with its huge brass headlights, its side lamps, horn, and myriad of brass fitting inside and out. There are amazing details like a bar hidden inside a cabinet built into the back of the front bench seat, a cigar lighter, two crystal vases in the back and a solid silver vase up front! In 1999 the Daimler passed onto its third and final owners, where further mechanical restoration took place, before again it became a regular on vintage and veteran rallies across the country. Now presenting as an older restoration, the Daimler’s paint and trim show the passage of time, and these could be left as is or given a bit of attention. It also comes with side curtains, two spare wheels, assorted spares and a fascinating document outlining its history and restoration. A Daimler historian believes this to be one of only four complete cars still in existence, from the 13 originally made. The 1912 Daimler TE20 Tourer is being offered for sale here unregistered. 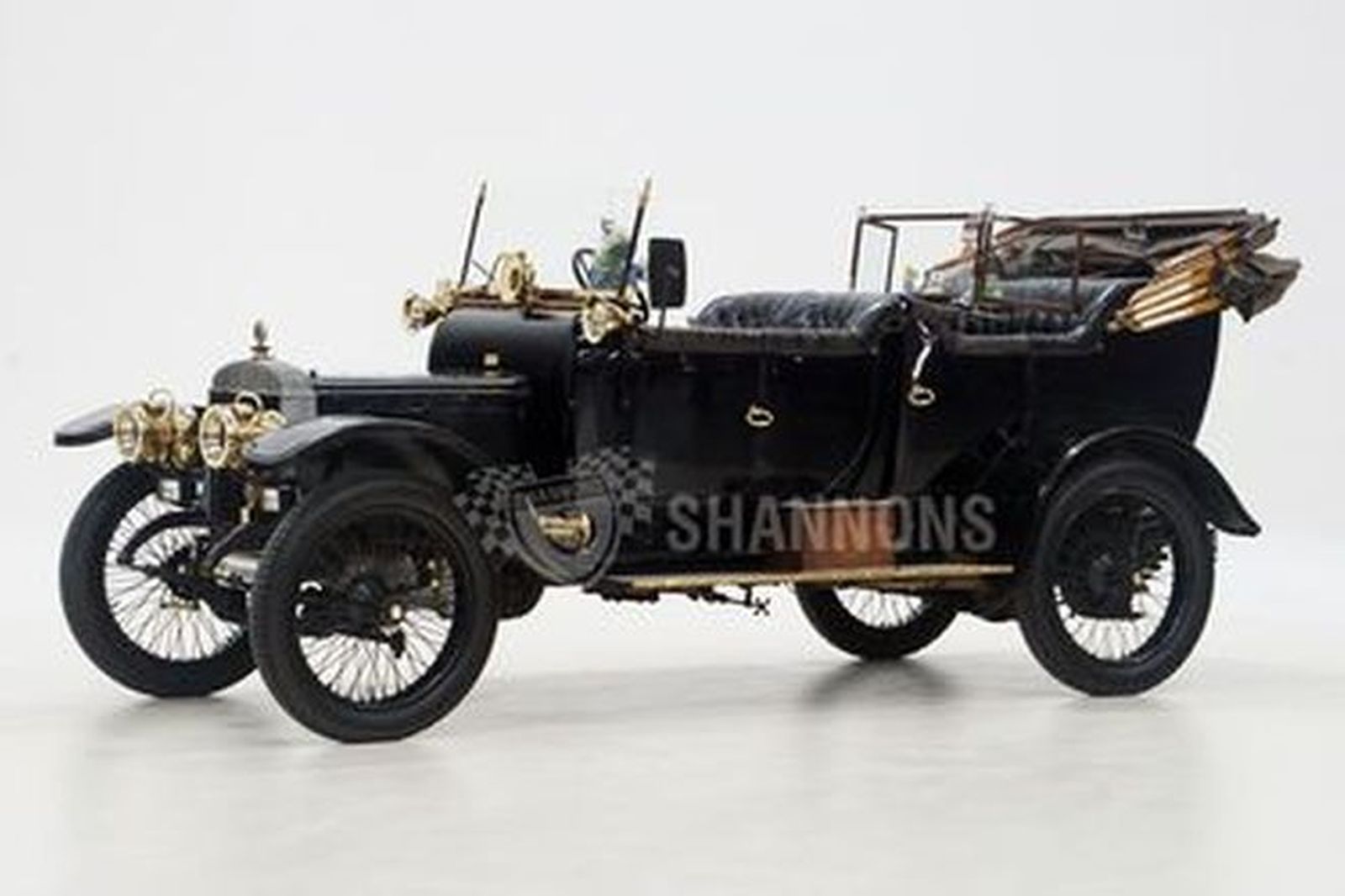