3275 people have viewed this lot

Launched in 1928 to compete in what was described as the "low-priced" market segment dominated at the time by Chevrolet and Ford, Plymouth Chrysler Corporation’s response. It became the high-volume seller for Chrysler, primarily sold in the United States, before being retired in 2001. Plymouth was introduced at Madison Square Garden (New York) on July 7, 1928, but its origins can be traced back to the Maxwell automobile. When Walter P. Chrysler took over control of the troubled Maxwell-Chalmers car company in the early 1920s, he inherited the Maxwell as part of the package. After he used the company's facilities to help create and launch the six-cylinder Chrysler automobile in 1924, he decided to create a lower-priced companion car, using lessons learned when he was running Buick under William Durant at GM. So, for 1926, the Maxwell was reworked and rebadged as the low-end four-cylinder Chrysler "52" model. In 1928, the "52" was once again redesigned to create the Chrysler-Plymouth Model Q (as here), although print advertisements called it "Plymouth" only. The "Chrysler" portion of the nameplate was dropped with the introduction of the Plymouth Model U in 1929. The Chrysler-Plymouth Model Q was powered by an in-line, four-cylinder engine displacing 170ci delivering 45 horsepower at 2800rpm. It used solid valve lifters, three main bearings, and a Carter carburetor. The engine was backed by a three-speed sliding gear transmission with spur gears and a single plate, dry clutch. Hydraulic brakes on all wheels provided the stopping power. Wood spoke wheels were standard and wire wheels were optional. Body styles included a roadster (with or without a rumble seat), deluxe coupe, two- or four-door sedan, standard coupe, and a tourer.

This Plymouth’s history can be traced right back to its original owner when new, a farmer from Sidonia (near Kyneton, Victoria) who used it only lightly. His nephew, from whom the vendor purchased the Holden-bodied roadster, recalls his uncle taking short local trips including into Kyneton every Saturday to place bets with the local S.P. bookmaker! The 1928 Plymouth Model Q roadster also visited the races at Woodend, Hanging Rock, Mooney Valley and Flemington, and it was on one of these excursions in 1937 when, on a wet night, it overturned at Corkscrew Hill (between Diggers Rest and Gisborne). The Plymouth’s roof bows, and windscreen were broken and there was some other minor damage, all quickly fixed. The 170ci four-cylinder engine was then rebored in 1946 by Easton & Raymers, the Kyneton Plymouth dealers, and the roadster continued to be used by its original family owners until the vacuum tank linkage became worn and it was put on blocks in 1968. Rescued by the vendor, the Plymouth was brought back to life with a thorough refurbishment. Notable features include the rear ‘rumble seat’ with ‘steamer’ style trunk mounted at the back ‘continental kit’ style, and a genuine Gulbransen period radio fitted below the dash. It’s fitted with a 3.9 diff for longer-legged cruising and has been converted to 12 Volts, plus indicators have been fitted to make it more suitable for modern day traffic conditions. Finished in dark green-over-cream, the Plymouth’s paintwork is presentable but a little untidy around the edges, while the roof and side curtains are in good nick. So too the wooden-spoked wheels. Inside, the trim is tan leather and in nice condition, with black rubber matting on the floor. The trunk out back is travel stained and it presents well enough, though some TLC would soon tidy up some of these details. It comes with a toolbox and various paperwork. A rare car, with an Australian-made body and local history, this 1928 Plymouth Model Q roadster is ready for its next enthusiast owner. Previously on Victorian club registration, this 1928 Plymouth Model Q roadster is being sold here unregistered and with no reserve. 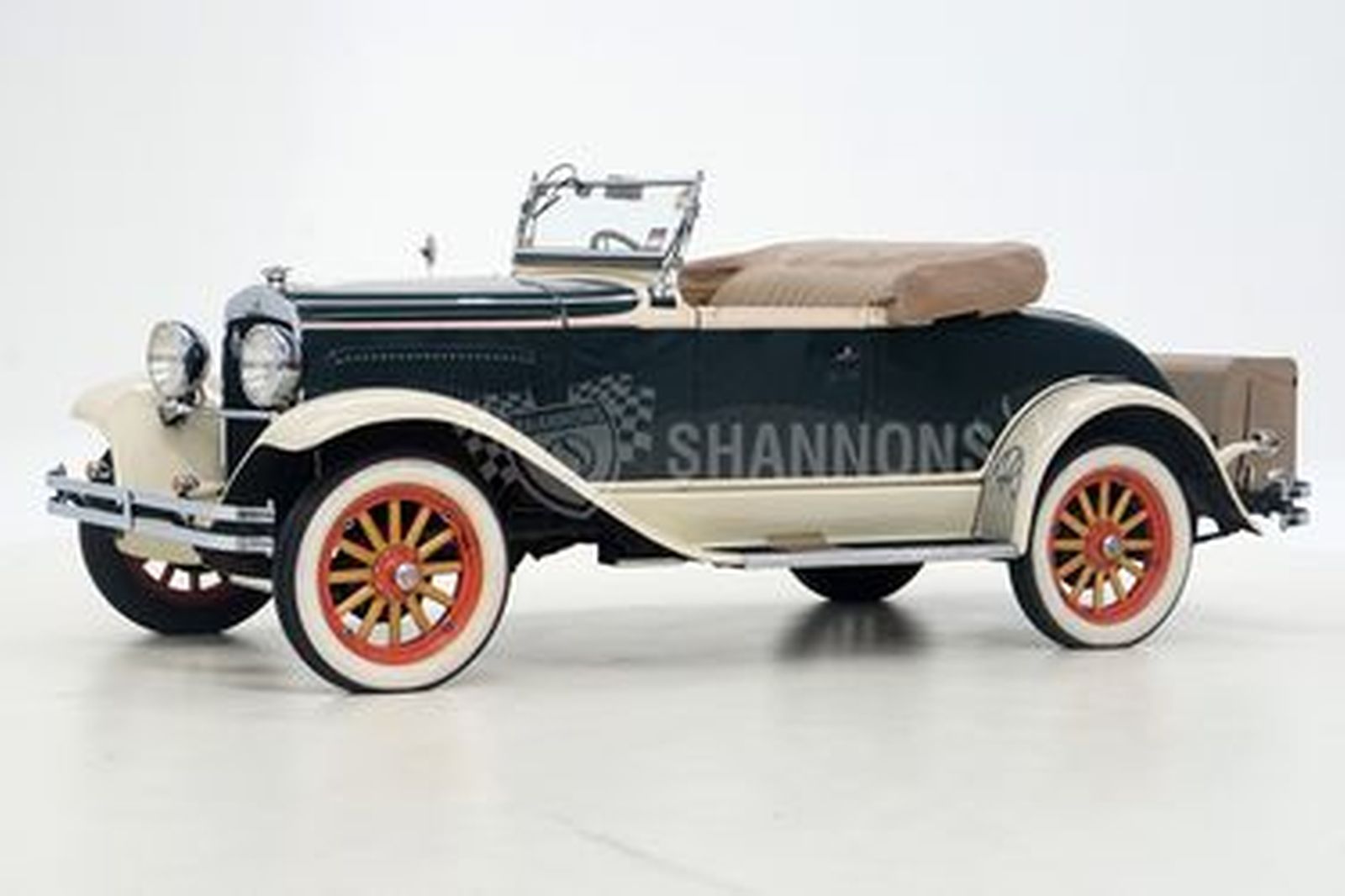