857 people have viewed this lot

Chevrolet’s 1958 model range adopted an all-new “Safety Girder” chassis frame along with significant engineering revisions and completely fresh styling.  Longer, lower and wider than the previous ’57 Chevrolets, the new look started with quad headlamps and was, with the usual range of two and four door sedans, station wagons and hardtop coupes offered.  There were three distinct lines available in 1958 – starting with the entry level Del Ray 1200 Series, the mid-range Biscayne 1600 Series and the upmarket Bel Air 1800 Series.  Replacing the popular mid-level 210 series, the new Biscayne rode on a 117-inch wheelbase, boasting additional brightwork and more upmarket interior trim.  Sold with a wide variety of six-cylinder and V8 powerplants, Chevrolet’s fabulous 283-cid small-block unit, rated at 185 horsepower at 4200 rpm, proved a popular choice with customers.  Optional units included the Super Turbo Fire V8 rated at 230 horses, the Ram-Jet Fuel Injected version of the same (rated at 250 horsepower), and two big block 348-cid units (the 250 hp Turbo Thrust unit and most powerful Fuel Injected Super Turbo Thrust V8 rated at 315 hp), along with a choice of three-speed manual, two-speed Powerglide or Turbo Glide automatics.  In its debut year, Chevrolet managed to shift 377,000 Biscaynes, helping the Bow Tie regain top spot in the sales race from Ford and a small number of these cars made their way to Australia when new, produced in Canada in right-hand drive configuration and assembled by GM-H locally.  Billed as “The Most Glorious Experience of Your Motoring Life… It’s Longer! It’s Lower! It’s Lovlier by Far!”, all ‘58 Chevs sold in Australia came from the Oshawa plant with six-cylinder power and manual tranmissions.

Assembled in Brisbane and originally finished in Ascot Grey, this classic American cruiser has benefited from extensive mechanical and cosmetic restoration over the years.  Although no details are available about who performed the work, the quality of the paint and upholstery speaks for itself; the two-tone burgundy and white pearl shows very well and is almost free of blemishes or scratches, while the interior has been re-done in matching two-tone leather hides with vinyl inserts and shows minimal wear.  The cabin also has fresh carpets and headliner, along with a period Air Chief push button radio and the advantage of integrated air conditioning, along with a modern water temperature gauge and tacho.  The nicely detailed engine bay is clean and the boot area has been fully lined and carpeted, plus new rubbers.  The only item requiring attention is the rear bumper, which needs to be re-chromed, but the remaining brightwork is all in good condition.  Mechanically the Chevrolet has been improved with a disc brake front end and runs a 283-cid V8 (identified by the casting numbers on the block) with Edelbrock rocker covers and 4-barrel Holley carburettor, plus a twin exhaust and improved cooling system.  Purchased by the current Sydney owner approximately five years ago, the car has been maintained in good running condition and driven sparingly.  A rare find, this locally-assembled Biscayne is currently fully registered in NSW until May 2020 and will be sold with No Reserve.
Note: Shannons advise that all potential buyers research all vehicles before purchase to authenticate originality. 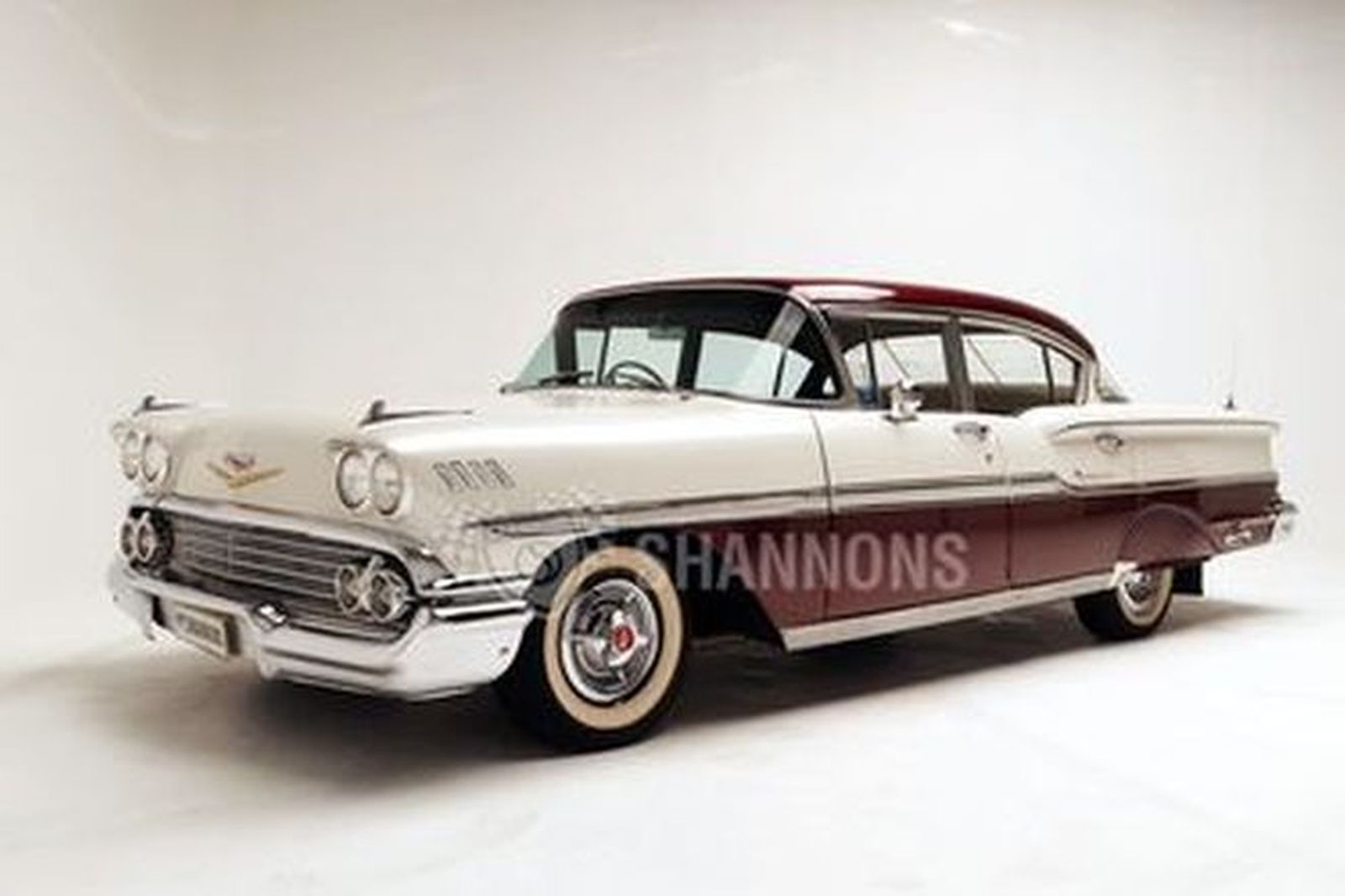