2879 people have viewed this lot

When Chevrolet unveiled the Corvette in 1953, Ford was already well under way developing its retort, launching the stylish new Thunderbird at the Detroit Auto Show in February 1954. Less overtly sporty, the Thunderbird was more a personal luxury car, the two-seat roadster offering a good deal more equipment with niceties like power windows, steering and brakes and even a four-way seat. Compact in dimensions with crisp, clean lines, the Thunderbird was powered by Ford’s all-new Y-block V8 engine and came with the choice of a three-speed manual, overdrive or automatic transmission. Manual cars had an 8.1:1 compression version of the 292ci V8 with a Holley downdraught carburettor, developing 193 hp at 4400 rpm, while those T-bird’s equipped with the Ford-O-Matic transmission were given a higher compression (8.5:1) engine rated at 198 hp to overcome the power loss. Ford made a big effort to dress up the engine bay of the Thunderbird, with plenty of chrome on the trademark domed air cleaner and cast aluminium rocker covers. All Thunderbirds came with a removable fibreglass top featuring distinctive porthole side windows, with a folding rayon hood optional. Although the T-bird’s high price of $2944 meant it was always going to appeal to a small but well-heeled group of buyers, the new Ford handily outsold the Corvette in 1955 (16,155 units versus just 700) and it was only the introduction of a V8 version that saved the latter from extinction. Having made only minor changes in 1956, Ford decided to revamp the Thunderbird for 1957, with the spare relocated inside the boot for better handling and the tail completely restyled with prominent wings. The interior also came in for revision, with the instrument cluster lifted from the ’56 full-size model range and an engine-turned dash panel. Production of the T-Bird rose in 1957, with 21,380 examples made, and it remains one of the most instantly recognisable – not to mention collectible – American cars of the 1950s.

If you’re looking for something that wouldn’t take too much work to add value and appeal, what about this neat and largely original 1957 Ford Thunderbird? Complete with the iconic ‘porthole’ lift-off hardtop and rear spats, this example is a mix of the original such as the doortrims and much of the chromework, with the improved black paint, newly retrimmed benchseat and new black carpets. Lifting the presentation of this black with two-tone black and white vinyl interior would be straight forward … redoing the doortrims, adding some wide whitewalls, tidying up the marked paint and chrome, and giving some of the cabin furniture a refurbish. Still in its original left-hand drive, everything is there, it’s complete in detail and ready for some love. Recent work has included a carburettor rebuild and new brake shoes all ‘round. It’s a classic design of the period, a real head turner that could be driven as is or as noted, improved with a little TLC. This 1957 Ford Thunderbird convertible is being offered for sale here unregistered.
Note: Shannons advise that all potential buyers research all vehicles before purchase to authenticate originality.
*The Bid Extension rule applies to all lots 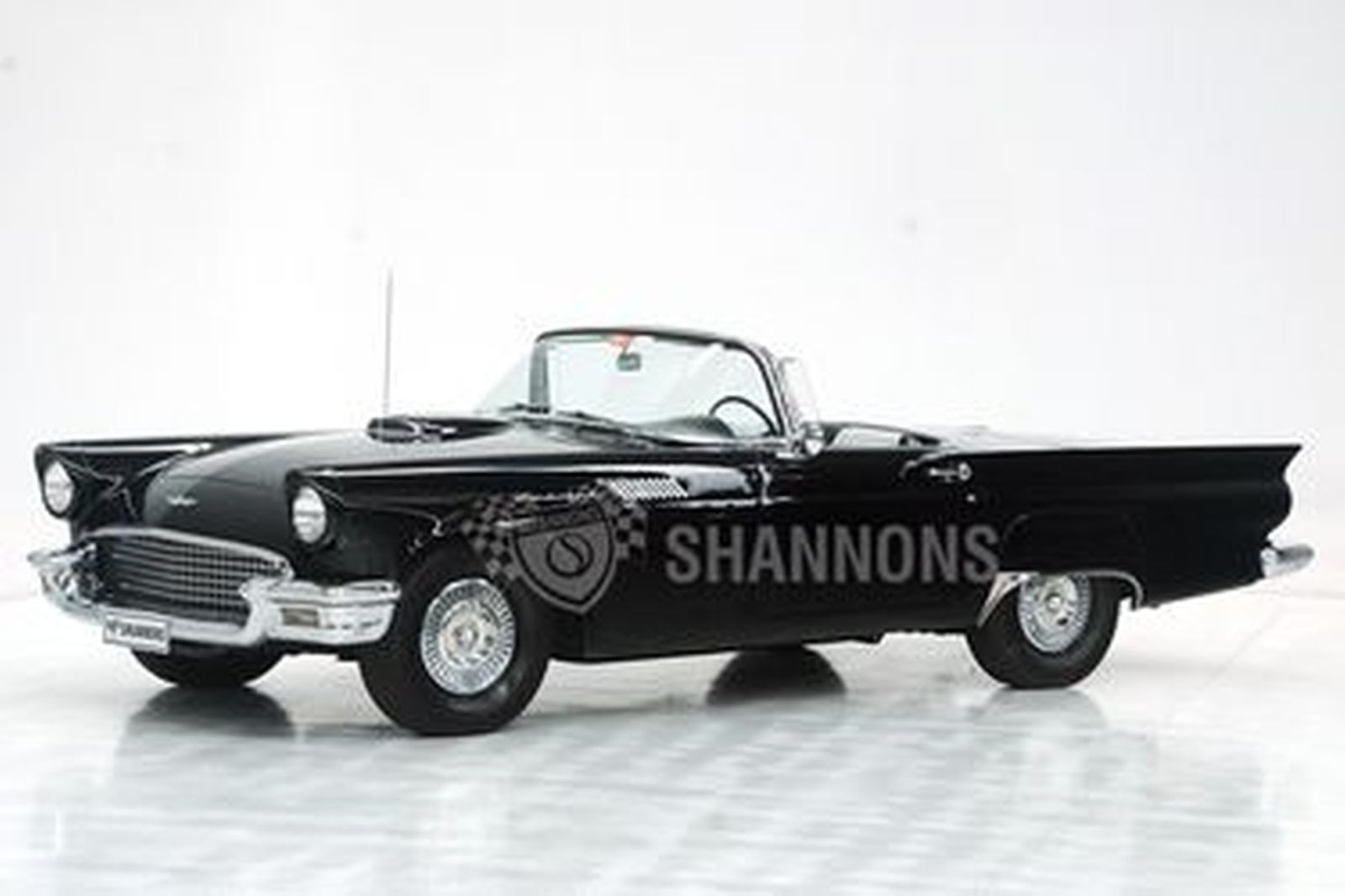